Home LDS Being LDS Mika talks about his mission call, friends and mentors

Mika talks about his mission call, friends and mentors 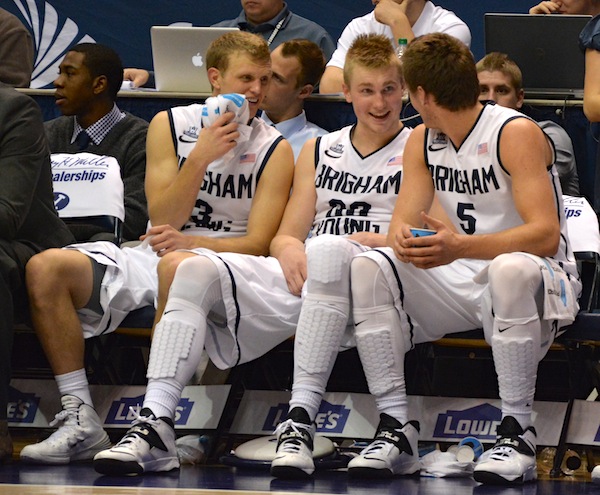 This season will be Eric Mika’s (center) only chance to play with future BYU hall of famer Tyler Haws (left) and Kyle Collinsworth (right) as both players will be graduated when Mika returns from his LDS mission. (Photo by Rebecca Lane)

In what’s been an eventful freshman season, BYU forward Eric Mika has plenty to look forward to in the coming days, weeks and years.

While he’s finishing up his first season with the Cougars, hoping his team plays deep into March, he’s eagerly awaiting his LDS mission call.

“I’m really excited,” Mika said. “I’ve been planning on a mission my whole life, so to have (his mission papers turned in) finally feels good and exciting.”

Mika is also excited about being reunited with his former Lone Peak High teammates at BYU when he returns home from his mission.

One of those teammates, Nick Emery, is serving a mission to Germany. Another, T.J. Haws, is a senior at Lone Peak and will leave for his mission soon.

The trio will be play together again — this time wearing blue and white — for the 2016-17 season. 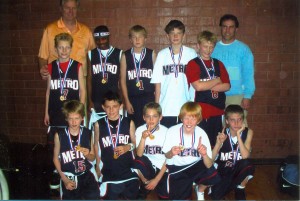 “It’s going to be fun. Not only are they really good on the court, but we mesh well,” Mika said. “They are some of my best friends from high school. All those guys, the last two years of my high school career I spent every day with them.”

Led by Mika, Haws and Emery, the Knights won the high school national championship a year ago.

The team’s improbable rise to national prominence, thanks to impressive victories over some of the country’s top programs, catapulted Lone Peak basketball to a whole new level. The Knights were featured in articles in The New York Times and a segment on “The Today Show.”

Filmmakers Zack Samberg and Ben Altarescu captured Lone Peak’s unforgettable season in the recently released documentary “The Book of Lone Peak,” which is available on iTunes.

Mika was happy with the way the film turned out.

“I think it’s awesome. It’s really well-made and it sends a good message,” he said. “The people who did it, the Samberg family, is a great family. I had an awesome experience filming it and watching it, too. It’s cool to take a step back and realize what we did last year, which I hadn’t done.”

He added that it was a little surreal to see himself, and his teammates, in a movie.

“I kind of don’t really believe that it all happened. And that’s why the movie is nice because you get to look back and realize what we accomplished last year. We’re fortunate to have that opportunity. It was a fun year. It’s all wrapped up in a box for us to watch. The first couple of days it was out it was the No. 1 short film on iTunes. I’ve watched it bunch of times with my family and they love it.” 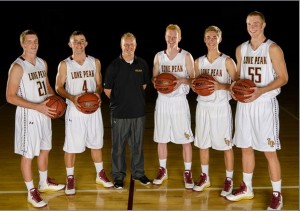 In that documentary, T.J. Haws said something that was music to the ears of BYU fans everywhere.

“There’s no reason why we couldn’t do what we did (last year) on the next level,” he said. “People didn’t think we could do it on a high school level and I guarantee people aren’t going to think we can do it on the college level.”

Making that happen is still a few years away.

For now, Mika is adjusting to the college game.

“It’s been fun. I wouldn’t trade it for anything,” he said of his freshman year. “It’s been really fun getting to know all these guys and the coaches. Every day is a blast. I love it.”

Mika credits Lewis, for helping him get ready for Division I basketball.

“The biggest thing he did was getting me to run. At my old high school, we played kind of a slower offense. I inbounded and jogged up (the court) as the five. When I got to Lone Peak he said, ‘No more of that.’ So I got used to running and playing in a faster offense.”

In November, Mika became the first freshman to start a season-opener for BYU since 1998. This season, he’s averaging 12.3 points and 6.4 rebounds. 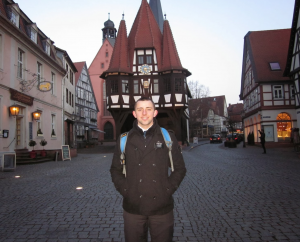 Because former Lone Peak teammate Nick Emery entered the mission field directly from high school, he will play one season without Mika. Both Emery and Mika will play their sophomore seasons during the 2016-2017 basketball season. (Photo courtesy eldernicholasemery.blogspot.com)

Certainly, there have been setbacks and trials along the way.

Just a couple of weeks into his freshman campaign, Mika suffered a right eye abrasion in the final minutes of a loss at the Marriott Center to Iowa State when he was jabbed in the eye by DeAndre Kane, who was whistled with a flagrant 2 foul and ejected.

At the time, Mika called it “the most painful thing that’s ever happened to me.” He suffered a right eye abrasion and in the next game against Texas, he wore protective goggles, purchased at a sporting goods store in the racquetball section.

“Eric’s a warrior inside,” guard Tyler Haws said after Mika scored 15 points and grabbed seven rebounds in a win over the Longhorns. “He’s not intimidated by anyone. Even if he gets knocked down, or gouged in the eye, he’s just going to keep coming back at you.”

Mika was fortunate that his eye injury wasn’t more serious. An eye scan performed on Mika revealed that nothing was fractured, and there was no bleeding.

In the hours after sustaining the injury, Mika said his eye “killed. All night, there was tons of pressure around my right eye. When I was on the ground (right after the play), I thought I was blind because I tried opening my eye and I couldn’t see anything out of it for about a minute until they pushed blood into it. That was pretty scary.”

“We’re fortunate that he’s able to play after that injury, because it could have been a lot worse,” said BYU coach Dave Rose. “Any time you have an eye injury, you worry about being able to come back.”

Then in early January, Mika jumped high in the air in attempt to block a shot by San Diego’s Johnny Dee and landed hard on the floor, resulting in a hip injury that sidelined him for a couple of games.

One of the themes of Mika’s freshman season is the physical play he’s both dished out and absorbed, particularly in conference play.

For example, in the final minute of the game against Saint Mary’s in Provo, the Gaels’ Garrett Jackson was ejected for hitting Mika with his forearm. Mika has been shoved, elbowed and slapped this season.

When asked about it, Mika shrugs it off as being part of the game, especially in conference play.

In last week’s comeback victory at Saint Mary’s, Mika recorded a big blocked shot late in the game that helped give the Cougars momentum down the stretch.

When the game ended, Mika made the “choke sign,” which wasn’t well-received in some circles.

Yes, it’s been an eventful season for Mika.

And Cougar fans are looking forward to watching Mika, Emery and Haws take BYU basketball to new heights in a few years.