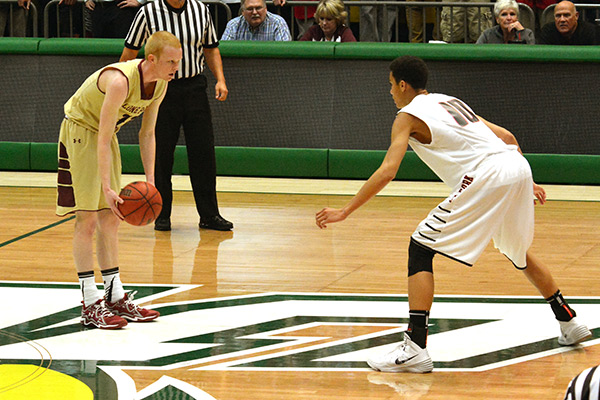 Marty Haws, dad to both TJ and Tyler Haws says, “Tyler can score from anywhere, around the basket or behind the 3-point line. TJ is a little better with the ball in his hands but I think both are equally effective.” (Photo by Matt Bennett)

He will score over 20 points a game and when he’s really feeling it he could double that. He will draw a crowd, face double and triple teams and go up against a variety of defenses that have been designed to minimize his damage.

He will pull up from 25 feet and it will go in. He will come up with a steal, hand out a few assists and maybe throw down a dunk.

He will have a typically TJ Haws night and Lone Peak will win.

Happens all the time.

Perhaps with the exception of Nick Emery and Tyler Haws, no one has spoiled Lone Peak fans in the way TJ Haws has been able to do.

Now that his high school career is just two weeks away from ending the speculation will begin. What type of player will he be for BYU? 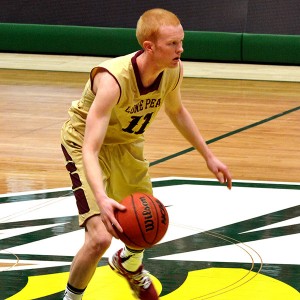 While Tyler Haws has played two guard or small forward for BYU, TJ will most likely play at the point, or possibly at two guard. (Photo by Matt Bennett)

If he is anything like Tyler, his older brother, BYU fans should be scrambling to renew their season tickets.

Tyler, a 6-5, junior guard has emerged as the team’s top scorer. He’s averaging 23.6 points per game and has a 3-point shooting percentage of .443.

The Haws brothers know the comparisons are inevitable but BYU fans should not expect TJ, who is 6-4, to be a Tyler Haws clone even though their high school careers have been remarkably similar.

Both started as freshman at Lone Peak High School. Tyler averaged 9.2 points per game while TJ averaged 13.8. As a sophomore, Tyler bumped up his scoring average to 18.8 while TJ’s went up to 17.4.

Tyler finished with 1,778 career points. TJ has 1,174 with one game left in the regular season.

There is one other thing the brothers have in common – bling, bling – state championship rings.

Tyler has two, TJ is working on his fourth.

“They are very different players. The thing they have in common is they are both mentally tough. They are both very consistent and very hard to rattle,” Lewis said. “Tyler is a better rebounder. He’s a guy who comes off screens and scores off set plays. TJ is a very good passer and will get more shots off the dribble and score more in open situations. It’s hard to say that anyone is going to score as much as Tyler has (at BYU), but both are fantastic players.”

No one has a better feel for their similarities and their difference more than their father Marty, who put a twist on the phrase, “Like father, like son(s).”

Marty was a guard on BYU’s basketball team (1986-1990) and paved the way for his boys to follow in his footsteps.

“Both are similar in the way they are relentless scorers and they both have a knack for figuring out ways to be productive for their teams,” Marty said. “Tyler can score from anywhere, around the basket or behind the 3-point line. TJ is a little better with the ball in his hands but I think both are equally effective.”

Tyler will be gone by the time TJ suits up for the Cougars because TJ plans on serving an LDS Church mission following graduation. He would then be back and ready to play for the 2016 season.

“TJ needs to get stronger and that’s where I think it will be an advantage for him to go on a mission right out of high school,” Marty said. “He has two and a half years before he puts on a BYU uniform and I think that will give him time to get naturally stronger that comes from growing up.”

When TJ does return, his father expects him to have an immediate impact with the Cougars, but it won’t be in the same way Tyler has helped BYU.

TJ is a point guard/two guard combination while Tyler is more of a two guard/small forward. “I know a lot of people are excited about that recruiting class,” he said. “We expect he will come back and be part of what BYU is doing, absolutely.”

Even though that may sound like dad-speak, Marty isn’t saying anything most people don’t already believe. TJ is ranked No. 50 in ESPN’s national individual player rankings.

While TJ prepares for his BYU career, Tyler is grooming his game for the NBA. Another productive year could give him a shot at making an NBA team.

In the meantime, Marty is enjoying watching his boys succeed at the highest level and what only adds to his experience is the fact that he knows he’s not the only one who is enjoying the view.

Killing flies, getting 'beauty sleep' and other Personal Progress requirements of old Next post