Home Things To Do Events 2014 race schedule in Utah Valley 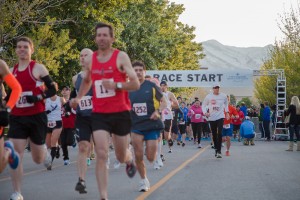 With spring right around the corner, the 55-plus races in Utah Valley from now until the end of the year should help us all to come out of hibernation. (Photo courtesy Thanksgiving Point)

Nearly every weekend from now until the end of the year, a race could be run near you. Utah Valley is home to 55 races and counting. Utah Valley races are diverse and plentiful — from a glow-in-the-dark fun run to intense trail runs, there are more races than ever in the valley.

Why such a race craze? Local running expert Amber Andrews, manager at Runner’s Corner in Orem, explained that running is the easiest sport. And a race adds motivation to your fitness goals.

“It’s the only sport that you can just walk out your door and start,” Andrews said. “You don’t need a field, you don’t need a teammate, you don’t need gear.  You could go out and run with nothing.  It’s the easiest form of exercise and people are seeing that.” To get a real run for your money this year, check out these races in Utah Valley (organized by date):

For your running entertainment, read our humorous account, ” 15 signs you run in Utah County.”

Lake living: 10 reasons to live by Utah Lake Next post