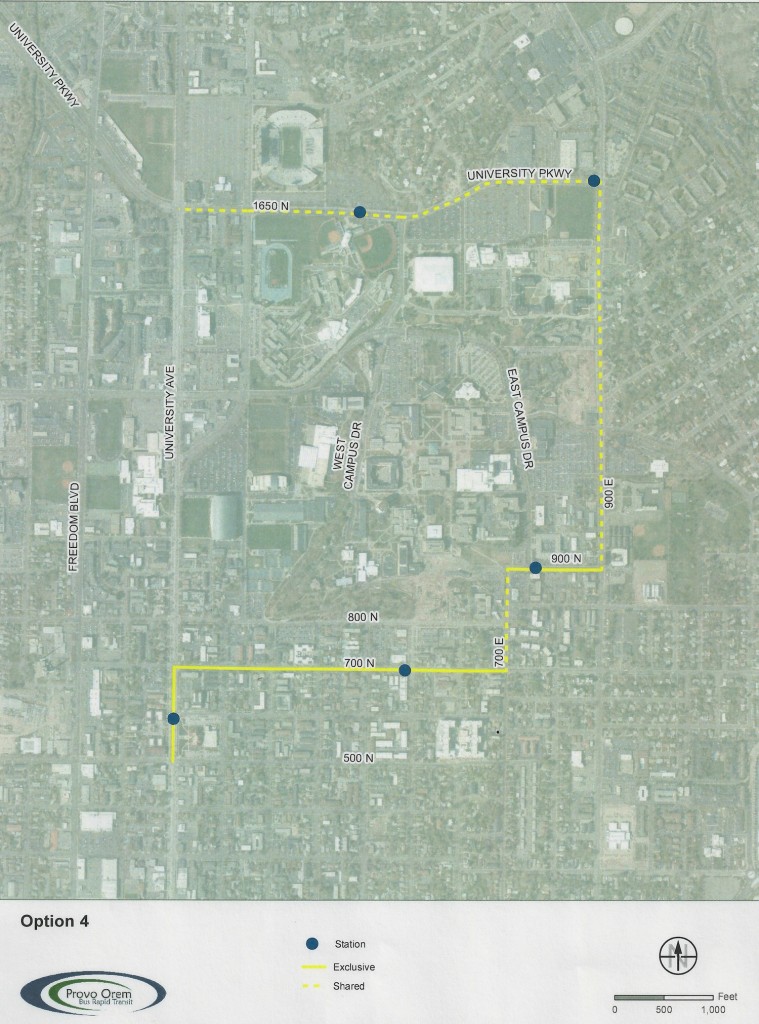 A few weeks ago when the Provo Municipal Council voted 3-4 against supporting UTA’s preferred route for bus rapid transit, five Provo residents started working on a plan to show that Provo residents really do support the route.

UTA and mayors from around Utah County, who agreed to funnel $75 million in transportation funding to the project, have said Route 4 is the only route that makes sense and would be the best contender to get the additional $75 million in federal funding needed for the project.

If the group gets enough signatures — they’re aiming for 3,000 but only need 2,970 — in November Provo voters will be able to accept or reject Route 4. They have 45 days — the beginning of April — to gather the signatures of registered Provo voters, which will then be verified.

“It’s a full-court press to gather signatures; we need to gather more than we need,” Hall Everett said.

The group has been taking on volunteers, who will soon be going door-to-door gathering signatures on the petition.

They’ve also started a petition on change.org. As of Friday afternoon, more than 80 people had signed that petition.

Hall Everett said the change.org petition and another petition on the website are for people who can’t vote in Provo, such as non-resident students or people who only work in the city but live elsewhere, so that they can show the Provo council that they support the BRT route.

“There’s been a huge outpouring of concern from our community,” she said. “They really recognize the challenge of funding. The funding opportunity is now.”

One problem is that the application for federal funding is due before the November election, but Hall Everett said they’ll still be able to show UTA that there’s a “surge of community support” with the petition signatures.
However, all the effort would be halted if the council on Tuesday changes course and votes to support Route 4, she said.

“It would be hard to ignore the excitement” in the city surrounding Route 4, she added. Council members have been meeting with UTA and meticulously going over the data the agency compiled in researching a preferred route for BRT.

Two weeks ago at the council meeting, UTA stated that the construction cost for Route 4 would be $6.9 million with an annual operating cost of $213,000. UTA projects the route would have 12,900 daily riders.

The four members of the council who voted against Route 4 — Kim Santiago, David Sewell, Kay Van Buren and Stephen Hales — wanted UTA to consider a route that didn’t involve taking the larger buses across 900 East.

One of their suggestions was for a BRT route that stuck to University Avenue to University Parkway, called Route 0. It would provide buses to take a one-way, right-turn-only loop east from University Avenue, across 900 East and back down to University Avenue. According to UTA, construction for Route 0 would cost $10.8 million and annual operating costs would be $693,000 plus funds for the buses to Brigham Young University. Daily ridership is predicted at 11,400.

While there are merits to Route 0, Hall Everett said, the data shows that Route 4 gets more people where they need to go.

She said this isn’t a project that can slow down or wait — it’s been in discussion for many years and the funding opportunity is now. And that’s why she got involved in the petition effort.

“It’s too important of a project to have sat back and put at risk the funding,” she said.

To get more information about the petition referendum or to volunteer, go to brt4provo.com.