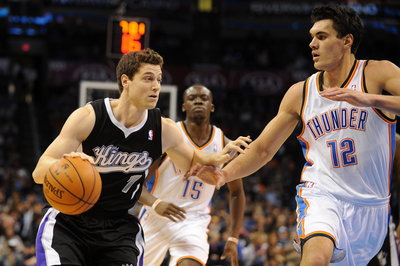 Jimmer Fredette, who was signed by the Sacramento Kings right out of college, dribbles the ball in a game. (Photo by Mark D. Smith/USA Today Sports)

Former athletes of Brigham Young University have a knack for excelling professionally as well as for leaving their legacies in Provo. Names like Steve Young, Ty Detmer and Danny Ainge headline the BYU record books. They also make their own legacies of stardom at the next level, including championships, MVPs and years of playing at a high level.

Another generation of BYU athletes playing in professional sports appears to be at the cusp of exploding into professional stardom, provided they are given opportunities.

Jimmer Fredette, college basketball’s 2010-11 National Player of the Year  and winner of nearly every other individual award, launched both himself and the BYU basketball program into a national spotlight, scoring 25.9 points per game, while shooting 45.2 percent from the floor, 39.6 percent from three-point range and 89.4 percent from the line. He led the Cougars to their first appearance in the NCAA Sweet 16 since Ainge did the same in 1981. Fredette was drafted 10th overall by the Sacramento Kings and has spent the last three seasons competing for playing time and shining in intermediate spurts.

Is it surprising Fredette is shooting better in all three categories in the NBA this season than he did during his sensational senior year at BYU? Fredette is shooting 47.7 percent from the field, a blistering 49.3 percent from distance and an automatic 94.1 percent from the charity stripe. However, despite his numbers, Fredette was playing just 11.5 minutes per game. Fredette worked through a buyout with the Sacramento Kings and immediately signed with the Chicago Bulls on Saturday as soon as he cleared waivers. Fredette scored two points off 1-for-2 shooting in his debut game Sunday with the Bulls and instantly became a fan favorite.

In addition to his great shooting numbers, Fredette set a career high 24 points in his home state of New York in a win over the Knicks, causing many fans to take to Twitter exclaiming for another dose of Jimmermania. With the opportunity to find a new role on another team for next season, Fredette is poised to once again explode on the national stage. 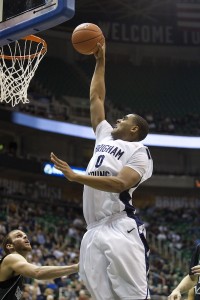 Brandon Davies dunks the ball in a BYU basketball game. Davies signed with the Philadelphia 79ers out of college. (Photo by BYU Photo)

Brandon Davies, a two-year teammate of Fredette’s at BYU, went undrafted out of college, but eventually found a final roster spot for the Philadelphia 76ers. Davies impressed NBA scouts with his footwork in the post and his ability to knock down the jumper extending all the way out to the 3-point line. The 6-10 forward is averaging 11.5 minutes per game scoring 2.5 points and grabbing 2 rebounds per contest. While the numbers don’t stick out, the undrafted forward has shown he has some serious potential, especially in a game at the Brooklyn Nets, where Davies logged nine points, six rebounds and three steals in 16 minutes of action. He also scored a career-high 11 points against the Cleveland Cavaliers. If Davies can keep up his current curve, he could soon see a lot of time as a key player.

One of the best sports stories of the 2012-13 football season featured the meteoric rise of Ezekiel “Ziggy” Ansah at BYU. The Accra, Ghana, native, who knew nothing about the sport of football when he emigrated to the United States, found himself the fifth overall pick in the first round of the NFL Draft just five short years later. Ansah displayed his scary combination of speed, power and athleticism at BYU, chasing down running backs and busting up plays before they got started, causing NFL scouts to salivate over his raw talent and potential. In his rookie season with the Detroit Lions, Ansah recorded 32 tackles, eight sacks and two forced fumbles. Literally just starting out in football and already showing the disruption he can cause in the offensive backfield, Ansah has shown the sky is the limit. NFL fans should expect Ansah’s name to be mentioned many times in the next few years.

Finally, while several college baseball players are drafted into minor league baseball teams, the majority rarely move past the small time teams. However, Jacob Hanneman might have the best chance of any recent BYU baseball player of making it to the big leagues. The dual-sport athlete also played on the BYU football team. He only played one year of baseball in Provo, but he impressed baseball scouts. The freshman outfielder hit .344 for the season, with 74 hits, five home runs and a team-best 53 runs scored. He also stole a team-high 14 bases. 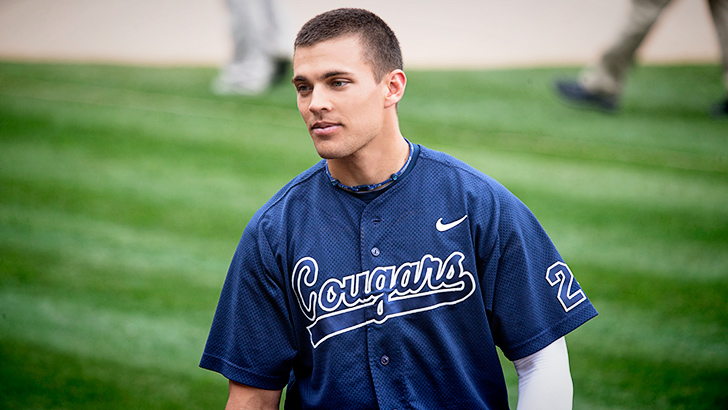 Jacob Hannemann is currently in the Chicago Cubs organization playing mostly for the Boise Hawks of the Class A Northwest League. (Photo by BYU Photo)

Hanneman was eventually drafted as the second pick of the third round (75th overall) by the Chicago Cubs, becoming the highest drafted player to ever come out of BYU. He spent the majority of the 2013 season with the Boise Hawks of the Class A Northwest League. Hannemann recorded 18 hits, one home run, five RBIs and scored eight total runs as well as hitting a team-high two triples during the season. His .290 batting average tied for third best on the team, while his slugging percentage  evened out at .468, good for fourth best on the team. While he has a few more years of proving himself in the minors, his raw potential could see him playing major league baseball.

Already in the show

Dennis Pitta, Brett Keisel and Austin Collie are some former BYU players who have already proved themselves in the pros. Now the athletes mentioned above are prepared to make their run in pro sports.