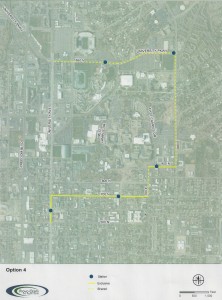 The Provo council is reconsidering BRT Route 4 which would run along 900 East. (Photo courtesy Provo city)

In four weeks, Civil Science will tell the Provo Municipal Council if it can find a better route for bus rapid transit through Provo than 900 East. In the meantime, the Provo council voted 5-2, reversing an earlier decision, to tell UTA that it supports the 900 East route — for now — so that it can keep working to meet a federal funding deadline this summer.

Civil Science, the chosen engineering firm, will evaluate ridership and routes based on the model used by UTA and current conditions. The price tag for the four-week turnaround is $70,000. The firm is familiar with Provo and its transportation needs, said Councilwoman Kim Santiago, because it worked with the city on its master transportation plan.

Because of the tight deadline, the council didn’t consider other firms or put the project out to bid.

UTA’s preferred route and the one now supported by the Provo council, known as Route 4, would take buses from the Frontrunner station, up 700 North and across 700 East over to 900 North and then onto 900 East to University Parkway and then through Orem.

Some people in the Wasatch neighborhood, which is bordered by 900 East, have questioned whether that’s actually the best route. Many have suggested that the buses stick to University Avenue through Provo.

Councilman Stephen Hales said he hopes the outcome of the second opinion isn’t dueling recommendations. He thinks some things have changed since UTA did its initial work — BYU closed the road through campus, putting thousands of more cars on 900 East each day — and there’s a chance BYU student employees were counted as both employees and students in ridership numbers.

Shortly after the council voted 4-3 to spend the $70,000 — councilmen Hal Miller, Gary Winterton and David Sewell voted against it — it voted to reverse itself and support the 900 East option. Without that vote of support, Steve Meyer, UTA chief capital development officer, said the agency would have to stop work on the project because they don’t want to continue working on a project that the city won’t support.

He said there’s engineering work on the project that needs to be done before an August funding deadline from the Federal Transportation Administration, and the sooner the agency can get the project submitted the better. If it had to stop now and wait weeks for another vote from the Provo council, it might not make that deadline.

UTA needs $75 million from the federal government to construct the project. It already has $75 million in local funding that mayors from around Utah County agreed to earmark for the Provo-Orem project.

“If there is some major flaw in the model, we would want to know,” Meyer said.

The two votes against supporting the 900 East route came from Santiago and Sewell.