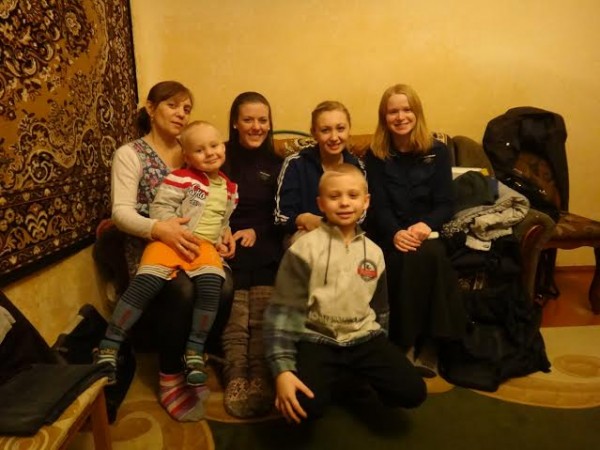 In the last two weeks, Sister Kathryn Webber has been housed in four different cities, confined to a city once, stayed indoors for five days, returned to life as usual once and finally sent home from her LDS mission in L’viv, Ukraine two weeks early.

“I was in shock when I got the phone call, of course,” Webber said. “I didn’t really know what to feel or think. It all happened so fast I didn’t have a lot of time to react.”

Webber, who is from Cedar Hills, was one of 22 missionaries in Ukraine whose missions were cut short because of political unrest in the country. Webber was scheduled to come home in two weeks; all of the missionaries who returned were due to return in March or April. According to a press release from Mormon Newsroom, this helps the four missions in Ukraine accommodate the 23 missionaries who were moved out of the Crimean Peninsula where much of the violence is centered. Missionaries who have been in Missionary Training Centers preparing to enter Ukraine are being temporarily reassigned to other missions or will remain at the MTCs for a while.

Some parts of Ukraine are safer than others, with political unrest and violence centered mainly in the Crimean Peninsula. Webber, who was serving in Western Ukraine, said she felt safe while she served as a missionary but knew Church leaders were inspired. 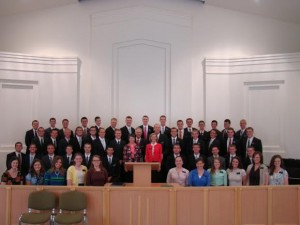 Missionaries in the L’viv Ukraine Mission pose for a photo in July 2013 following the organization of the new mission. (Photo courtesy Kathryn Webber)

“To be honest, I was devastated,” she said. “I wasn’t ready to go home. I had investigators who were doing really well and I had things planned for my final two weeks. My emotions were all over the place — I was really devastated but in some ways I was little bit relieved because I knew how worried my parents had been.”

Webber’s parents told her they felt peace when they thought of her and they trusted mission and Church leaders. But when they turned on the news, it was difficult not to worry. And their daughter was right — the Webbers were more than a little relieved to hear she was on her way home.

“I’ve had peace about this — I’ve never been in panic mode,” said Steve Webber, Kathryn’s father. “I just always felt like she was safe. But we’ve been concerned, obviously. It’s been getting a little dicey. We’ve been glued to the TV and the Internet. The first and last thing we’ve done every day is Google ‘Ukraine news today.'”

The news was never good. Kathryn didn’t know as many details as her parents did, but she was in frequent contact with the mission president who relayed instructions to the missionaries.

“About two weeks ago we got notice that we weren’t allowed to travel anywhere,” Kathryn Webber said. “We didn’t get a lot of information, but we knew protests in Kiev were getting violent.”

“After that I spoke with my mission president and he told me, ‘Just make sure you have all your things organized so if anything drastic happens overnight you can get to the mission office as soon as possible.'”

That Sunday while Kathryn was packing her things, armed men in trucks and armored vehicles were surrounding a Ukrainian military base in Crimea. Kathryn and the four other missionaries who were leaving L’viv attended one final zone conference on Wednesday while a special U.N. envoy cut its mission in Crimea short after armed men ordered them to leave the region. By the time Kathryn arrived in Utah on Thursday, President Barack Obama and the House Foreign Relations Committee were reacting to current events with trade sanctions and visa restrictions against Russia and Russians involved in the violence.

“It was kind of a whirlwind,” Kathryn said.

Meanwhile, Church officials are keeping an eye on current events in Ukraine and ensuring the safety of missionaries who remain in the country.