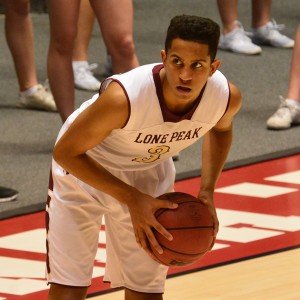 Just when it looked like Lone Peak High School’s basketball program couldn’t be any bigger, now comes this — an all-expense-paid trip to Dubai to participate in the MPAC Elite International Tournament.

The Knights, who are trying to become the first Utah team to win four straight state titles, are one of five teams from the United States to who have been invited to participate in the tournament in Dubai June 15-25.

“It’s quite an honor to be part of that group. It shows the amount of respect we have nationally,” said Lone Peak coach Quincy Lewis. “I think with the popularity of social media and the interest from ESPN and other networks, high school basketball has gotten a lot more exposure and that has led to more opportunities. This isn’t a result of us going out and soliciting. People have been calling us.”

The other four teams invited to participate from the U.S. are Whitney Young and Simeon Academy from Chicago, along with Montverde Academy (Florida) and Huntington Prep (West Virginia).

“I think the invitation has primarily come from our reputation,” Lewis said. “I’m excited for our kids to have the opportunity to experience a new culture.”

The tournament will not be part of an Alpine School District activity. The team will be participating as the Utah Rain, an AAU team.

The players must pay for their flight to Chicago but the rest of their expenses will be paid for by the tournament organizers.

It will be part of a busy summer for Lone Peak. The team will also be participating in a tournament in Kansas City and is also planning on playing in Las Vegas and Los Angeles.

Lone Peak has won six state titles in the last 10 years. After posting a 26–1 record last year the Knights were named as the Max Preps national champions.

Now that Lone Peak has a national reputation, the Knights must work on maintaining it.