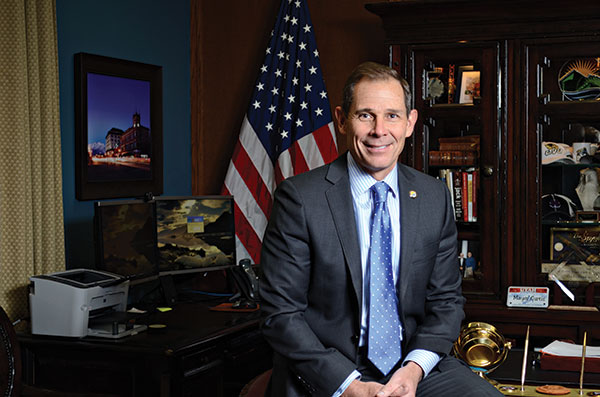 Provo Mayor John Curtis is an open book blog. At provomayor.com, he gives on-the-record insight into life as a crazy-sock-wearing public figure.

In May 2009 when the race to replace 12-year mayor Lewis Billings was heating up, John Curtis had an out-of-the-ballot-box idea. He would start a blog so residents could get to know him.

“I’ve felt all along that if someone doesn’t like me or if they disagree with me, it is OK, as long as they know me,” he says. “That is how the blog was born.”

Mayor Curtis shared with Utah Valley Magazine how technology affects the way he governs the city, what makes his blog worth the effort, and why email is still one of the most effective “social media” tools out there.

UV: You are known for your socks and social-media-savvy. Which online tool is your favorite?

Mayor Curtis: The blog. It was my first personal exploration into social media. It also has the uniqueness of being the right tool for what I’m trying to accomplish. The blog lets me give enough details without giving so much that it’s hard to write or cumbersome to read. A picture that tells the story and a short explanation seems to work as my format.

UV: How do you decide what makes it onto the blog?

Mayor Curtis: Part of the beauty of the blog is the spontaneity. Therefore, we can’t overplan it. Other political blogs are so planned, so stodgy, that they hold no appeal except to those who are already interested in government. We wanted to reach those who aren’t already following local government. Through the blog, we can present their government to them in a way they will pay attention. To do that, we need posts that are quirky and off-the-cuff. For us, the magic is in capturing the moment we didn’t plan. Ironically, about a month ago, we started having a coordinating meeting on Mondays about what will go on the blog that week. With the popularity of the blog has come an increase in the number of requests we get to feature something. But — to our pleasure — rarely what we plan on Monday is what we see unfold by Thursday. That’s part of the magic.

UV: What makes the blog so appealing? How do you explain the magic?

Mayor Curtis: We redesigned the blog a few months ago, and I was hesitant because I felt like the unprofessionalism of it was part of the magic. People want to see behind the curtain. If you polish it too much, you lose that. If you happen to sit on the bus by the mayor and you ask him a question, do you want a canned answer or do you want him to talk from the top of his mind? That’s what the blog is — it’s what’s on the top of my mind. I can say things on the blog I can’t say with a formal camera and the press in front of me. We can joke and we can be quirky and poke and prod at sensitive issues in a way I can’t in any other venue. With the blog, I have a little license to be myself.

UV: Why don’t more mayors follow your lead and blog?

Mayor Curtis: When we’re in government, we’re almost forced into this stereotypical role. When you get out of that, you get beat up. You put up this façade, this fence. To do what we’ve done, you have to totally let those fears go. You have to be OK with not only a resident’s ability to penetrate the veil, but an invitation to do so. For a politician to say, “I have no secrets,” is really scary. We’ve seen people say, “Hey, let’s do a blog. It’s working in Provo.” But often it’s too refined. By the time it goes through a bunch of kidneys, it lacks interest.

The other part is that people don’t appreciate the commitment it takes. Early on, I would get home from a 12-hour day and have to blog. It’s hard. If I don’t have a daily, good post, I lose viewers. You can’t do this part-way.

UV: How much help do you receive with the blog?

Mayor Curtis: At first, it was all me — every picture and every word. Then my public information officer would be a second set of eyes. For a long time, we would team up to do it. I don’t consider myself a master of the written language, so she would check for errors — if the blog gets criticized, it’s for spelling and grammar, although that’s part of the charm. Now we have more help. But if it’s written in the first-person or personal, it’s either written by me or with my significant involvement and approval. In other words, if it sounds like it’s from me, it’s from me. If it’s announcing an event and sounds less personal, it’s not me.

UV: How does email fit into your digital outreach to Provo?

Mayor Curtis: I spend two hours a day with email because that’s how “Joe” can sit in his living room, send an email to me and get a personal response back from the mayor. How incredibly valuable is that? I feel fortunate because my city is a size that I can answer almost every email that comes to me.

UV: Is your blog part of branding Provo as a tech center?

Mayor Curtis: Perhaps, but let me go one level higher than that. One of the brands I want for Provo City government is accessibility and transparency. That comes before technology. My efforts in social media are really aimed at removing the veil to government. First and foremost, your government should be accessible to you. To most of the government world, transparency means access to records. For me, transparency is about showing the personal side of government.

A weighty issue: Poll reveals what locals think about their weight Next post