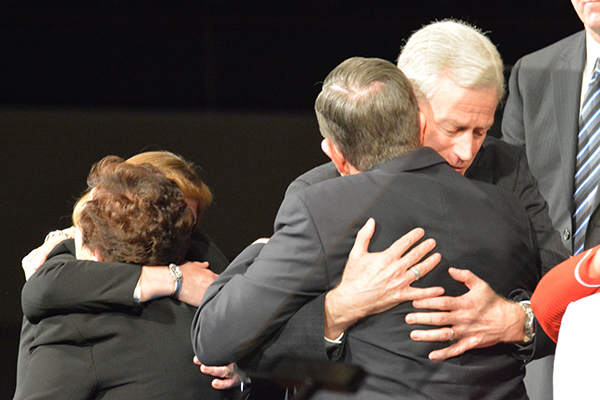 PROVO — An unusual thing happened at the conclusion of the BYU devotional Tuesday — a standing ovation.

The typically reverent Marriott Center filled with applause in honor of BYU President Cecil O. Samuelson, because minutes before President Henry B. Eyring, LDS First Counselor in the First Presidency, announced that as of May 1, 2014, Samuelson will be released.

When Samuelson was chosen as BYU’s 12th president in 2003, he told BYU Magazine in an interview, “I continue to get great vicarious thrills from the success and achievements of outstanding people whom I’ve had the opportunity to intersect with in one way or the other. That’s one of the things that is most attractive to me and exciting about this opportunity at BYU.”

A little over a decade later, Samuelson has had a chance to work with these outstanding people and created a legacy of his own. 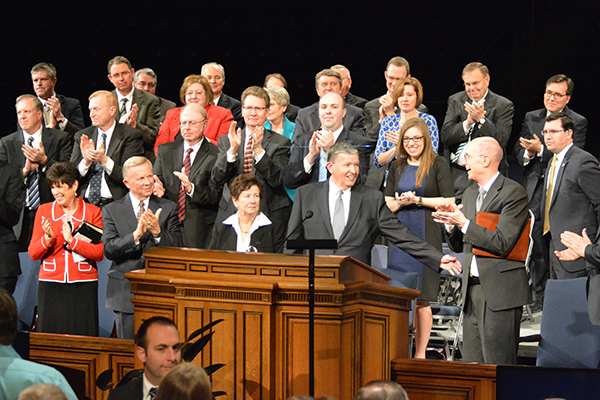 With his bachelor of science degree, master’s degree in educational psychology and a medical degree, all from the University of Utah, Samuelson worked as the senior vice president of Intermountain Health Care.

Samuelson fulfilled all his BYU presidential duties while serving in the LDS Quorum of the Seventy until receiving General Authority Emeritus status in October 2011.

With his wife Sharon G. Samuelson, who is known as an avid BYU sports fan, they have five children and 14 grandchildren.

Samuelson was known as one of the most personal and open presidents of BYU. Since 2004, the student section at basketball games has chanted “Whoosh Cecil” after a BYU player makes a free throw; after the chant, the students then point to Samuelson who answers with a thumbs up. When Samuelson wasn’t able to make basketball games, someone (such as his wife or another administrator) was assigned to address the student section with a thumbs up.

This is a tradition that Worthen hopes continues and students will remember Samuelson by.

“That really was an organic thing from the students,” Worthen said. “I’ll leave it up to them. For my own thinking, I just assume they’ll come up with something else. I think it’s a way of remembering President Samuelson.”

In 2012, Samuelson showed he wasn’t afraid to get in front of a camera to promote the school in a fun fashion. In 2012 Samuelson participated in the “BYU Basketball Real Cougar Commercial” where he is seen “talking” to a cougar.

During his time at BYU, Samuelson has overseen major changes to the school in academics, athletics and construction.

In 2009, the Academic Vice President’s Office oversaw colleges transitioning and combining including dissolving the College of Health and Human Performance and separating into the Marriott School of Management, College of Life Sciences and College of Fine Art and Communications.

Athletically, BYU’s top sports changed completely after hiring the big three in 2005: Tom Holmoe as athletic director, Bronco Mendenhall as head football coach and Dave Rose as head basketball coach. Then in 2010 BYU football declared their independence, which started in 2011, and signed an 8-year deal with ESPN and a 6-game deal with Notre Dame.

Construction projects were spread across the BYU campus with the Gordon B. Hinckley Alumni and Visitors Center (2007), BYU Broadcasting Building (Aug. 2011), Life Sciences Building (to be completed in Fall 2014) and the tearing down of Deseret Towers and Heritage Halls to replace them with New Heritage Housing (8 of the 12 buildings are now completed).

A look to the past for a glance at the future

Samuelson never planned on coming to BYU, but he didn’t take long to catch on to the vision. In the September/October 2005 of Utah Valley Magazine, Samuelson shared in a interview what the BYU vision meant.

” …The vision of BYU has been set for a long time. My job is to see what we can accomplish now and what needs to be accomplished in the next phase. You don’t see BYU doing zigs and zags that other schools do.

It’s very clear we have a good sense about who we are. It’s fun to be along for the ride. I hope I stay a few more years. I wasn’t planning on coming to BYU, and I found myself here in short order. And that will be the way I’ll leave. Transitions here are smooth. They don’t spend time with search committees. … BYU is unlike any other place.”

Samuelson has now stayed for a few more years and has contributed to this vision. This 8-year-old interview answer shows how Samuelson has faith that Worthen will continue the vision, too.

Nap out of it: What to do when naptime ends Previous post