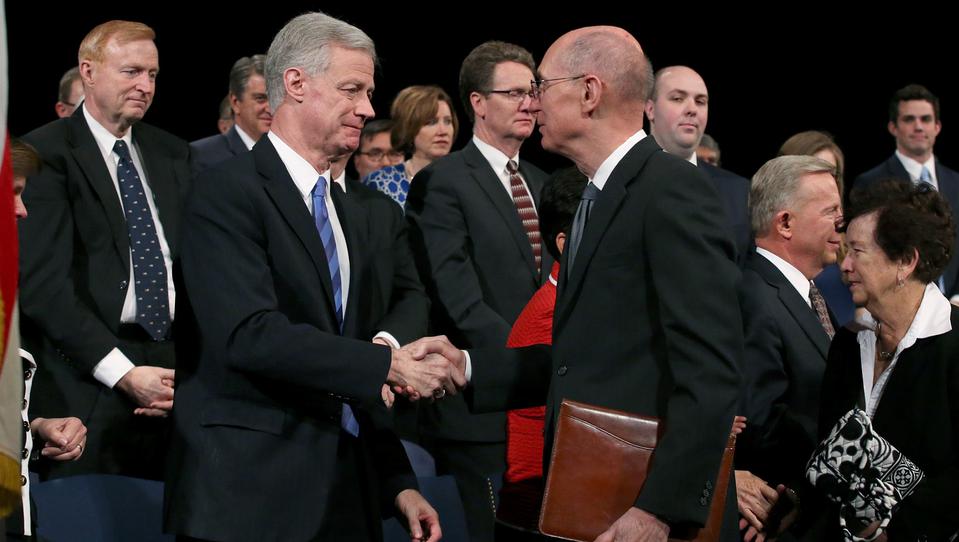 Future BYU president Kevin J Worthen shakes hands with President Henry B. Eyring, First Counselor in the First Presidency of The Church of Jesus Christ of Latter-day Saints, after Worthen was named the new BYU president. (Photo by LDS Church)

Kevin J Worthen J.D., former dean of the J Reuben Clark Law School and current advancement vice president of BYU, will replace Samuelson as the 13th president of BYU. The announcement was made in a morning devotional at BYU by Henry B. Eyring of the First Presidency of The Church of Jesus Christ of Latter-day Saints.

“I am honored and humbled at this opportunity to serve in the university. It’s a place I love,” Worthen said in a press conference following the announcement. “I don’t consider myself measuring up to those who preceded me in this, but I take comfort in the fact that this decision was made by those who I have great confidence in.”

Worthen, 57, said he doesn’t anticipate any major changes, but noted that “nobody is given this assignment to maintain the status quo.” 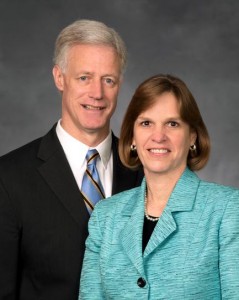 Students responded to the announcement with a standing ovation for Samuelson’s service. Online, students, sports fans and alumni questioned what will happen to the famous homage to Samuelson,  “whoosh, Cecil”—a cheer touted by Cougar fans when a free throw is made at BYU basketball games.

Several tweeters suggested that changing the cheer to “whoosh, Kevin” or “whoosh, Worthen” wouldn’t have the same appeal. Worthen mentioned he had been thinking about the fate of the “whoosh, Cecil” cheer for the six weeks he has known about his assignment, and he agrees. While he likes the tradition, he said it ought to be associated with Samuelson.

“That really was an organic thing from the students. I’ll leave it up to them,” he said. “My theory is that 10 years from now, after my successor, it will be ‘whoosh, somebody else’ and will have lost the special connection it had with President Samuelson.”

BYU students know Worthen, who currently oversees athletics and BYUtv, from conducting weekly devotionals and also for a comedic music video he made two weeks ago with Samuelson and BYU Athletic Director Tom Holmoe. The video, made to promote a basketball game, shows the austere administrators lip syncing to Tom Jones’ “It’s Not Unusual.”

While Samuelson came from the University of Utah, Worthen described himself in the press conference as a BYU man “through and through.”

Worthen said he is proud to say he comes from a city that “doesn’t exist anymore” — Dragerton, Utah, which is now East Carbon City. He earned an associate degree from the College of Eastern Utah where he played varsity basketball. He also worked as an underground coal miner in the Plateau Mine in Wattis, Utah, according to a press release.

He earned his bachelor’s and juris doctorate degrees from BYU. The former Fullbright scholar served an LDS mission in Mexico and specializes in Indian law.

Worthen currently serves as an Area Seventy for the LDS Church. He and his wife, Peggy Sealey Worthen, have three children and one grandchild. Peggy Sealey Worthen said in the press briefing that she is happy to be there for her husband in his new role.

“Growing up a non-LDS person in Utah, I don’t think she thought she would be in this position,” Kevin J Worthen said.