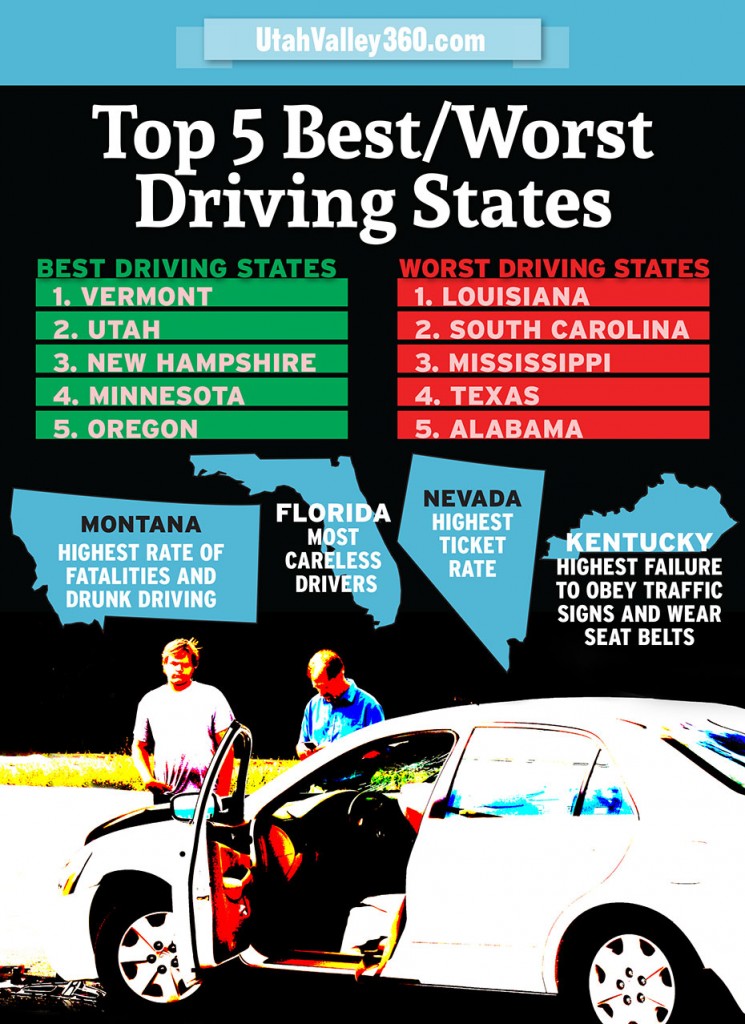 Amanda Lind, who moved to Lehi six months ago from Montana, says Utah drivers are the craziest she’s ever seen. “If you’re not going 20 above the speed limit, you’re not going fast enough for them,” she said. “Sorry, everyone. I’d like to get myself and my kids home alive.”

But according to an article from TIME, Utahans are far from the bottom of the barrel. In fact, they’re the second best drivers in the nation. The article references CarInsuranceComparison.com’s findings, which pooled data from the National Highway Traffic Safety Administration, the National Motorists Association and Mothers Against Drunk Driving. States were ranked based on criteria like fatality rates, drunk driving, tickets, careless driving and failure to obey traffic signs and wearing seat belts.

They concluded the worst drivers, which apparently hail from Louisiana and other southern states, are nowhere near our lovely Deseret.

But many Utah transplants remain convinced that Utah is home to an uncommon number of bad drivers. How can this be? Well, it all depends on your definition of “bad.” Often, when critics say “bad” they mean inconsiderate rather than incompetent or dangerous. When asked which of the two she meant, Lind replied, “Absolutely 100 percent inconsiderate.”

“Utah drivers are rude,” said Talyn Wong, who lived in Utah from 2002 to 2010. “They refuse to participate in zipper action. They do their best not to let you in when you signal a lane change. I once had to drive several miles out of my way because I missed my exit. Three cars in a row purposefully blocked me from the right lane whether I sped up or slowed down. I’ve been cut off trying to enter parking garages multiple times during General Conference of all things.”

But according to police officer Lt. David Caron, who has worked in Springville since he moved from central California in the ’80s, all the talk about which drivers are the best and worst is really just talk.

“The anti-Utah-driver sentiment seems to be based mostly on confirmation bias on the part of people who want to be validated for their preconceived notions about the inferiority of Utah culture in general,” he said.

Maybe Utah drivers deliberately won’t drive well. Or maybe their bad reputation has unfairly spiraled out of control. Either way, it’s clear they have an image problem. When asked if she meant incompetent or inconsiderate, California transplant Tawnee Walker couldn’t make up her mind.

“Inconsiderate,” she said. “No, incompetent. The incompetent thing about them is that they truly believe they’re good drivers.”

Maybe a little humility is a good place to start.