12 life-changing bills you missed at the Utah State Legislature 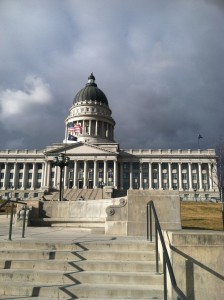 The Utah State Legislature proposed a record number of bills this year — over 738.

Every year, your Utah state senator and representative gather with all other Utah lawmakers for 45 intense days of debating, politicizing and lawmaking. Last week, gavels pounded in the State Capitol building, ringing the end of the 2014 session. Think politics is a snoozer? Well, maybe. But here are some laws that passed (and others that didn’t) that you may have missed. We’ve put together a list of shiny new laws that just might impact you directly.

Utah Valley University was a big winner in the game of allocating Utah’s money when lawmakers passed SB3, a law that will give $50 million to open-enrollment state schools like UVU. Designed to make newer, growing schools more equal to longer-established schools like the University of Utah, the $50 million will be split among UVU, SLCC, Dixie State, Weber State and regional campuses of others.

Utah Valley’s own Sen. John Valentine, R-Orem, told reporters he was glad open-enrollment state schools like UVU got funding, because past funding to the school has been unequal to other state schools. UVU President Matthew Holland told The Salt Lake Tribune that Utah Valley taxpayers carry “a disproportionate share of the burden of higher education.” Read the Trib’s article about it here.

What it means for UV: UVU gets more funding. If you’re a UVU student, you may have more access to resources like counseling or more faculty, for example.

2. Public schools win some, lose some

Public schools got $168 million, meaning spending per student increased 2.5 percent. Read the Deseret News article, here. Utah lawmakers spoke of education as their highest priority, but House Speaker Becky Lockhart, R-Provo, took a hit when her $200 million proposal to put technology in the hands of every student in the state was denied.  Read The Trib article, here.

What it means for UV: A little more money in schools for your kids (2.5 percent increase per child).

A law was passed that may help at-risk children in Utah receive high quality preschool education and possibly avoid special education. HB96 created an innovative funding mechanism in which private investors fund high quality preschool curriculums for at-risk kids in hopes they can side step special education, which costs the state an extra $2,600 per student per year. The program means some families may be able to qualify for a great preschool education for their children who are performing under state standards. United Way of Salt Lake supported the passage of the bill and called the program a win-win for the state and for children. Read more, here.

What it means for UV: If you have a child who is projected to need special education, this program may help him or her steer clear of special ed or might help pay for it.

The controversial school grading program was tweaked. The original program gives grades to schools based on year-end testing and graduation rates. The new program is less harsh, ending the practice of giving schools an automatic F grade if they fail to test at least 95 percent of students, according to The Salt Lake Tribune.

What it means for UV: Schools in Happy Valley will have an easier go in their year-end testing, and their “grades” will better represent students’ success, as per request of Utah teachers. 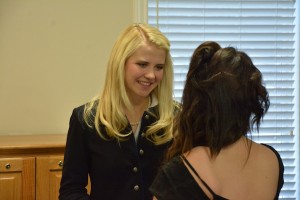 Elizabeth Smart talks to a student in the “This Girl” program at Heritage School. Smart supported legislation this session that teaches children in school about sexual abuse. (Photo by Rebecca Lane)

Public figures like Elizabeth Smart and Deondra Brown (from 5 Browns) teamed up to support HB286, legislation that requires schools to teach children about sexual abuse, in hopes kids will be more equipped to resist or run away from a perpetrator. Parents can opt their child out of the program if they wish, but this was still a tough decision for some lawmakers and lobbyists who worried about parent’s rights. The curriculum ultimately passed and will be implemented starting in the 2016-2017 school year. Read more here.

What it means for UV: Your kids will learn what’s appropriate for adults to do and what’s not and may feel like they have options, as Elizabeth Smart said in a hearing. If you’re worried about it, you can opt your kids out.

What it means for UV: If you’re struggling with infertility, you may be able to work it out with your insurer or employer to cover the treatments, which can have a pretty hefty price tag if you pay out of pocket. Or ask your insurance company to transfer the $4,000 mandated for adoption coverage toward infertility treatments.

Just a few days after Utahns turned clocks forward for daylight saving time, tired lawmakers moved to create a one-time meeting to study the impacts of the time change. The public is invited to testify so if “fall backward” and “spring forward” have you snoozing in the middle of the day, this might be your chance to speak up. Here is more on the study from The Tribune.

What it means for UV: This doesn’t get rid of the time change, but it will give the public a chance to share their feelings on daylight saving time. 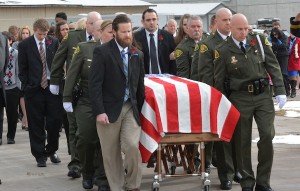 The pallbearers carry Utah County Sgt. Cory Wride’s casket out of the UCCU Center after the funeral service. Utah legislators honored Wride during the 2014 legislative session. (Photo by Rebecca Lane)

After a St. George couple was walking and struck by a car in an accident caused by texting, lawmakers passed a law that tightens laws against cell phone use while driving. Before, the law only specified texting as illegal, but now specifies that all activities — except for using GPS navigation and talking on the phone — are banned. That means dialing, emails, games and the like are out of the question. Some lawmakers opposed the new law because it begs the question whether other distractions are allowed. Others saw it as a lifesaving measure. Read more about the story behind the law here.

What it means for UV: No more Instagramming, Candycrushing or Tweeting while driving — even checking UtahValley360.com! Want to talk on the phone? Use your voice-command technology or pull over to dial. It could save a life! 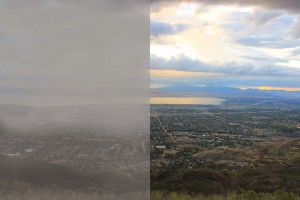 These combined photos compare the air quality in Provo. Lawmakers decided to transition half of the government vehicles to greener vehicles by 2018. (Photo by Brian Nye)

Utah County may be over the hill from the Capitol, but we valley dwellers certainly get our fair share of the inversion. Some progress was made for air quality improvement in the legislature this year, yet many would argue there’s still a long way to go.  Lawmakers made the decision to transition half of state vehicles to greener vehicles by 2018, allowed for more electric-vehicle charging stations, and also mandated a state tax credit of $2,500 for those who want to purchase electric vehicles or update their current car. One bill that failed would have raised sales tax by a quarter of a cent in order to fund more bus routes and rail lines. Lawmakers also killed a proposition to allow Utah to have stricter air quality standards than the federal government. Read more from KUER and Deseret News.

What it means for UV: Bluer skies may be ahead, and not just because spring is coming. If you want to buy an electric vehicle or upgrade your current car to be a little more eco-friendly, you may qualify for a $2,500 tax credit. Also, stricter wood-burning laws and more opportunities to charge your electric vehicle are coming.

Lawmakers struck a deal with the grassroots movement Count My Vote, who originally wanted to eliminate the state’s caucus system. Under the new compromise signed by the governor, candidates can bypass the caucus and convention system and win nomination by gathering enough signatures (the number is proportionate to the district population) and go directly to the primary ballot. Candidates also still have the option to use the party convention system by winning support of delegates. The system will go into effect next year.  Get more background here.

What it means for UV: You can vote for someone who gathered support from people like you through signatures, sans delegates. Love the caucus system? No problem! That’s still available, too.

Last but certainly not least, the Utah House published a 214-page report on former Attorney General Swallow, who allegedly had a “pay-for-play” relationship with friend Jeremy Johnson for whom he would perform favors, according to The Salt Lake Tribune. After spending four months and $4 million on the investigation, the House says Swallow hung a veritable “for-sale” sign on the door of the attorney general’s office. And hey! Utah even made the New York Times for it.

What it means for UV: As Provo’s own Rep. Becky Lockhart, R-Provo, put it, “we cannot put a price on trust.” It also means lawmakers have made it so elections to any office will be a little more transparent from now on.

Other new laws it wouldn’t hurt to learn about: