Home LDS Being LDS How do you get on the 100 coolest women list?

How do you get on the 100 coolest women list? 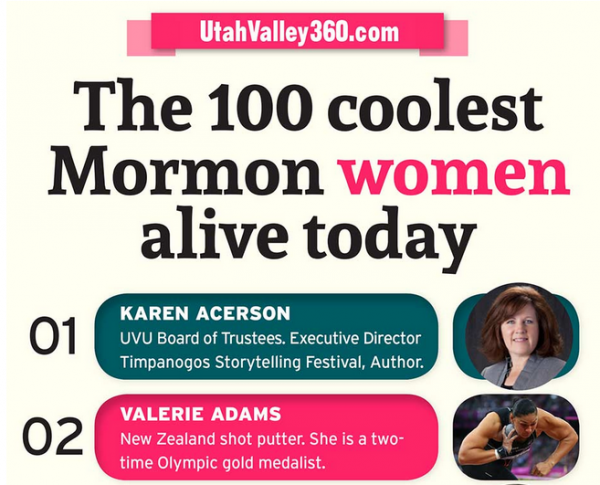 The following post by Elizabeth Stitt originally appeared on lizstitt.blogspot.com in response to an infograph on Utahvalley360.com in January 2014. It is shared here with her permission.

How do people get to be so awesome?

Recently I read an article about the 100 coolest Mormon women alive today. As I read through the list of their accomplishments, I was struck with the thought, “How on earth do I become like one of those women?” And I started thinking of more and more awesome women and what they do. Women who write books that sell like hotcakes. Women who write blogs that have a million page views (I mean, mine is nearing 10,000 and that’s a pretty big deal for me). Women who start their own businesses or teach at important universities or play an instrument like a boss or don’t just know politics but articulate their thoughts without sounding like a goon (why do I get so tongue-tied?). Or, you know, are skeleton racers in the Olympics. Cool, right?

Sure, I can try and blame my normalcy on my “youth”. Not so fast. Annie Henrie, a wonderful artist (one of my most favorite paintings is hers) — she’s my age. We were in the Sterling Scholar program together (not the same category of course, just on the same printed program, but still). Lindsey Stirling. I helped mentor her during her freshman year at BYU. Kelsey Nixon? We were friends in high school. OK, I’ll have to stop name-dropping here, because I actually know A LOT of really cool people and I don’t want to leave anyone out. (Oh, and Annie wasn’t actually on the “list” but even so, I think she should have been and examples in threes work better, so…there).

So I may be wrong, but I don’t think it’s necessarily a feeling of jealousy or envy. Rather a (hopefully) righteous feeling of wanting to be influential.

Don’t we all feel that way at times? And I’m not just talking about popular. I’m talking about people who are actually doing things that make the world a better place. There are a lot of women who are popular but who aren’t really out there to build people up or lead people to Christ. So, yeah, popular is not the key performance indicator here. Nor is making a point or having followers a key performance indicator.

But making a difference for good? In the important things of life? Yeah, that’s what I like. Don’t you ever feel that you just want to “bless the whole human race”? Sometimes I just think, “Today I may have helped one person with something I did or said. What if I could help 100 people? Or 1,000? What if I could let God’s love be felt for more than just one person but many people at the same time!?”
[pullquote]Where do you get on the train that leads to awesomeness? How do you get to be one of those people?[/pullquote]

It makes you wonder, right? Like, where do you get on the train that leads to awesomeness? How do you get to be one of those people? It makes it even harder when we’ve been counseled to seek for opportunities to share our talents and our light. I don’t think it’s a vain ambition. But, how do you do it?

Well, it starts with one. And you know what? Really, one is all that may ever matter.

A few weeks ago, I decided to pay attention to this and started writing it down. Because there were a lot of “ones” who needed help. A gal who broke up with her boyfriend and needed to talk. And then later needed resume help for a job application. Actually, several gals who broke up with boyfriends (I swear, late January to February is break-up central time. Even I was on that bandwagon!) Oh yeah, and several friends who needed job search coaching. A friend who got appendicitis and needed a visit while in the ER. A friend who I go to the gym with regularly so she can get in better shape to go on a mission.

A friend whose boyfriend didn’t plan anything or even acknowledge Valentine’s Day and she needed some understanding. A friend whose aunt passed away somewhat unexpectedly. A friend who felt like she was drowning in her troubles and needed some serious help…and a 7-11 Slurpee. A new friend — a teenage girl — who is now under my care as a mentor. A friend who got into a bad car accident the same week she was set apart as Relief Society president. A friend who is serving for the third time as a Relief Society president (at my same age!) and needed some encouragement. There were just a lot of friends to comfort and help and console and cheer up and love. And these were only a small portion of the needs in a one to two week time span! And these completely exclude the needs of family and even strangers. The needs continue and, in fact, never stop.

Now I don’t mean to suggest that those 100 coolest women don’t attend to those kind of needs. I know they do.

Now I know we are not striving for personal honor and glory, but instead for God’s glory. Remember “Let your light so shine before men, that they may see your good works, and glorify your Father which is in heaven” (Matthew 5:16, emphasis added). So when I start to feel like I’m just never going to be as cool as someone on that list, I need to remember that doesn’t matter. God never asked for us to be on the 100 coolest women list. He never asked for us to win accolades. Does he want us to do our best? Yes. And be our best? Yes. Does He love it when our influence is widespread and our light shines to more people? Surely. Does he think those 100 women are pretty cool? Of course He does. Does He think we are just as wonderful? Without a doubt.

But what if our contribution seems small as a struggling college student or as a young mother or as one who has deep emotional or physical burdens to bear in this life? It just doesn’t matter as long as we reach out to the one. One child. One neighbor. One friend.

I still want to be an influence for good on a much broader level. And I still plan to continue to reach for and accomplish my goals in that regard.

But the most influential person to ever walk the face of this earth, the Savior Jesus Christ, showed by example that “one by one” is what matters (3 Nephi 17:21). He left the ninety and nine to go after the one (Luke 15:4). One by one, He blessed the children. One by one, He healed and forgave and loved and ministered.

He taught, “Remember the worth of souls is great in the sight of God” (Doctrine and Covenants 18:10).

The worth of every soul.

The worth of just one soul.

So, how do we become awesome?

The Bright Track: Furniture expert takes a walk on the light side Next post