I may have been the last woman to attend Priesthood Session 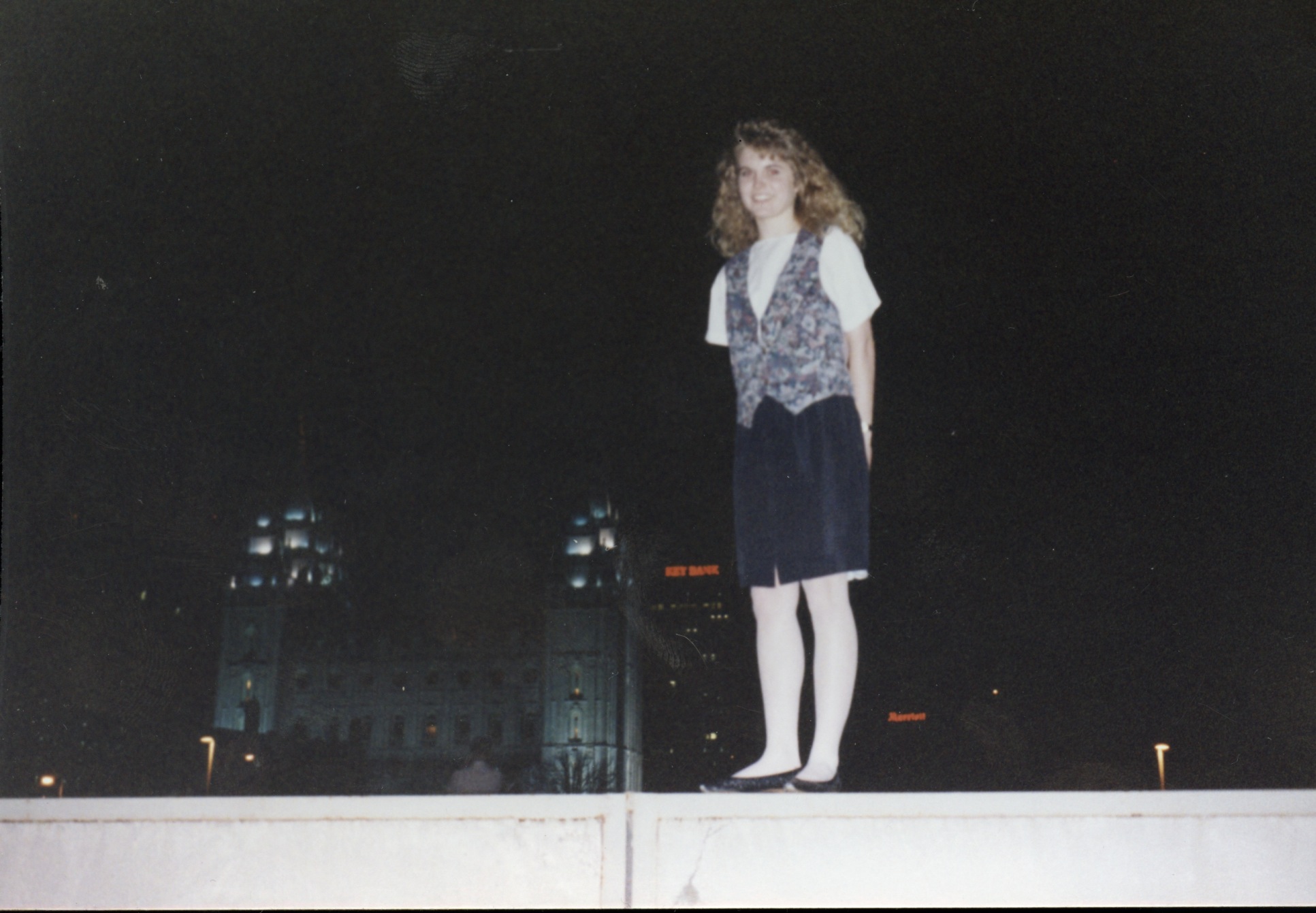 On April 3, 1993, Jeanette (Waite) Bennett attended the Priesthood Session of LDS General Conference as a reporter.

I may have been the last woman to attend Priesthood Session.

It was Spring 1993, and I was an editor at The Scroll, which was the student newspaper at Ricks College (now BYU-Idaho). Prior to each semi-annual General Conference, the LDS Church sent packets to news outlets with instructions for acquiring press credentials to cover the five-session, one-weekend event.

Always up for an adventure, I immediately liked the idea of making the four-hour trek to have a seat in the Tabernacle’s press section, which was on the southwest corner of the balcony directly overlooking the junior members of the Quorum of the Twelve Apostles.

Because I was quasi-dating a member of the Men’s Choir at Ricks, I knew our junior college was providing the music at the Priesthood Session. And I also knew our student singers were a primary storyline and photo opp for The Scroll coming out of General Conference. As I looked at the press credential packet, I looked at my group of all-female reporters and sighed.

I hadn’t yet heard of the Internet, email or cell phones. So I did what any level-headed journalist did back in 1993. I picked up the corded phone and called Church headquarters. I explained that I was filling out the paperwork for press credentials, and I would like to check the box that said I would be attending all five sessions, including Priesthood. Would that be OK?

The man on the other end asked if I had a male reporter who could go to that session instead. I truthfully told him my group of reporters was 100 percent women, and then we shared a light-hearted moment about the male/female ratio at Ricks. I told him our newsroom reflected that percentage, and the male staffers we did have were concentrated in the sales and photography departments.

The man said he would check on my request. When he returned my call, he said he had good news. I had been approved to attend the Saturday evening session, and he encouraged me to dress conservatively so I didn’t draw attention to myself. I wasn’t sure if he said that “officially” or somewhat facetiously, but I took him literally.

And I wasn’t offended. I truly did not want to draw attention to myself. What I did want to do was cover Priesthood session and the Ricks College Men’s Chorus as a writer representing my student body of 8,000ish.

When I walked onto Temple Square just after 5 on Saturday evening, my conservative attire didn’t do enough to help me fit in. True, I wore the black-and-white uniform, but my blonde hair and white-nylon legs were unlike any other guest lining up outside the Tabernacle doors. And let me emphasize I did feel like a guest — I had been invited to this event, and I didn’t take that lightly nor did I want to limit my invitations in the future.

The entire night, I was the recipient of smiles and pampering from the ushers and other journalists. Multiple times I was asked if I needed anything. Nearly everyone who I made eye contact with asked who I was and how I managed to be the only female in the room. I felt curious eyes from the balcony and the main floor staring my direction.

A radio reporter shuffled down the pew and landed next to me just as the session was about to start. He said everyone was looking at me, including the camera operators, and he was sure I would be on TV. He wanted his own moment of fame, and he figured his best chance was sitting beside this female reporter, 20 years his junior. (His strategy backfired as we never appeared on the monitors.)

As the session began, I watched my friends and classmates sing “See the Mighty Angel Flying” and “Sweet Hour of Prayer.” I heard more laughter than I had during the daytime sessions — especially during President Hinckley’s remarks. I listened to the all-male speakers instruct the nearly 3,000 attendees, who looked like my balding father and my sometimes-absent home teachers and the new Deacons whose short pants reveal white gym socks.  It seemed as if the men, both young and old, were bonding in their challenges, imperfections and goals as Priesthood holders. At one point, President Hinckley asked the Deacons, Teachers and Priests — and then former Deacons, Teachers and Priests — to stand. I was the only one still seated on the pew.

I was impressed with the strength I felt in the room, and selfishly I wanted those men to listen closely and come away refreshed and instructed so they could fulfill their important roles as my bishop, my uncles, my monthly high council speakers and my son’s future Scoutmasters.

Afterward I left the session uneventfully, and I returned to the Tabernacle the next day and sat on the wooden bench in a mixed audience for two more sessions before the 240-mile drive back to Rexburg in my Ford Escort. 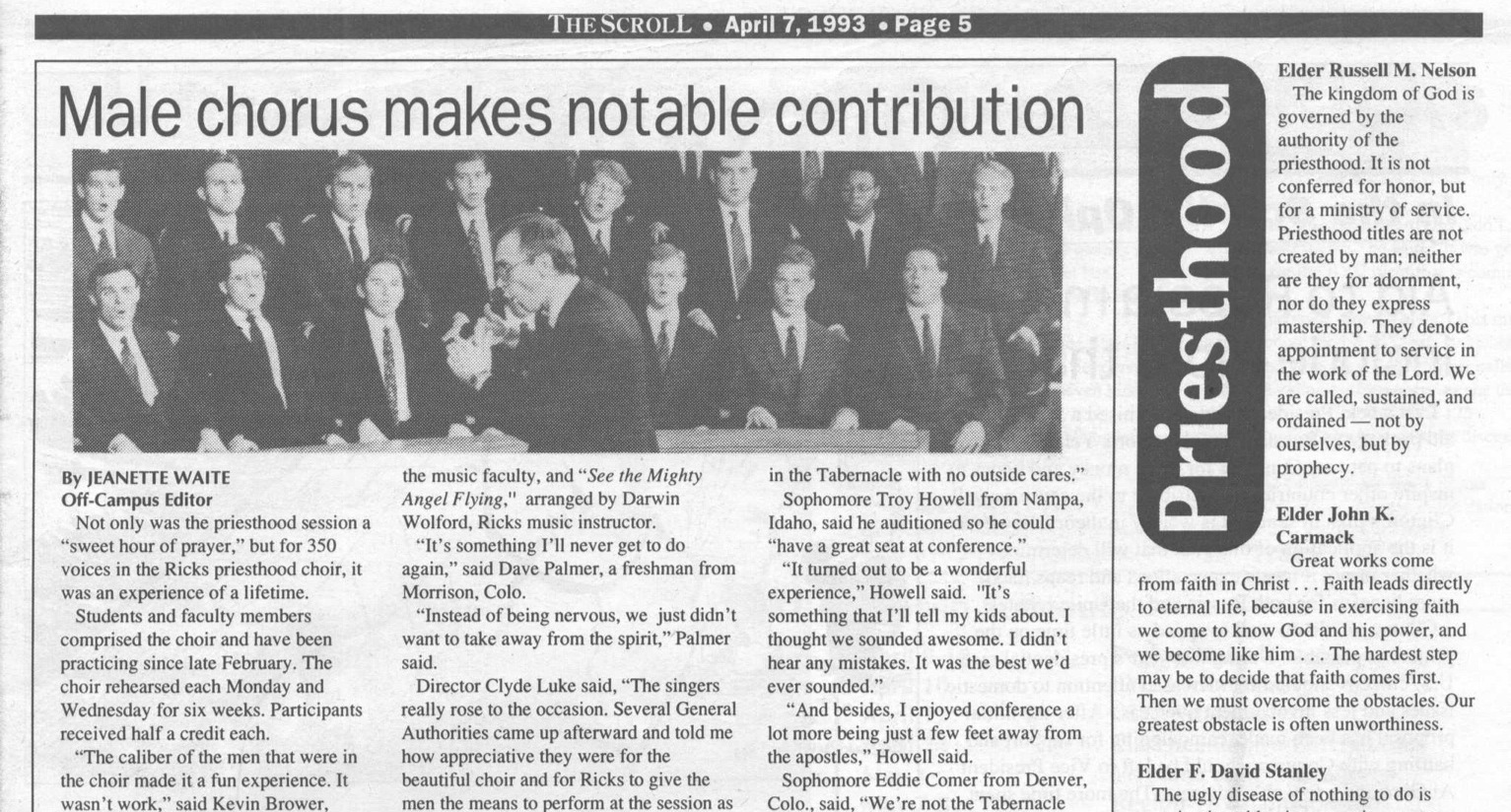 Jeanette Bennett (who went by Jeanette Waite at the time) led an all-female group of writers at The Scroll, which was the student newspaper at Ricks College (now BYU-Idaho). She attended Priesthood session in the Tabernacle and wrote about the Ricks College Men’s Choir, which performed in the April 1993 session.

Early Monday, I was in the newsroom typing up my notes in preparation for my Tuesday deadline. I heard the phone ring for the first time that morning, and our office manager announced that President Steven Bennion was on the line. My heart started pounding. Why would our college president start his week by calling the newsroom?

He asked if I had been to Utah this past weekend to cover General Conference.

Had I been at Priesthood Session?

President Bennion then said he got a call from one of the brethren that morning who saw a woman at the Priesthood session. He wanted to know who she was and tracked me down through Church Public Affairs. President Bennion relayed that the caller wondered about my purpose and felt that having me there was a distraction.

In Fall 1993, we received the General Conference media packet at our college newsroom. I snatched it, hoping for another trip out of windy Rexburg. As I scanned, I noticed a new sentence of instruction that indicated only male reporters were invited to cover Priesthood session.

My first thought was, “I am responsible for a new church policy!”

My second thought was, “I don’t blame them.”

As much as I enjoyed the content of the Priesthood Session and the palpable strength in the sea of suits, I had garnered far more attention than the brothers by my side — and perhaps more than some of the speakers. I couldn’t deny that my attendance had been somewhat uncomfortable for me and clearly confusing to some men in the Tabernacle.

Back in the press box

Two years after my Priesthood appearance, I was in the press area again — this time for BYU’s student newspaper — when President Hinckley was sustained as the 15th president of The Church of Jesus Christ of Latter-day Saints in April 1995. During the Solemn Assembly, groups were asked to stand, sustain the prophet and be seated. The First Presidency stood to sustain him. Then the Quorum of the Twelve Apostles. Then the Quorums of Seventy, followed by patriarchs, high priests and elders. After that, the Aaronic Priesthood holders were asked to stand and sustain President Hinckley. Then it was the Relief Society sisters’ turn to hold their arms to the square, followed by the young women ages 12 to 18. Finally, the entire congregation stood together to sustain Gordon Bitner Hinckley as prophet, seer and revelator.

We stood symbolically and separately as men and then as women before uniting together to sustain God’s mouthpiece on earth. Gender is clearly an essential and defining characteristic in the way we worship. We are stronger and deeper as a worldwide church — and in our local congregations — when our individual genders stand tall. 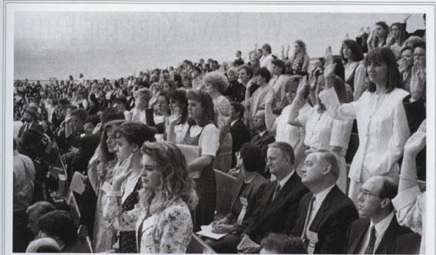 Jeanette Bennett (curly hair, floral dress in front) was photographed standing with the women during the Solemn Assembly to sustain President Gordon B. Hinckley in April 1995. This photo ran in the May 1995 Ensign.

After my two separate weekends in the press box, I understand that keeping the “roses” apart from the “thorns” isn’t about limiting the roses. It is about providing the thorns a successful setting where they can learn to soften their mortal “prickliness” and become the best versions of themselves. Women can and do watch the session on TV and read it online and in the Ensign, so it’s obvious the content isn’t exclusive or secretive. It’s the experience of an all-male session that warrants preservation.

And the same holds true for the “roses.” When women gather at the General Women’s Meeting to wage a war on our spiritual wilting, we want to be surrounded by our sisters who know first-hand the joys and struggles of womanhood. Similarly, we strengthen our sisterhood weekly in our all-female, all-personal Relief Society lessons. Men and women are divinely different — and parts of our instruction need to be, too.

[pullquote]Men and women are divinely different — and parts of our instruction need to be, too.[/pullquote]

As we approach the April 2014 General Conference, discussions are flurrying about a group of women who have requested tickets to attend Priesthood session as a symbol of their desire for greater participation. As one who has been there and done that, I strongly support the Church’s decision to keep the gender meetings separate. In a noisy world of distraction, blurred lines and overstimulation, I celebrate that our prophet-led church chooses to instruct men singularly and directly. And I look forward with joy to the separate women’s meeting where I will learn how to honor my eternal role as a woman, helpmeet and leader.

The LDS Church has made generous strides in elevating opportunities for women and will likely travel further down that path in coming days, but I will continue to support a Priesthood session where men spend two hours away from the gender they are taught to cherish, serve and love. And I’m also a raving fan of women having their own session where the sopranos reign and the doctrinal messages are decidedly feminine and focused.

Truthfully, I need strong Priesthood holders who unite to learn and grow every six months. And I want to be a strong and wise woman who focuses on my own spiritual growth and then harmonizes mine with theirs. Separately and together, men and women can stand tall by bringing faith and works to The Church of Jesus Christ of Latter-day Saints.

Jeanette Bennett (jeanette@uvmag.com) is co-owner of Utah Valley Magazine and UtahValley360.com. She serves in the Young Women organization of The Church of Jesus Christ of Latter-day Saints.