The high price of playing college football for Luke Staley 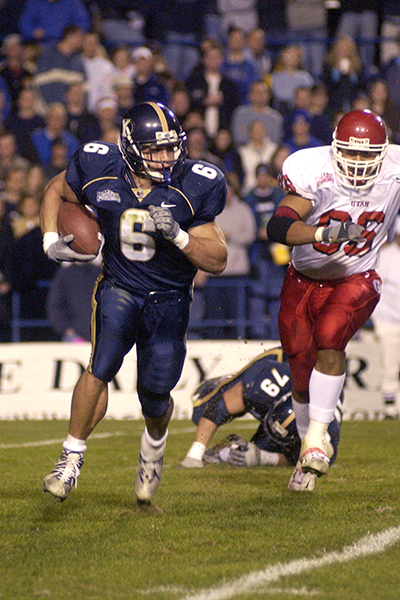 Luke Staley played running back for BYU and was the 2001 Doak Walker Award winner. Staley received a variety of injuries during his time playing football that he is still dealing with today. (Photo by Mark Philbrick/BYU Photo)

Football used to be such a simple sport. The ballcarrier ran the ball into a wall of mammoth defenders; got knocked around, twisted and folded into weird positions, heard strange popping sounds and ringing in his ears — and then he got up and did it all over again.

Football was all about the present, getting the spherical leather ball over the white line in the end zone for a touchdown and working toward a championship. Very little thought was given to the future of the players who sacrificed their bodily and mental health for the quest of winning a title.

But with the recent death of Junior Seau, the memory problems from football injuries by Jim McMahon and the chronic pain, concussions and depression of other former players, player safety and the high price of playing college and professional football comes to the forefront.

Luke Staley, the 2001 Doak Walker Award winner and consensus All-American running back from BYU endured a lengthy history of injuries throughout his playing career. Ankle, foot and knee injuries hindered his playing time and dropped his NFL draft stock to the seventh round, where another knee injury ended his NFL career before it started. The image of Staley accepting the Doak Walker Award on crutches shows the injuries he sustained. Staley will be going in for his 22nd surgery since ending his football career and said the multitude of surgeries come from playing as a college athlete.

“I have bone spurs in my foot and possibly no cartilage in my right knee,” Staley said. “A lot of it is repercussions from the rigors of playing at a high level as a college athlete and just the wear and tear you’re going to have.”

When Staley played 13 years ago, precautions and health evaluations did not exist as they do today. Football programs throughout the country are more cognizant of injury consequences now. College football has instituted a medical professional independent from the team to diagnose potential concussions of any football player who experiences concussion-like symptoms on the field, and he must medically clear them before returning. The NFL has also talked about similar precautions, but Staley said it ultimately falls on the player’s shoulders to understand his own body limits.

While young players in high school, college and professional leagues are motivated by the journey toward a championship, regardless of a little pain, Staley said the players need to have a perspective on what could happen. But even that comes with a caveat, in that football players, while in the heat of the game, have the mindset of doing whatever it takes to win a game.

“As a football player, you have to play with a sort of reckless abandonment and put your body on the line,” Staley said. “When a player is in that setting, going for a championship, he’s looking at his teammates and sees them going through the same thing and will get out there and play, but at that time, the player can’t know what the future can hold.”

Staley, who has the benefit of almost 15 years of hindsight, with countless surgeries and chronic pain, said he would have played differently if he had known the consequences of the game.

“I always say if you had asked me before I played football, I would say I would absolutely play the same way I did,” he said. “If you ask me where I’m at now, I would definitely question that. There’s not a day I don’t hurt getting out of bed. My shoulder’s not right and I hurt going out and playing with my kids. That’s the sad part of it all. When my kids ask me to go play catch with them and I say, ‘No I can’t, because my body hurts too bad.’ So I would definitely have got more opinions on medical issues and injuries, and I would have played differently.”