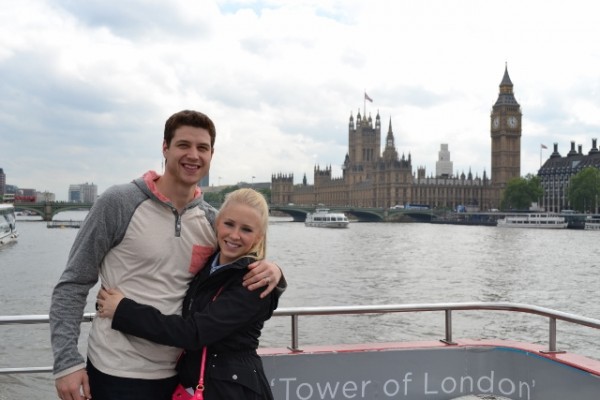 Jimmer and Whitney Fredette’s travels have included London, where they saw Big Ben and the Houses of Parliament (shown in the background).

Jimmer Fredette should have been in a boy band. Never mind that he was the leading scorer in all of NCAA Division I basketball during his senior season at Brigham Young University. Never mind that he earned every major college national player of the year award and was subsequently drafted to the NBA in the first round.

“If Jimmer could do his life all over again, he would want to be in a boy band — still does to this day,” said his wife Whitney. “He knows every lyric to every *NSYNC song and can name every band member, just by hearing his voice. It’s a little over the top!”

Whitney Fredette, 23, recently talked to UtahValley360.com about life as an NBA wife and as Jimmer’s biggest fan. The beautiful, petite former BYU cheerleader married her husband in the Denver Colorado Temple of The Church of Jesus Christ of Latter-day Saints in June 2012.

In an email, Jimmer said his wife is loved by everyone: “She lightens up every room that she walks into and is always the nicest person in the room,” he said. “She has an amazing and sweet spirit about her, and she definitely brings the best out of me! She is the better half of the relationship both in personality and looks!”

A Littleton, Colo., native, Whitney graduated from BYU in broadcast journalism in 2012. The couple recently moved to the Windy City after Jimmer signed with the Chicago Bulls. Below, Whitney talks playoffs, fans and the couple’s favorite places to eat in Utah County.

UV360: How are you liking Chicago?

Whitney: I love Chicago! We are living downtown, right on Michigan Avenue, so I am in heaven. It has always been one of my favorite cities in the U.S., and I have just fallen in love even more over the last few weeks. Nothing like living in a big city! The food and the shopping are top notch!

UV360: What’s it like being married to a New Yorker?

Whitney: Ha ha! That’s a funny question! It’s really great.  He talks a little weird, but I always correct his funky accent and the words he pronounces incorrectly. It is so wonderful though because we get to go back and visit, and New York is incredible. So I absolutely love being married to someone who is from back East.

UV360: What’s the best part about being an NBA wife? The worst?

Whitney: The NBA is a unique experience. The best part about it would be the schedule. Jimmer gets a five-month off-season, and we get to spend every day together during those months. The worst part is also the schedule, because during the season I’m alone a lot, and I get scared pretty easily.  So I have a love-hate relationship with the schedule! It’s also really tough, because being in the spotlight that we are in, a lot of people have their own opinions about my husband. The negative ones are really hard to see and hear. I think Jimmer is the best at everything, so it’s really hard when people put him down or talk negatively about him.

UV360: What are a few things people might not know about you?

Whitney: I am scared to death of bees. I will run, scream, cry.  I hate them so much, and because of that, summer is my least-favorite season. Bees are everywhere during the summer. We love ice cream, more than almost anything else. Every week we go to the store to try a new flavor of Ben & Jerry’s!

UV360: What’s the fan interaction like when you guys visit Utah, compared with other states?

Whitney: Utah will always be a little different than anywhere else. In the cities he has played for, Chicago and Sacramento, the fans have really loved him. It’s hard not to! Whenever he goes and plays in any city he always has a good-size following, just because the LDS Church is worldwide, and a lot of members will attend a game when he is in town. He actually often gets asked by his teammates how he has fans in every city. It turns out to be a good missionary experience! In Utah, it’s totally different. It was really wild in college, because of everything that was going on, but even today people still know who he is, and we can’t go anywhere without being asked for a picture or an autograph. It’s really great to know that fans in Utah still support him and love him as much as they did when he was in college.

UV360: What are your family’s plans for the summer?

Whitney: Well, we had plans to go to Canada in early May, but I’m probably going to have to cancel that trip due to potential NBA playoffs … so I can’t complain!  Other than that we are going to Hawaii with my family, New York to visit his family and for his (Jimmer Jam Basketball) camp , and then Utah for a few weddings and his second camp.

UV360: What are some of your favorite things to do in Utah County?

Whitney: We both have a special place in our heart for Utah County, because we both lived there for four years. Some of our favorite places to eat are Marley’s Gourmet Sliders (at the Riverwoods), Guru’s Cafe and Los Hermanos. We LOVE to eat! We love going back for football games and visiting our friends. We also love to go out on Utah Lake in the summer.

Why happy couples can use marital counseling too Previous post