Lighter side of Elder Oaks shines at Pillar of the Valley 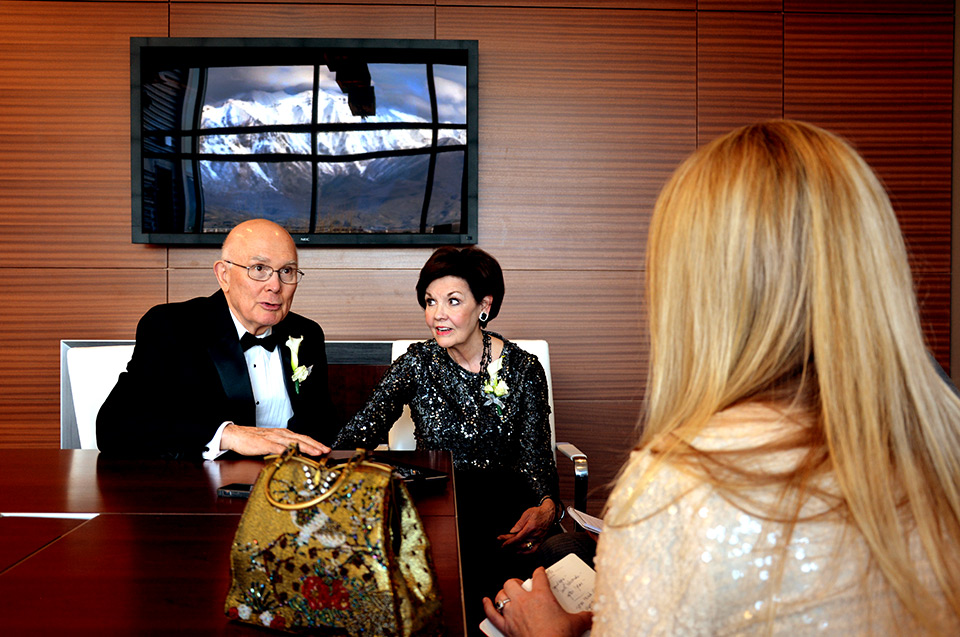 Utah Valley Magazine editor Jeanette Bennett interviews Elder Dallin H. Oaks and his wife Kristen Friday night at the Utah Valley Convention Center in Provo, Utah. Elder Oaks was honored by the Utah Valley Chamber of Commerce as the Pillar of the Valley. 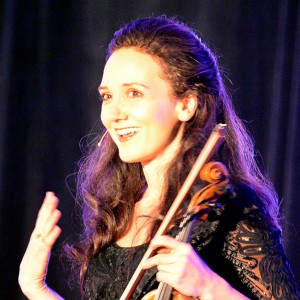 Jenny Oaks Baker performed two violin numbers, one being “I Know That My Redeemer Lives” at the request of her father.

When Elder Dallin H. Oaks learned he would be named Pillar of the Valley by the Utah Valley Chamber of Commerce, an experience with President Gordon B. Hinckley flashed in his mind. The two were traveling together and Elder Oaks entered a room where President Hinckley was taking pills related to his advancing age. Elder Oaks worried that his travel partner may have felt embarrassed that someone was watching him. President Hinckley’s humor surfaced and he blurted out, “I’m a pill-ar of the church!”

“President Hinckley was so clever and so spontaneous, and I’d never heard that pun before!” Elder Oaks said as he pulled out his own red container of vitamins and pills from a pocket during an interview with UtahValley360.com prior to the event on Friday, March 28. “And that story was the first thing I thought of when I learned I would receive this award.”

Elder Oaks’ lighter side was showcased during the 4th annual event with an audience of 650, where he was honored by speakers including his wife Kristen, Elder Russell M. Nelson, Elder Spencer Condie and local attorney Bill Fillmore who was student body president at BYU. Elder Oaks’ nine-year service as head Cougar, which began when he was 38, was lauded throughout the night. 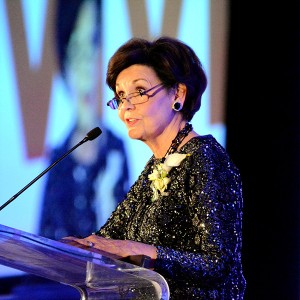 Kristen Oaks named two important qualities of her husband: “Constancy and wisdom … I’m thankful to be part of the women who have helped him.”

During Elder Oaks’ remarks to receive the award, he related that after he left the president’s office at BYU, he served on the Utah Supreme Court. His late wife, June, said to him at the time, “Every time you’ve taken a new job since you graduated from law school, it has meant a cut in pay.”

Nearly four years later he was called to full-time, lifetime service in the LDS Church where he was given a living allowance.

Later President Hinckley asked the general authorities to step away from paid opportunities on corporate boards, which meant “it happened again,” Elder Oaks relayed to his adoring crowd.

Utah County turned out in record numbers for this event to honor one of its own. Elder Oaks also claims Utah County and said it represents the bookends of his life. He was born in west Provo nearly 82 years ago, and he intends to be buried in Provo. He told UtahValley360.com that serving as BYU president was one of the most significant periods of his life. During his tenure he brought other big names to campus, including Rex Lee, Merrill Bateman and Jeffrey Holland, all of whom became BYU presidents. Elder Oaks was also responsible for hiring LaVell Edwards as head football coach. 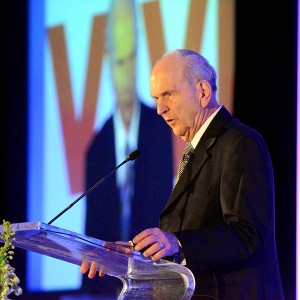 Elder Russell M. Nelson, who was called as a member of the Quorum of the Twelve Apostles the same day as Elder Oaks on April 7, 1984, embraced Elder Oaks following his remarks.

“A lot of people in the world think (hiring LaVell Edwards) was the most important thing I’ve ever done,” Elder Oaks quipped. “And maybe it was.”

World renowned violinist Jenny Oaks Baker, who was born while her dad was serving as BYU president, performed two numbers including her father’s request of “I Know That My Redeemer Lives.” After receiving a standing ovation she said, “Dad paid for a lot of music lessons.” She also related that her father would often leave his office door open to hear her practice.

Elder Oaks was surrounded by family at the four-course meal and in the VIP reception beforehand. He acknowledged the joy and significance of the evening, but he also lightheartedly told the media prior to the event that the secrets to becoming a pillar in the valley include longevity, not trying to become the pillar, being around long enough that your friends are the ones influencing the decision of who will receive the award, and having a beautiful wife who is very photogenic.

Truthfully, women have always been strong influences in Elder Oaks’ life, starting with his mother who was the first woman elected to the Provo City Council and also served as acting mayor. 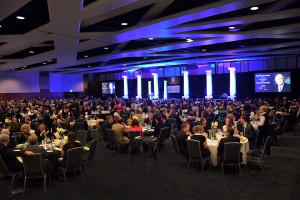 About 650 people attended the Pillar of the Valley event Friday night at the Utah Valley Convention Center.

“My mother was an incorrigible optimist, notwithstanding being a widow for 39 1/2 years,” Elder Oaks said. When Stella Oaks died in 1980, Elder Oaks and his siblings chose this phrase for her headstone: “Her faith strengthened all.” Elder Oaks said that he would like that to be said of him as well.

To that end, Elder Oaks will be speaking in the Priesthood session of General Conference on Saturday, April 5. “I look on that as a great opportunity to speak to men who hold the priesthood and to women who are very interested in what is taught there,” he told UtahValley360.com.

Elder Oaks recalled the decision just before General Conference in October 2013 to broadcast the Priesthood session live. “I remember that decision being made at almost the last minute. This time around, there is foreknowledge that the broadcast will be available.” 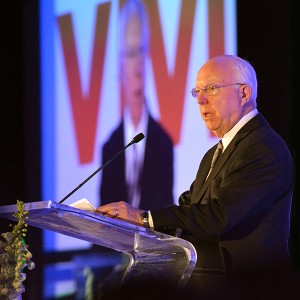 Elder Spencer J. Condie, an emeritus general authority, knew Elder Oaks as they worked together at BYU and then again at church headquarters. Elder Condie humorously talked the audience through the courtship of Elder Oaks and his second wife, Kristen. He also said that Elder Oaks and his first wife, June, gave the most powerful sermon they could give by having a baby while serving as BYU president.

Elder Oaks said he will gather with his sons and sons-in-law to view the General Women’s Meeting on television. “We don’t want our wives to get all of the benefit,” he said. His daughters, granddaughters and great-granddaughters will view the significant women’s meeting together as the women of the Church unite in a historic way.

The overall health of the LDS Church is largely influenced by Utah County, Elder Oaks said, specifically because BYU and the MTC are in its borders. He also said the “extraordinary faith of the members” in Utah County stands out.

“The concentration of faithful Latter-day Saints is extraordinary,” he said. “The proportion of people in Utah County who are LDS is unique in the state, which makes it much harder for them to do missionary work here. But the young men and young women who go out from Utah County go to all parts of the world, and that’s the missionary function along with the MTC.”

Elder Oaks recalls the discussions in the early 1970s at church headquarters about whether to put the MTC in Provo or Salt Lake City. “The resources of BYU to provide returned missionaries who spoke different languages who could be teachers — and the facilities of BYU that could provide the physical functions of maintaining the buildings — turned the decision clearly to Provo. The Provo Temple, which was dedicated in the winter of 1972, was another important consideration.” 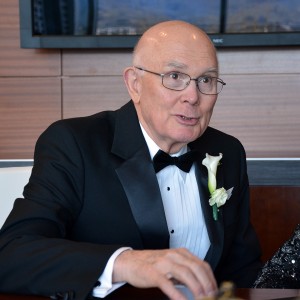 In his interview, Elder Oaks shared a message to the young residents of Utah County: “Be conscious of your heritage. You are growing up in a world that has been formed by the decisions and sacrifices of your predecessors. Don’t take your direction from people who just speak of the present. Look at what has gone before, what has formed the prosperity and the integrity and the goals and accomplishments of this community and this nation and all of its institutions. Build on that. Improve it as necessary. But don’t try to invent a new culture or a new set of values. Build on what has gone before.”

Elder Oaks displayed his uncanny memory for timelines and names — and his graciousness — while wearing a tux at this black-tie event. As he stepped to the microphone to accept the award, he described a letter of praise he wrote decades ago to Harold B. Lee before the two were acquainted. Lee’s response included the sentiment of, “I am not deserving of your praise, but I’ll take it as a challenge.” Elder Oaks echoed that message — “I take your kind words and honor as a challenge to be deserving of them.”

A photo of Elder Oaks was unveiled as part of the Pillar of the Valley display on the third floor of the Utah Valley Convention Center.

Ray Noorda was also honored posthumously as a Pillar of the Valley for his significant contributions to Novell and the explosion of the technology industry in Utah County.

Quotables and Notables on Elder Oaks

• Elder Jeffrey R. Holland said on the video tribute that Elder Oaks is “so humble we want to spank him.”

• Elder Russell M. Nelson said in his remarks that Elder Oaks is “more than a pillar of the valley. He’s a humble genius.” The two were called as apostles on the same day 30 years ago. Together they traveled to Armenia. “With my arm around him, and his arm around me, he gave a dedicatory prayer to open the country to missionary work,” Elder Nelson said.

• Grandson Hyrum Oaks (organizer of Utah Valley Marathon) said his grandpa made a career as a judge “but is the least judgmental person I know.” 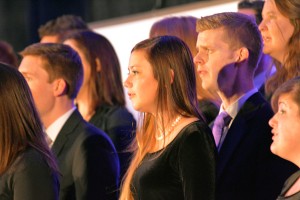 The Orem Institute Choir sang a stirring “Climb Every Mountain,” which event organizers learned was one of Elder Oaks’ favorite songs.

• Attorney Bill Fillmore, who served as BYU student body president under Elder Oaks, described him as having a backbone of steel.