Home Sports BYU Music at BYU athletics strive for popular, upbeat, and most of all, clean

Music at BYU athletics strive for popular, upbeat, and most of all, clean 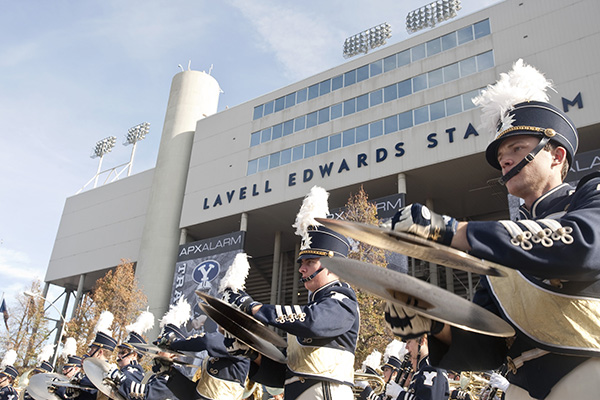 During breaks at football and basketball games, the music is split between the BYU marching band and prearranged popular songs over the loudspeaker. (Photo courtesy BYU Photo)

BYU athletics are rocking out in style.

Given the higher standards at BYU, the music selection for athletic events can get a little sparse. But the songs played throughout games at the Marriott Center and LaVell Edwards Stadium are still pumping up fans with upbeat music that is trendy, catchy and clean.

The first thing the BYU Athletics Marketing Department looks at when selecting game music is the family-friendly environment the events are supposed to create, according to BYU Marketing Assistant Bryce Lake.

“The process for selecting music is different at BYU, because we obviously have certain standards we have to uphold,” Lake said. “We need to make sure it’s comfortable for a family-friendly environment.”

The marketing department assigns a different person to oversee the music for each different sport. The assigned person chooses music that is popular and excitable but most of all that is appropriate for the standards of The Church of Jesus Christ of Latter-day Saints. While there are no written guidelines for the person to follow, Lake said the idea that families with young children attend games as a family activity and general authorities of the church are likely to attend games creates a standard by which to judge.

“We have apostles and other church dignitaries who come to many of our games,” Lake said. “My personal standard for selecting music is if I would feel comfortable playing this music around them.”

The university has a licensing contract to use most music throughout events at BYU venues and can purchase the rights to any other song not included in the original contract, Lake said.

“We have songs for home runs and other songs for when we intercept the football and take it back for a touchdown,” Lake said. “There is different music for each quarter breaks or media timeouts. And then there’s coordinating with the BYU band and splitting the time with them.”

The marketing assistants have the responsibility to edit out any profanity and sexual innuendos in the lyrics.

Even with the agreement on making the music family-friendly, every person has a different sense of what is appropriate or not. Lake said the university receives an average of two or three complaints per year on the music selection from fans as well as students, and the department tries to take them into consideration.

Even though the stricter standards are in place at BYU athletics, limiting some of the music choices, the BYU sports atmospheres still turn out to be some of the toughest places to play and the songs effectively pump up the fans.

With the basketball season recently ended, the marketing department has started work on updating the music for the 2014 football season.