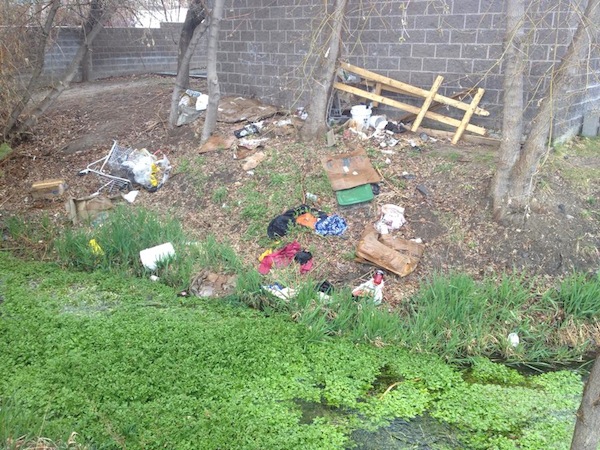 Trash is strewn around the site of a historic saw and grist mill in Provo. A Provo group is organizing a cleanup for the area on Saturday, April 12. (Photo courtesy Provo Municipal Council)

It was the site of saw and grist mills built in 1855, but now it’s mostly known as the area between Taco Bell and L&L Barbecue on Bulldog Boulevard in Provo. The original grinding stone serves as a historic marker for the site — placed by the Daughters of Utah Pioneers in 1954, and a stream still runs through the property.

But now it’s also a dumping ground for trash.

After photos of the dumping ground appeared online, a Provo Facebook group called Our Provo organized a cleanup project for Saturday, April 12, starting at 10 a.m. The city will have a Dumpster on the site and a tree-pruning crew to help out, according to the city council’s blog.

The project will include cleaning up garbage, dredging the stream, weeding and tree trimming.

Volunteers are asked to bring waders, hip boots and rubber gloves so they can get in the stream and pull out trash. Other needed items: shovels, rakes, picks, 5-gallon buckets, clippers, trimmers, saws, wheelbarrows and tall ladders.

Volunteers are asked to park behind the strip mall where L&L barbecue is located.

The first logs were sawed at the mill on July 13, 1855, according to the Utah Division of State History. In the late 1850s the Mills family built a grist mill at the site. They diverted water from the Provo River for power. They first ground corn in December 1861, and first refined flour at the mill in 1862.