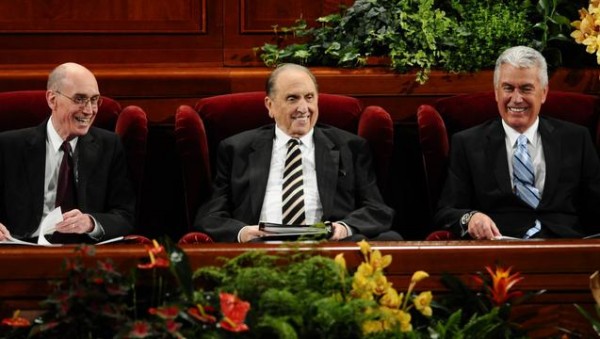 The First Presidency and Quorum of the Twelve Apostles are sustained every six months as “prophets, seers and revelators.” (Photo courtesy Mormon Newsroom)

Members of The Church of Jesus Christ of Latter-day Saints sustain their leaders as “prophets, seers and revelators.” Does that mean these men in the First Presidency and Quorum of 12 Apostles foretell future events?

In recent years these modern-day prophets have clearly been “forthtelling,” which involves teaching doctrine, witnessing of the Savior and warning against sin. In some instances, this forthtelling happens just ahead of a major world event or paradigm shift.

Here are five examples of modern-day prophets having the gift of foresight. 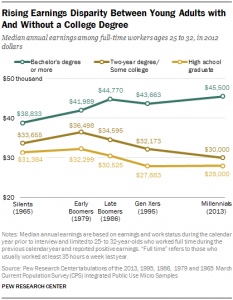 Recent research supports what President Hinckley knew — Millennials with a college education are at a distinct advantage in the workplace. (Image from Pew Research Center)

When then-Church president Gordon B. Hinckley gave counsel to youth in 2000, he was speaking to the generation that would come to be known as “Millennials.” In that address, he taught the youth to, among other things, be smart.

“You are moving into the most competitive age the world has ever known,” he said. “All around you is competition. You need all the education you can get. Sacrifice a car; sacrifice anything that is needed to be sacrificed to qualify yourselves to do the work of the world. That world will in large measure pay you what it thinks you are worth, and your worth will increase as you gain education and proficiency in your chosen field.”

At the time, it seemed like good advice. But research from the Pew Research Center shows just how prophetic that advice was. In its study “The Rising Cost of Not Going to College,” the institute reported that Millennials with a college education have a distinct advantage in the workplace, both in probability of finding a job and in earning potential.

In October 2012, President Thomas S. Monson announced that the minimum age requirement for missionary service was to be lowered. It came as a surprise to Church members everywhere, but General Conference addresses had been pleading for more and better-prepared missionaries for some time. In some cases, Church authorities outright stated that prospective elders couldn’t wait until they were nearly 19 to prepare for full-time service.

“Please understand this: the bar that is the standard for missionary service is being raised,” Elder M. Russell Ballard said in a 2002 general conference address. “The day of the ‘repent and go’ missionary is over. You know what I’m talking about, don’t you, my young brothers? Some young men have the mistaken idea that they can be involved in sinful behavior and then repent when they’re 18 1/2 so they can go on their mission at 19. While it is true that you can repent of sins, you may or you may not qualify to serve. It is far better to keep yourselves clean and pure and valiant.”

President Gordon B. Hinckley, then president of the Church, read “The Family: A Proclamation to the World” at the General Relief Society Meeting Sept. 23, 1995. The document outlined the importance and purpose of the family and enumerated specific duties of fathers and mothers. The document also states in its opening line that “marriage between a man and a woman is ordained of God.”

It wasn’t until 2008 that that definition of marriage came into question, when the battle of California’s Proposition 8 brought the Church’s stance into the headlines. The proposed state constitutional amendment maintained that marriage remain between a man and a woman. The Church took an active role in lobbying for the amendment, which passed, but was overturned in 2010 by United States District Court Judge Vaughn Walker. More court rulings, and finally rulings from the Supreme Court, redefined marriage to include homosexual couples in the years that followed.

President Gordon B. Hinckley’s 1998 counsel to Church members to “avoid debt to the extent possible” came just ahead of the global financial crisis of 2008.

“I urge you to be modest in your expenditures; discipline yourselves in your purchases to avoid debt to the extent possible,” he taught. “Pay off debt as quickly as you can, and free yourselves from bondage.

“This is a part of the temporal gospel in which we believe. May the Lord bless you, my beloved brethren, to set your houses in order. If you have paid your debts, if you have a reserve, even though it be small, then should storms howl about your head, you will have shelter for your wives and children and peace in your hearts. That’s all I have to say about it, but I wish to say it with all the emphasis of which I am capable.”

5. Weakening of the family unit

When President Joseph F. Smith counseled Church members to strengthen their families in 1915, it was a logical sentiment. But since the traditional family unit was strong worldwide, the idea of strengthening families wasn’t seen as a revolutionary idea.

Nearly 100 years later, the world has seen a dramatic shift away from the traditional family unit. Church members who hold weekly Family Home Evening as President Smith suggested and strengthen their families in other ways enjoy the benefits of a stronger family in a world where that bonding experience is no longer to be taken for granted.