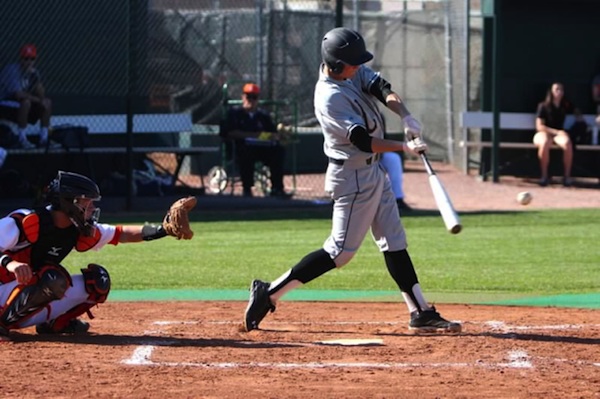 Lone Peak’s Grant Lyman leads the state in hitting through eight games with a .619 average. (Photo by Dave Boyd)

Lone Peak’s Grant Lyman has two strikes against him.

Strike one: He’s on fire. And by fire, I mean if he goes 2-for-4, his batting average will go down.

Strike two: He’s batting fourth — the cleanup spot — usually reserved for the team’s best hitter, the guy who is expected to not only hit but also to hit with power and drive in runs.

When you put the barrel of the bat on the ball with regularity and when you hit in the cleanup spot, you can be assured of one thing — you will see a lot of bad pitches. In other words, pitchers only throw Lyman a strike out of necessity or by accident. But bad pitches or not, nothing seems to bother Lyman.

Through Lone Peak’s first eight games, Lyman leads the state in hitting with a .619 average. He has four doubles and a triple and a home run.

“He’s strong and he has very good tendencies. He also reads the pitcher very well. When he’s on I think he’s the best third baseman in the state,” said Lone Peak coach Matt Bezzant. “He hits the ball hard. He’s more of a line drive singles and doubles hitter but has the power to hit home runs as well.”

Another category Lyman is likely to be a leader in is prompting the most mound visits by opposing coaches.

Coach: Well, be careful with this guy. He’s been killing it. I don’t want him to beat us.

Coach: See if you can get him to swing at something outside the zone. Whatever you do, don’t give him something good to hit.

Lyman, a 6-2, 185-pound senior, started last year as a junior and hit around close to .465 with five home runs. His success has already led to other opportunities. He plans to accept a preferred walk-on spot with BYU but that will come after he graduates from Lone Peak and serves a church mission.

When he returns from his mission he will try to make an impact on BYU’s baseball program, but for now Lyman has been focused on helping Lone Peak get off to a fast start. This year the Knights are 7-2. They have won seven in a row and are on top of Region 4 with a 4-0 record. It’s quite a turnaround from last season when the Knights finished 5-10 in region play (11-12 overall) and missed the playoffs.

Lyman has also given the team a lift on the mound. His 2-0 record and 1.50 ERA makes him one of the team’s top pitchers.

In a way, pitching has helped Lyman become a better hitter.

“When I’m pitching I’m thinking that I’m not going to give their first four hitters anything in their wheelhouse, so I imagine other pitchers are thinking the same thing about our team,” Lyman said “By the third game of a series, I’ve noticed that I haven’t gotten good pitches to hit so I’ve been forced to make some adjustments.”

Lyman shared some other tips.

Lyman will likely cool off. Hitting over .600 for a season is unrealistic, but his goals aren’t based on numbers. They are based on helping the team make a run at the state tournament. If Lone Peak hopes to contend, Lyman will have to continue to have a big senior season.

Lyman is just one of several Utah Valley players who have been hard to get out this season. Deciding who is off to a fast start and who can sustain this pace for the season is the challenge when ranking the top 10 hitters in Utah Valley.

With that in mind here are my top 10 hitter rankings.

2. Trevor Perkins (Spanish Fork) Sr.: There are many great hitters on this team but Perkins has earned himself into the top five by becoming the team’s hottest hitter. He’s batting .556 and already has 16 RBIs.

3. Hunter Christensen (Lone Peak) Sr.: He already has four home runs in eight games and is the last guy I would want to face right now. He’s batting .429 with 3 doubles and 9 RBIs.

5. Emmett Green (American Fork): Green goes with the pitch and is comfortable hitting to all fields. The lefty hitter is proving to be nearly impossible to keep off base. He has a .667 on-base percentage and is hitting .550 with two triples.

7. Kaden Paulsen (Maple Mountain) Soph.: Other hitters in my rankings have better numbers right now but I believe by the end of the season he will be among the top hitters in the state. He’s currently hitting .375 with four doubles, a triple and eight RBIs through the first 12 games.

8. Chandler Goeckeritz (Lone Peak) Jr.: Goeckeritz is one of this year’s biggest surprises. He recently ended a string of 14 straight hits. He has 3 doubles, a triple and 2 home runs.

10. Gunnar Gustin (Salem Hills) Sr.: The move-in from Idaho is hitting .462 with six doubles in his first year with the Skyhawks.