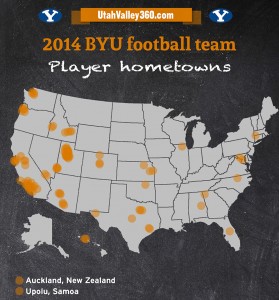 Passionate BYU football fans have certain perceptions about where players are recruited from.

Some are correct. Some are not.

Test your knowledge of the current BYU roster by answering the following questions.

1. From which state does BYU get more football players?
A. Utah
B. California
(Correct answer is “A.” Some 47 players came from Utah. California is second with 34 players on the roster.)

4. How many BYU players are from outside the United States?
A. 1
B. 2
C. 3
D. 4
(Correct answer is “B.” Paul Lasike is from Auckland, New Zealand and Kalolo Utu is from Upolu, Samoa.

6. Which, of the following states, has the most players on the 2014 roster:
A. Colorado
B. Arizona
C. Idaho
D. Nevada
(Correct answer is “B and C.” Idaho and Arizona each have six players on the current roster. Colorado has three and Nevada has two.)

7. How many BYU football players are from Hawai’i?
A. 2
B. 4
C. 6
D. 8
(Correct answer is “A.” Only two players are from the Aloha state and one is a haole. Michael Alisa and Graham Rowley.

Sneak Peek at 'Heaven is for Real': 10 images of heaven according to Colton Burpo Next post