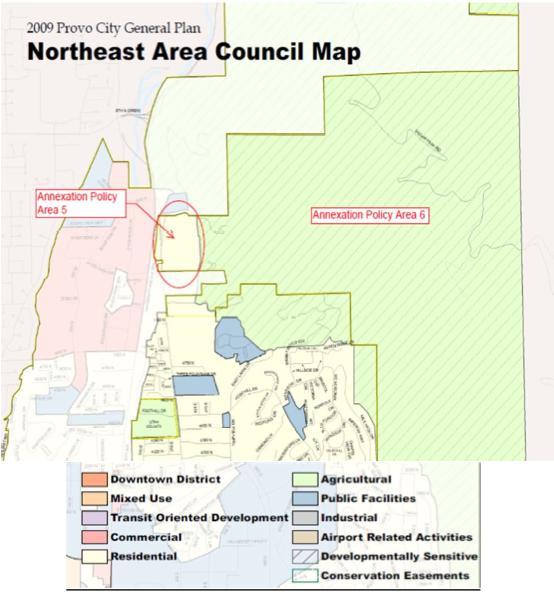 The map shows proposed northeast Provo annexation. The plan as proposed would create an island of unincorporated property owned by the Gillespie family.

A group of property owners didn’t get the answer they wanted from the Provo city council this week — the city can’t annex their property, at least not the way they proposed.

The property owners in the area — called the Smith-Northern Hills annexation, at approximately 210 acres between 5000 and 5500 North and east of Canyon Road — petitioned the city to annex. The unincorporated area is mostly farmland now, but if the land were annexed, at some point owners would likely sell to developers. There’s no development plan in place.

One problem with the annexation petition was that one piece of property was not part of the proposal, owned by the Gillespie family, and would become an island of unincorporated land if the annexation went through — something not allowed by state law. Another issue was that the owners don’t have an annexation agreement for the city, which would lay out the responsibilities of a developer on the land and protect the city from having to install or repair costly infrastructure.

“My concern is we’re obligating the city to bring services in an area where we can’t reach them,” said Councilman Gary Winterton. “It’s such a rough topography I’m not sure how we can make things financially work. And since we don’t have an annexation agreement to deal with I feel I’m not ready.”

Sandy Davidson said she’s been working on this project since 1994, and only recently got all the owners to agree to annexation. She said the owners don’t want to sign an annexation agreement with the city because that’s something that should be done with developers in the future. They’d be willing to sign a disclosure that says the developer would be responsible for infrastructure, but city council attorney Brian Jones said the annexation agreement has to be done at annexation — it can’t be done later.

“I’m sorry, they’re farmers. They’re going to continue to farm it until someone makes them an offer,” Davidson said of not wanting an annexation agreement. “When it’s an agreement it needs to be with a developer.”

Provo Public Works Director David Decker agreed that the city needs an annexation agreement because they’re talking about millions of dollars worth of infrastructure. In most developments, the developer isn’t required to build water tanks and booster pump stations.

“It is our recommendation that an annexation agreement spell that out,” he said. “We’re trying to word it such that it would only be a requirement upon the property as development occurs.”

So after about an hour of discussion, the council opted to continue the matter to give the property owners up to six months to work with the city council’s staff on a solution.

Hometowns of 2014 BYU football players (Quiz and Infographic) Next post