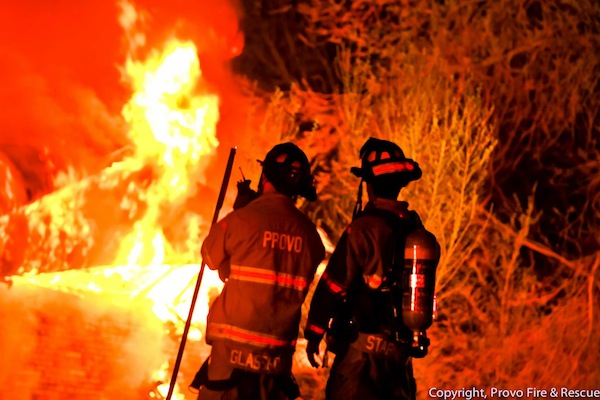 Since March 13, firefighters have doused three separate blazes at abandoned duplexes in north Provo, a fire at a house on East 700 North and now three more fires in west Provo. They say all seven fires were intentionally set, though they don’t know if they were all started by the same person.

All the homes were boarded up. In the majority of fires, the arsonist pulled boards off and started the blaze from the inside. The fires set on March 24 were started from the outside, and one of the fires on Tuesday — the debris pile — started outside.

Dogs trained in fire investigation have been helping gather evidence, and in each fire have alerted to an accelerant being used. Fire officials gathered that evidence from the scene and are waiting for results.

Also, with seven arson fires in a little more than a month, Provo is setting up a task force led by the police department to investigate the blazes. The Provo Fire Department also is working with the Bureau of Alcohol, Tobacco, Firearms and Explosives.

The city’s police will be doing extra patrols to watch for the suspect arsonist, it has set up a tip line for the case — (801) 852-7400 — and more dispatchers will be on duty to handle calls. There’s also a $5,000 reward for information that leads to a conviction in the case. 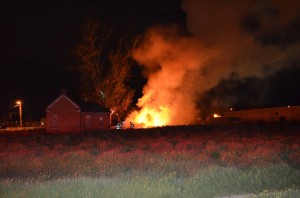 City officials are asking people to pay extra attention to vacant, abandoned or dilapidated properties, especially between 1 and 5 a.m. The city has identified five boarded up buildings in the city, and is getting help from neighborhood chairs to make a list of vacant properties.

“Typically when these get solved someone saw something and reported it,” Schofield said.

The city doesn’t have a firm damage estimate because the buildings were all abandoned, but Prov

The 4800 North duplexes have been abandoned and boarded up for several years. According to Curtis’s blog, a developer bought the property several years ago and planned to build a new development. But then the economy tanked and he lost the property to several banks. Now the owner of the majority of the buildings has agreed to have them torn down, after getting a demolition permit from the city, having the asbestos removed and hiring a contractor. The city’s also working to get the other buildings torn down.

Curtis said that owners of all the damaged or destroyed properties have agreed to demolish the buildings.

Anyone with information about the fires should call investigators at (801) 852-7400.