The FAIR Mormon blog is a Mormon apologetics site that takes on relevant topics. (Photo from blog.fairmormon.org)

Mormons are a social bunch. Ward parties, stake dances and informal social gatherings have been a staple in LDS culture for decades. And when people took their social lives to the Internet, members of The Church of Jesus Christ of Latter-day Saints joined the party.

In a 2012 survey, 35 percent of of blog-writing mothers in the United States were located in Utah — more than any other state. But it’s not just stay-at-home moms who make up the Bloggernacle. The Church encourages members to blog about their beliefs — Elder M. Russell Ballard has specifically asked members to join in the effort. And Church members are listening.

The Internet is a valuable missionary tool. LDS blogs are relevant to Church members as well. Here are five LDS blogs you don’t want to miss.

Rebbie Groesbeck, founder of Normons.com, said she heard that phrase so often that she and a co-worker coined a new term for Groesbeck and other “normal Mormons” — Normans.

Later, Groesbeck and seven other Normans came together to create Normons.com, a site they say is run by “just a handful of Mormons trying to prove how freaking normal we are.” The eight Normons write about LDS culture, answer questions they receive from people not familiar with the Church and post articles about famous Mormons.

“… [P]eople are still confused by the Mormon folk,” Groesbeck writes on the website. “Are they weird? Are they cool? The answer is YES. We’re kind of weird. But we’re cool with it.” 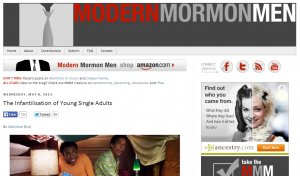 The Hebrew word “Segullah” — pronounced “SAY-goo-law” — indicates a precious, set apart, diligently cared for personal possession. The mission of the LDS blog (and literary journal of the same name) is to “encourage literary and artistic talent, provoke thought and promote greater understanding and faith among Latter-day Saint women.”

Unlike a personal blog, Segullah draws on the talent of a wide range of women. The organization has also produced two books: “The Mother in Me” and “Dance with Them: 30 Stumbling Mothers Share Glimpses of Grace.”

FairMormon (the nonprofit organization) existed long before the blogosphere, but this LDS apologetic site is a welcome resource on the Internet. A lot of online information about the Church is inaccurate, faith-diminishing and sometimes even hateful toward the Church. FairMormon is an organization “dedicated to providing well-documented answers to criticisms of LDS doctrine, belief and practice.”

In short, it’s a safe place on the Internet to explore questions about everything from polygamy to homosexuality to racial issues in the Church. Many of the authors on the website are authors of apologetic publications who have been involved in Internet-based conversations about the Church for years. If you have a question about the Church that you want to explore in a non-threatening (dare we say, “fair”?) environment, this is the site for you.

If the image that comes to mind when you hear the word “blogger” is of a 20-something stay-at-home mom, Modern Mormon Men will change that. The site was founded when its creators noted the conspicuous absence of male voices in the LDS blogosphere. The men (and women) behind Modern Mormon Men explore the LDS experience from several vantage points, discussing relevant issues, sharing the words of prophets and exploring the Mormon experience.

Contributors to the blog are asked to maintain a “neutral to positive” tone when writing about the Church. The site has produced some popular posts, most notably “The Infantilisation of Young Single Adults.”

5. Mormon Women: Who We Are

This blog (which is owned by The More Good Foundation) is another place where posts from a wide variety of women are aggregated into one place. The site is missionary-minded, though the topics in posts are enjoyable for members of the Church as well.

“Our mission here at Mormon Women: Who We Are is to share personal experiences and perspectives about being members of The Church of Jesus Christ of Latter-day Saints,” the site reads. But beyond that, it’s difficult to generalize what posts are about. The blog covers everything from raising children to temple worship to battling depression to frequently asked questions about the Church — all topics relevant to Mormons and their friends.

Dwell Done: Tana Hallows builds Destination Nursery from the ground up Next post