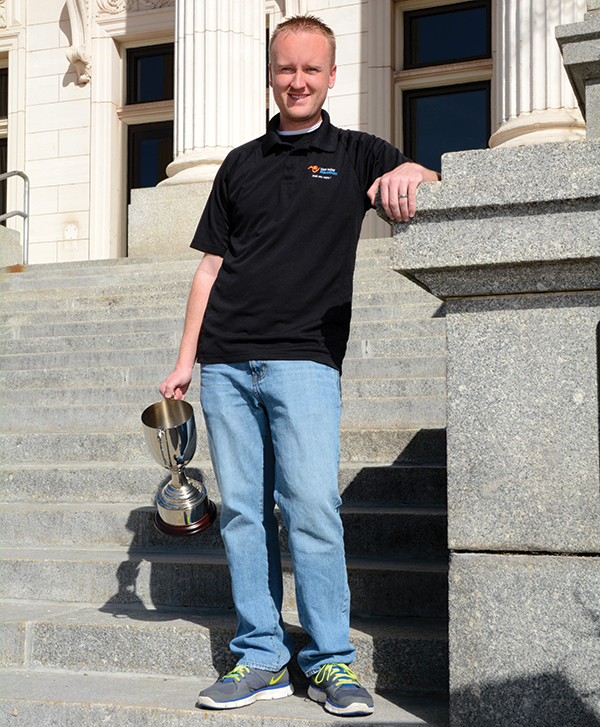 Hyrum ran his first marathon at 17 and now plans 26-milers for a living. In addition to the Utah Valley Marathon, Hyrum has also organized races in Phoenix.

There are two kinds of people in the world, those who think running a marathon sounds like torture and those who think it sounds fun. Utah County is full of the latter — just start counting Ragnar bumper stickers on I-15.

To meet the demand of our pavement-pounding culture, dozens of half-marathons are lined up on summer Saturdays. But in years past, those who wanted to run a full marathon had to travel to Salt Lake  City or St. George — until Hyrum Oaks created the Utah Valley Marathon in 2008.

It all began when Hyrum and his friend Jeremiah were talking about how they wished they could sleep in their own bed the night before a marathon. Hyrum had some experience planning events and with some encouragement from Jeremiah, Hyrum decided to start his own marathon. When he got local sponsors like The Daily Herald involved, the race got its legs.

The race has grown from 240 participants to more than 7,000 runners.

Organizing a race involves a complicated web of permits, Powerade and porta potties. Hyrum estimates that each year he manages 1,000 volunteers, hydrates runners with 80,000 paper cups and uses 120 buses to transport runners to the starting line. Immediately after the race, Hyrum starts collecting feedback and planning next year’s race.

With a 1,700-foot elevation drop (holy quads!) and a scenic route that starts in Wallsburg and ends in downtown Provo, the race quickly became a local favorite. It gained national recognition when Runner’s World magazine named it one the top 10 marathons in the country in 2014.

One of the race’s unique features is the personal record bell.

“In other sports when you score a point or make a goal, the whole crowd cheers,” Hyrum says. “In running, when you run a race in record time, no one knows. We created the PR bell so the crowd can cheer you on when you achieve those goals.”

Batter up!: A UVU baseball game in photos Previous post

No titles, but good Utah Valley stories at state baseball tourney Next post