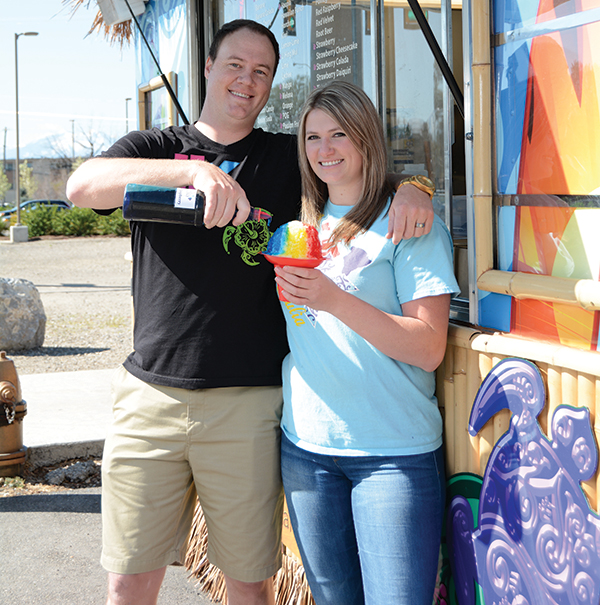 The original Provo location is still Hokulia’s most popular store, due in part to being south of the BYU stadium near the dorms. Stefani loves working at this location when she isn’t spending time with the couple’s 2-year-old daughter, Loxley.

Provo doesn’t have palm trees, but it does have authentic Hawaiian shave ice thanks to Clint and Stefani Severson. The Highland couple grew up in California and each spent their summer vacations in Hawaii where they learned to appreciate the difference between a regular snow cone and authentic shave ice.

“Snow cones are more granular and the syrup sinks to the bottom of the cup, while shave ice is soft, fluffy and absorbs the syrup really well,” Stefani says.

To sweeten the deal, Hokulia customers can add ice cream (vanilla, coconut, macadamia nut or pineapple sherbet) or a “sno cap,” which is a delightful drizzle of sweetened and condensed milk.

Clint and Stefani opened Hokulia Shave Ice in Provo in 2009 to earn money to send Stefani’s brother Jeff on an LDS mission after her dad passed away.

The name “Hokulia” has a tropical tie-in.

“Translated it means ‘star of desire,’” Clint says. “It is also an area on the Big Island of Hawaii that Stefani’s dad loved.”

The Seversons started franchising their sweet success with the help of Farr’s Fresh and they now have 14 Hokulia locations throughout Utah with more popping up all from California to Atlanta.

Franchisees fly into Hokulia’s training center in Utah and Clint travels to their hometown to help them open up the store.

Clint and Stefani drink up the chance to own a business all about summer fun.

“People can’t wait for us to open up because to them that means it is finally summer time,” Clint says. “It’s the quintessential summer treat.”