PROVO — It has been nearly two years since the Monte L. Bean Life Science Museum at BYU has been open to the public, but on Saturday, June 7, the wait is over.

In July 2012, the Bean Museum began expanding and renovating their home adding 32,400 square feet to their 55,000-square-foot building. Now with 25 new exhibits, the Bean Museum is ready to open it’s doors again.

Here are some of the changes and additions to expect at the Bean Museum. 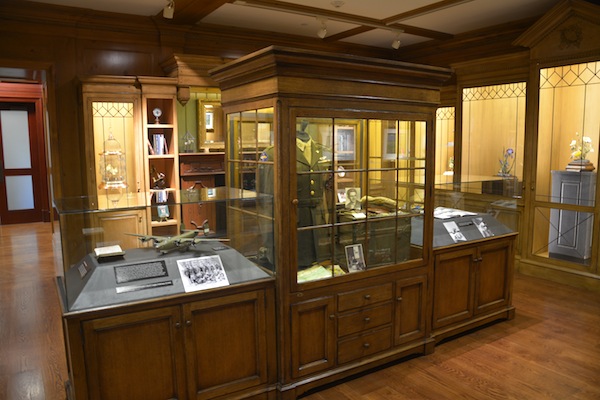 The renovations include artwork from LDS apostle, Elder Boyd K. Packer, as well as items from his service in World War II. (Photo by Rebecca Lane)

Elder Boyd K. Packer, a member of the Quorum of the Twelve Apostles for The Church of Jesus Christ of Latter-day Saints, has donated his works to the Bean Museum. The new “Boyd K. Packer Gallery” features about 1,000 pieces of his art including drawings, oil paintings and carvings.

Elder Packer always had a fascination with birds and art, which may have been why his older sister saved most of his artwork from a young age.

“You may think, ‘When would a man that busy have time to do that stuff?’ His … answer to that question is that, ‘I did it when I was preparing talks or lessons. It was a way to use my hands and yet allow my mind to be active in terms of planning and thinking about some of my assignments.'”

As well as his artwork, the wing displays some of his possessions from when he served in World War II. 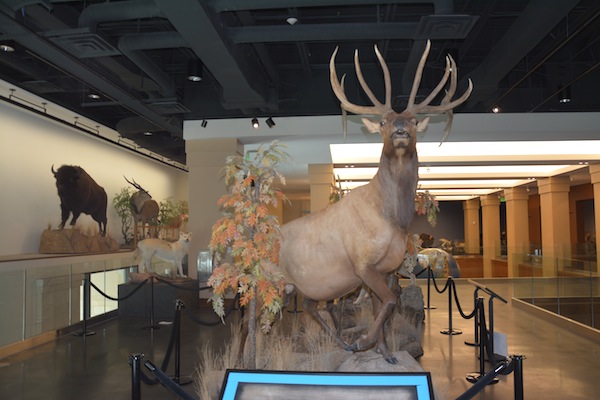 New taxidermy displays show the circle of life with their prey and predator exhibits. (Photo by Rebecca Lane)

Take a walk on the wild side with one of the most popular exhibits. The taxidermy animals are not merely mounted on the wall anymore. Now, because of a generous donor from Arizona, the displays are action packed, showing off prey and predator scenarios.

“One thing I’m excited about is that prior to a closing, a lot of what we did is heads on the wall,” St. Clair said. “And they’re beautiful. … But what we’ve tried to do this time, which I think is a great feature, is everything’s been put in a scene.” 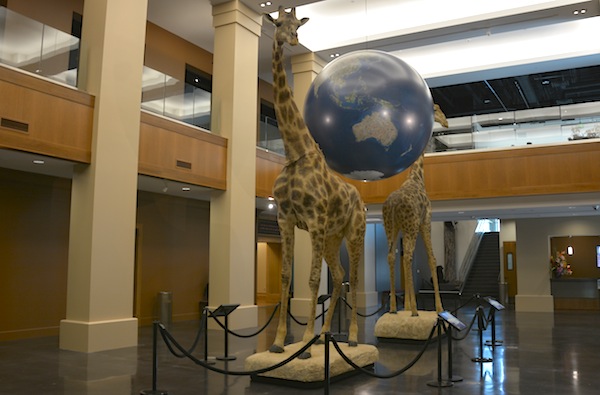 The globe hanging from the ceiling in the East Center Atrium has the most current NASA satellite images to make the globe accurate. (Photo by Rebecca Lane)

In the East Center Atrium, there is more to look at than the two large taxidermy giraffes. Hanging from the ceiling is a special globe, a eight-foot-in-diameter fiberglass globe. This globe is mapped with the most current NASA satellite images. 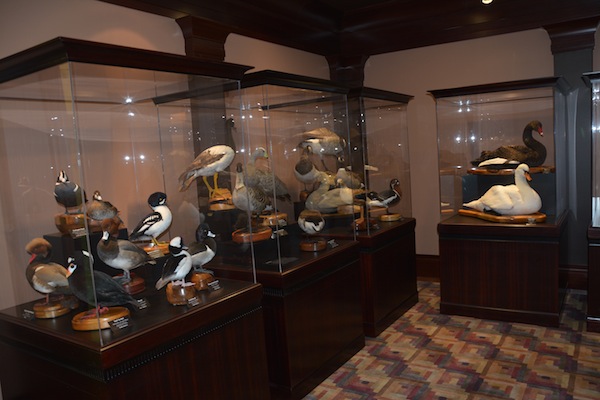 While these taxidermy birds existed in the Bean Museum before the museum closed, they’ve “flown south” to a new home with protective glass. (Photo by Rebecca Lane)

The birds that once lined the walls in the main atrium of the Bean Museum have been moved to the “Fred & Sue Morris Bird Gallery.” In order to protect the taxidermy birds, the museum purchased glass displays. 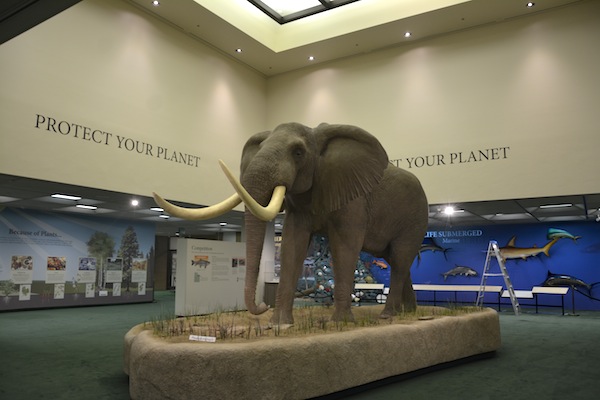 The museum’s theme, “Protect your planet,” is written on the walls near the elephant display. (Photo by Rebecca Lane)

In what was once the main atrium, a familiar friend remains — the elephant.

The old atrium is now called the West Center Atrium. On the walls, the museum theme, “Protect your planet,” is written where the museums walls once were open for upstairs visitors. Now the walls have been added so that the upstairs can be dedicated to research.

There are two main displays in the West Center Atrium including “Life Submerged: Marine and Freshwater” and “Because of Plants.”

The “Life Submerged” exhibit explores the freshwater and marine ecosystems with a special highlight on coral reef and deep-sea.

St. Clair, a botanist by training, is especially thrilled about the added display on plants in the “Because of Plants” exhibit.

“One of the things that was noticeably missing in the old museum, was much of a reference to plants,” St. Clair said. 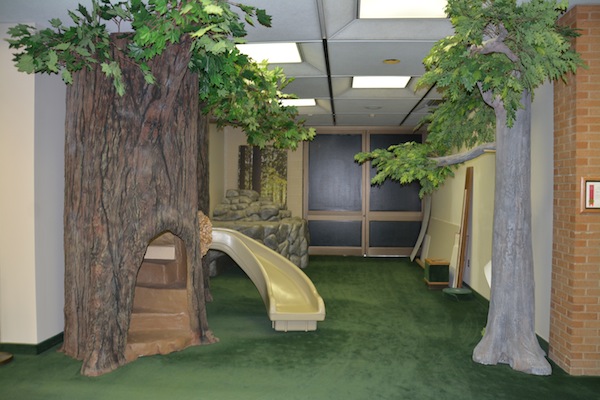 For antsy kids, the museum has added an interactive learning exhibit.

“We wanted someplace where children can play, but do it in the context of learning too,” St. Clair said.

Also, a fake talking owl will be perched on one of the trees in the kid play area which will have a familiar voice for fans of BYUTV’s “Studio C.”

Star of the show, Matt Meese, who worked at the museum for three years, recorded the voiceover for the owl.

In the future, there will also be a learning space for older children. A small home with a kitchen and bathroom will help teach kids about conserving resources.

While there are workers available to answer questions and give tours, the museum staff doesn’t want your questions to go unanswered.

A collection of educational videos designed to aid viewers learn more about the animals is on the Bean Museum website.

Once again, these videos feature Matt Meese, who will help visitors prepare for a museum visit.

Matt Townsend shares advice that will save your marriage Next post