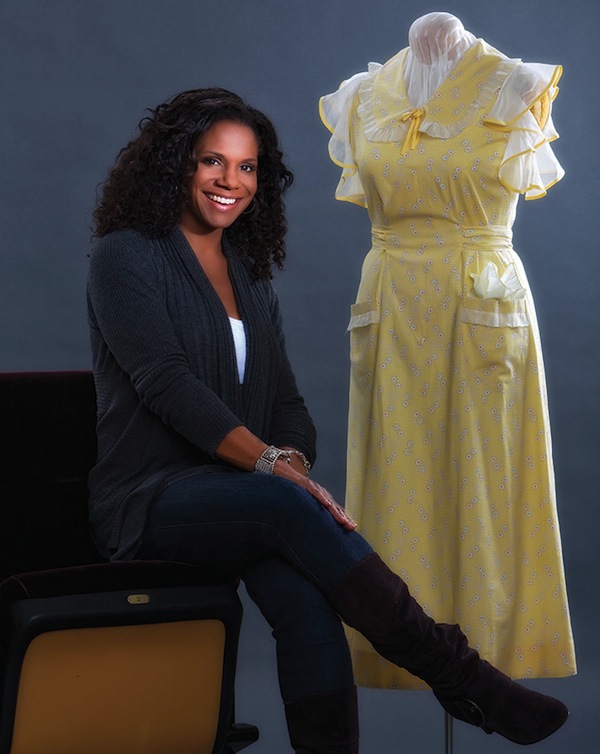 Audra McDonald won her sixth Tony Award on Sunday making her the most decorated actress in the event’s history. This photo was taken for Utah Valley Magazine in Orem. Audra wore the yellow dress during her run at the Orem Hale Center Theater’s “110 in the Shade.” (Photo by MaryLyn Linge)

On Sunday, Audra McDonald became the Tony Awards’ most decorated actress and delivered a passionate speech where she praised her Utah husband, Will Swenson. Four years ago, Audra and Will graced the pages of Utah Valley Magazine and the stage at Orem’s Hale Center Theater for a run of “110 In The Shade.”

Read on for the 2010 interview where Audra shares why her Broadway directors have their eyes on Utah, and find out what this non-Mormon thought of her husband in “The Singles Ward.”

Juilliard-trained Audra McDonald has four Tonys and two Grammys in her back pocket — along with memories of soloing in the Mormon Tabernacle Choir’s Christmas concert. In between shoots for ABC’s “Private Practice,” Audra fills concert halls and Broadway theaters on both coasts. But this summer, she’s giving up the red carpet (she never liked it anyway) for the 300-seat theater on the corner of 400 North and Orem Courtesy Boulevard. She and her boyfriend — Will Swenson, Tony nominee and star of “The Singles Ward” and “The RM” — are doing a two-week run of “110 In The Shade” to raise funds for Hale Center Theater, which is owned by Will’s family.

Audra spent an April day in Orem getting fitted for her costume and tossing her script around in photos for Utah Valley Magazine. Although her face and name are tops on Google, she is googling the same questions every woman faces — how to raise a well-balanced daughter, the truth about wheat grass, and how to “suck it in” for a photo shoot (OK, that last one came naturally during our laid-back shoot — she is a normal woman, after all). Here’s a portion of the conversation we had while she was getting her makeup done. Multitasking at its best.

UV: What’s the first thing that comes to mind when you think of Utah?

Audra: Beautiful. Wide open spaces. Friends and family. Olympics — that was the first time I spent time in Utah. I was blown away with the orchestra and symphony. There was incredible camaraderie in the streets. People didn’t know who I was back then, but an expectant young couple came up to me and said they were considering naming their baby Audra. That was cool! There might be an Audra running around Utah.

UV: Audra is a beautiful name! And we’re excited to see your name on a playbill in Utah County. What will it be like to perform in a small theater?

Audra: Like coming back to my roots. I’m very familiar with community theater. It’s how I was introduced to this industry. 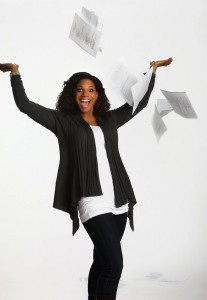 UV: What is motivating you to do this?

Audra: Will and I have been dating for about two years, and we decided it would be great to help Cody and Anne’s theater. (Cody is Will’s brother.) I’m bringing my daughter, and he’s bringing his sons. It’s a win-win situation. Plus, we both love “110” so much.

Audra: The scene leading up to Lizzy saying she is beautiful is a wonderfully constructed scene. Also, many of her scenes with her dad are gorgeous. The camaraderie between the father and daughter is memorable.

UV: What will you be doing in Utah when you aren’t on stage?

Audra: We’ll be hanging out with the kids. Going on a hike or two. And a bike ride or two. We want to spend time in the beautiful mountains.

UV: Have you seen Will’s performances in “The R.M.” and “Singles Ward”?

Audra: (Laughing) Yes, I have. I’m not Mormon, so I don’t think I got all of the humor. But it was interesting to be introduced to a whole new culture. I am also really impressed with Will that he wrote, directed and starred in “Sons of Provo.” That takes a lot of fortitude and ambition to see something like that to fruition. Also, I never got to meet Will’s mom, and she had a sweet part in the movie so I feel like I was able to meet her that way.

UV: What have you learned from being a mom?

UV: Did this fierce love for your daughter surprise you?

Audra: I was on bedrest for 3 1/2 months before I had my daughter. At one point, Zoe wasn’t moving around enough for the doctors, so they had me come in to check things out. Without any warning, a nurse got a noisemaker and put it on my belly. My baby jumped. I don’t want to say what flew out of my mouth, but if I would have had claws, I would have swiped the nurse. I felt this raw sense of wanting to protect my child.

UV: How do you balance your busy roles as actress, singer and mother?

Audra: With fatigue and guilt. I want to make enough money so she can go to college. At the same time, I want to spend enough time with her. You never know if you’re doing the right thing. If you were to actually pay a mother, she would make more than most CEOs. And truthfully, a mother is a CEO of a mini-corporation. But this corporation is all driven by love.

UV: What did you learn from your mom?

Audra: She taught me to take care of myself and support myself. For her, education was very important so that we would never have to rely on anybody else to take care of us. She wanted us to have our own bank accounts and have a fierce sense of independence, which I definitely have. It might get a bit obnoxious for people in my life, but I want to do everything myself.

UV: If you ever retire from acting, what other career path would you consider?

Audra: I’d love to open a winery with enough acreage to also have an animal rescue for dogs, horses, elephants — I love elephants. Maybe the elephants could crush the grapes!

UV: What makes you nervous?

Audra: Red carpets make me nervous. I’m afraid I’m going to breathe the wrong way. I don’t like getting ready for premieres. I’d rather be with a group of people in my apartment where we eat big old plates of Indian food and listen to good records on a record player. I still have stage fright. I’m nervous about my concert tomorrow night.

Audra: I’ll be away from my child, and I’m always nervous about that. Which is ironic because even if I’m home she might completely ignore me or run around doing her own thing, but at least I’ve got my eye on her. Another thing that has made me nervous in the past is flying. My dad died in a plane crash. I take a teddy bear with me whenever I fly. I feel like my dad’s watching me when I’m up there.

UV: What are your emotions right before a performance?

UV: What do you do to stay healthy?

Audra: Well, I’m turning 40 this summer, so I’m focused on staying healthy. Pilates and yoga are important to me. As a general rule, I drink water instead of carbonated drinks. I take a few minutes every day to focus on things I’m grateful for, and I say them outloud. I eat wheat grass juice. It’s the nastiest stuff in the world, but I drink 2 ounces a day because it’s good for the voice.

UV: What is it like to watch yourself on TV?

Audra: I don’t watch. Prior to “Private Practice” airing, they give us a DVD. I jump through it really quickly to see what shots they kept and which take they used. But I don’t focus on my performance. But I do like to watch my colleagues.

UV: How is live theater different from TV?

Audra: With stage theater, I have more control. Whatever I do is what happens. The director can’t touch me once it starts. With TV, your scene can get edited out. You really are at the mercy of others. Live theater is my first love, but television has also been great.

[pullquote]With stage theater, I have more control. Whatever I do is what happens. The director can’t touch me once it starts. With TV, your scene can get edited out. You really are at the mercy of others. Live theater is my first love, but television has also been great. [/pullquote]

UV: When you play the same role night after night, how do you keep it fresh and new?

Audra: It might be routine for me, but it’s a brand new experience for the audience. I also like to take in what has gone on in my day. I performed in “Carousel,” which includes a theme of domestic violence. We performed on the night O.J. Simpson was running from the law. It gave new meaning for all of us.

UV: This article will appear in our annual “Women’s Issue” of Utah Valley Magazine. What do you see as the biggest issues facing women in 2010?

Audra: A lot of the magazines and reality shows make us feel like we are less than we should be. We should not succumb to the celebrity brainwash. I’m guilty of reading People magazine or looking at Vogue and thinking, “I should be 10 pounds lighter.” But what does all this pressure teach our daughters? In reality, the perfect woman comes from the inside.

UV: I completely agree, but do realize that you are a celebrity?

Audra: I don’t see myself that way. My house is still a mess. I still try to lose weight. Some days I’ve got dirt under my fingernails. But as women we need to focus on things only we can accomplish. We get our kids to school. We serve others. We need to be the best at our roles instead of thinking, “I should go get that Botox thing going on.” That’s frightening.

UV: What it was like to sing with the Mormon Tabernacle Choir?

Audra: I sang with them at their Christmas concert in 2004. They were incredibly sweet and generous. Musically, they are impeccable. It was overwhelming to have all those voices sound so pure and singular. It’s quite a feat. A true treasure.

UV: What TV shows do you enjoy?

UV: Are you happy with your career?

Audra: I am happy. My desire is to do work that I can be proud of and can grow from. I want to do work that affords me to be able to take care of my daughter. And for that, I don’t need to be on the covers of magazines and I definitely don’t need the paparazzi. I’m not a girly girl who gets into the fashion and makeup. I wear makeup in the theater, so I do not like to wear makeup during the day. If I tried, people who know me best would say, “You are going to hurt yourself.”

UV: What advice would you give to parents about getting their kids involved in the arts?

Audra: The arts are very important. Parents can reach out and have their children join community theater like the Hale Center here in Orem. Churches always have a lot of arts going on. The thing I like to stress is that it doesn’t have to be the highest echelon of art. Take piano lessons. Sing with the choir in your church. Do local theater. Contact with the arts is the most important thing. Inevitably, if you get involved it means getting off the couch and away from the TV, and that’s always a good thing.

UV: Thanks for giving Utah County a reason to get out of the house and see top-notch live theater this summer. Enjoy your stay!

10 things Utah dads do better than other dads Next post