Home News Food Truck 101: An introduction to the Provo Roundup

Food Truck 101: An introduction to the Provo Roundup 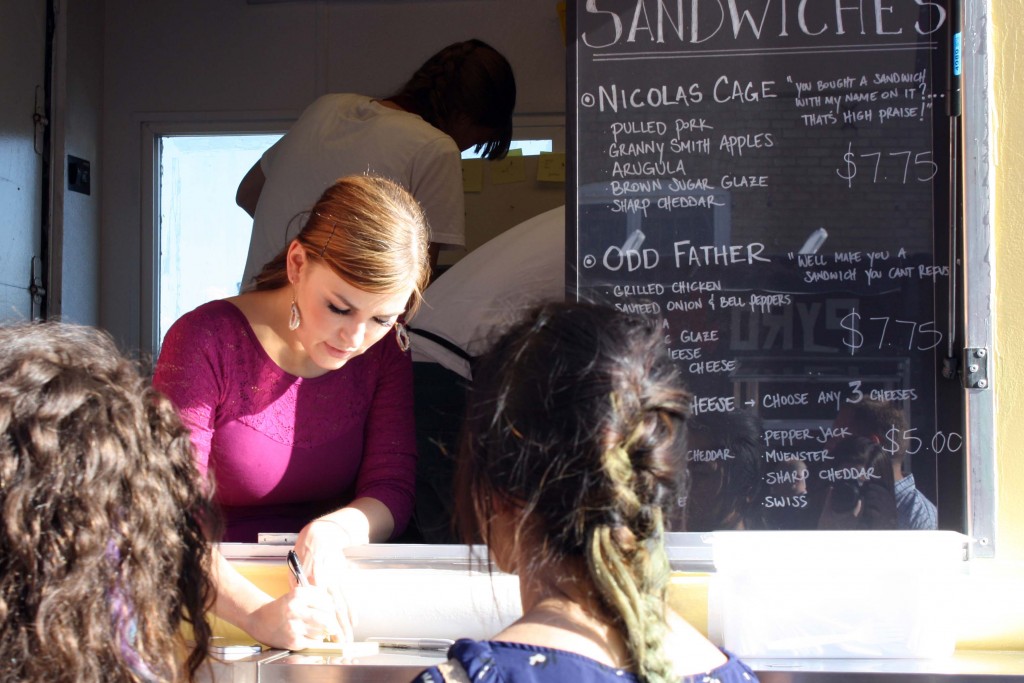 Every Thursday about a dozen food trucks roll in to the paved lot next to the Startup Building in Provo, 560 S. 100 West. It’s one example of how the food truck scene is exploding in Utah County after arriving only a couple of years ago.

(Interesting fact: The building used to be the Startup Candy Factory, from which the first candy bar was sold in America. Now, ironically, it’s a shared workspace for startup companies.)

The food trucks circle up from 5 to 9 p.m. to feed the masses — mostly college students and young families, but not excluding elderly couples and everyone in between. 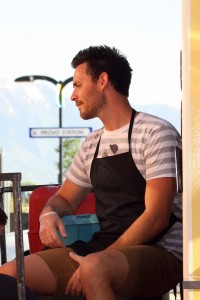 Dave Dinsbach, owner of the Mouse Trap, takes a break during the Provo Food Truck Roundup to talk with some friends on Thursday, June 5. (Photo by Madeleine Brown)

Grilled cheese, burritos, pizza, kebabs, tacos, corndogs, waffles, macaroni, doughnuts, shaved ice and much more are for sale to the 1,500 people who come each week to the Provo Food Truck Roundup.

“It’s all good. I love it. I want to try everything,” said Meikel Reece, a regular food-truck customer. “I think it’s really high-quality food, people who really care about their food, and they’re making it happen. I love that this is happening in Provo.”

Truck owners say Utah Valley has what it takes to support food trucks: a young and tech-savvy population receptive to food truck advertising through social media and entrepreneurial folks excited by the idea of starting something a bit cheaper than at a restaurant.

“Obviously it’s way more work than you’ll expect. It’s that times 10. But you want to do it because you love it. I just love food. I love cooking and creating,” said Dave Dinsbach, who opened his artisan grilled cheese food truck, called The Mouse Trap, in May.

Dinsbach started his business with his bananas foster grilled cheese and other dessert sandwiches. He said it’s hard to relinquish power while teaching and trusting staff to cook and prep the sandwiches to his specifications. But so far, so good for the Provo entrepreneur, albeit he’s a little sleep-deprived after a long night of grocery shopping and food prep.

“(The business) is too young for me to say anything bad about it, but it’s only going up from here,” Dinsbach said. “I love that (food trucks) are exploding. I want all of us to get together and do stuff like this every day.”

One of the event organizers and a native of the Bay Area, Anders Taylor, said San Francisco is one of the first cities where food trucks became popular because they are accessible and mobile.

“I think people are figuring out that Provo has what it takes to support food trucks,” said Taylor, calling Provo a natural fit.

The Provo Food Truck Roundup started last winter with four or five trucks, live bands and a place to eat inside the Startup Building. Now the crowds are growing, thanks to word of mouth and increasing numbers of new food trucks.

“We’ve had a bunch of new food trucks. I think also just because the weather is so nice and people are starting to hear about the food truck roundup. There’s been a ton of people coming out each week,” Taylor said.

In an effort to keep up with the organic growth, Taylor said they’re working with the city to get permits to expand on to the street and shut down the block. So far, the city has been on board with food trucks and recently created a mobile food vending license.

“We’re supportive of things that bring energy to Provo,” said Dixon Holmes, deputy mayor over economic development for Provo City. “Food trucks kind of give a hipness and a vibe to our community, and so it’s just part of the overall climate and quality of life, so that’s a positive thing.” 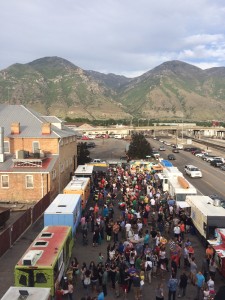 Food trucks gather in Provo on Thursday, May 29. (Photo by Courtney Taylor)

Holmes said there’s always some pain with any disruptiveness, but that there’s plenty of room in the metaphorical tent of the food industry.

“Some of the restaurants are watching with interest and some concern, and that’s not lost on the city, so the municipal council will be considering some regulations to maybe level the playing field for everybody,” Holmes said. “We’re hoping that they won’t be overly burdensome for any one group, but also protect the brick-and-mortar restaurants.”

The roundup is similar to a mall food court, but unique and tastier food, according to food truck fans. Food trucks are often more convenient and cheaper than brick-and-mortar restaurants.

Husband and wife duo Matthieu and Kelsey Giraud-Carrier own and run Pound It Kebabs, which they say is a fun adventure, even though he’s busy earning a doctorate degree and she’s pregnant. They said the roundup is a great way to build business and introduce Americans to kebabs.

“It’s standard European street food, so it’s very popular in Germany and France,” said Matthieu Giraud-Carrier, a native of France. “You can’t find it here in the U.S., so we decided to keep it up here. It’s going incredibly well, actually.”