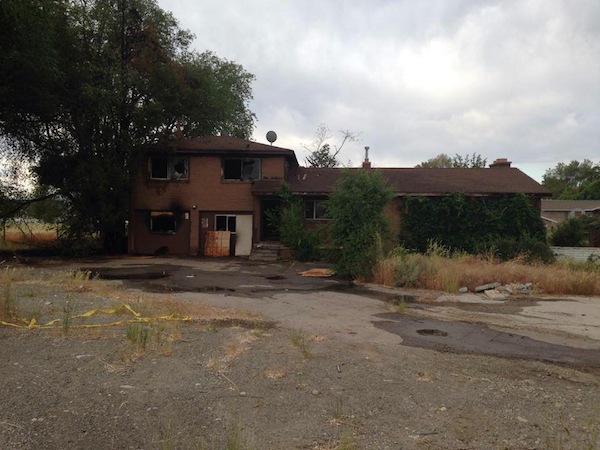 Police are searching for a man they’re calling a person of interest in a suspicious fire at an abandoned house on Tuesday morning. Surveillance footage shows the man buying gas at the 7-11 at Center Street and Geneva Road in Provo, an hour before the fire started at the house.

The fire at the house was the second at the abandoned building, at 1585 W. Center St., which is owned by the Utah Department of Transportation and was scheduled to be demolished Tuesday. It also was set on fire on April 22, which was the last in the series of arsons until Tuesday. There also was a brush fire at 170 E. 900 South on Tuesday, which was started less than 30 minutes after the house fire, said Provo deputy fire chief Tom Augustus. 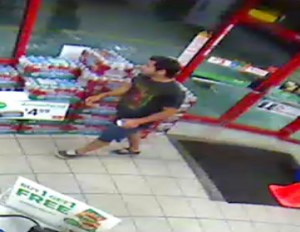 Provo police are searching for a man seen in surveillance footage from the 7-11 at Center Street and Geneva Road in Provo. He bought gas an hour before a suspicious fire at 1585 W. Center St. on Tuesday. (Photo courtesy Provo police)

Provo formed a task force in April to get to the bottom of the arsons, and also is working with the Bureau of Alcohol, Tobacco, Firearms and Explosives.

Augustus said it’s too soon to call the fires on Tuesday arson, because they need to wait for crime lab results. However, an arson-detecting dog hit on the inside and outside of the house, which indicates an accelerant likely was used.

“We haven’t made those connections yet, but it’s very similar,” he said.

Augustus said firefighters and detectives are working hard to solve the arsons, following up on leads from earlier fires and the ones on Tuesday.

“We don’t really have anything right now other than people should be aware of things going on around them,” he said. “If something looks wrong, it’s better to give us a call and let us follow up on it.”