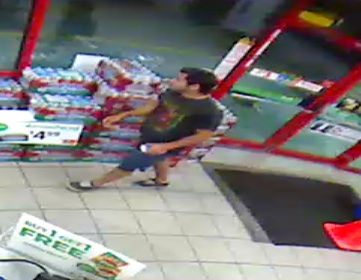 Provo police are searching for a man seen in surveillance footage from the 7-11 at Center Street and Geneva Road in Provo. He bought gas an hour before a suspicious fire at 1585 W. Center St. on Tuesday. (Photo courtesy Provo police)

A house that was the site of an arson in April was again set on fire on Tuesday, and this time police have a photo of a man who might be a suspect. The man was seen on surveillance footage buying gas at the 7-11 at Center Street and Geneva Road in Provo, an hour before the 5:30 a.m. fire at the house, at 1585 W. Center St.

There also was a brush fire at 170 E. 900 South on Tuesday, which was started less than 30 minutes after the house fire.

The fires are the latest in a series of arsons that started on March 13, targeting boarded up homes.

Accused cop killer Meagan Grunwald’s attorneys want her trial moved out of Utah County. They say the publicity in the case will make it difficult to find impartial jurors in Utah County.

The 17-year-old girl has pleaded not guilty to murder and other charges.

Police arrested an Orem man this week after a girl told police he had sexually abused her hundreds of times over a period of four years. When police arrested him they also reportedly found meth.

Naked man on the run

Early Friday morning, Lone Peak police officers on patrol in Highland Glen Park found, chased and arrested a naked man who turned out to also be a registered sex offender. The man reportedly told police he was naked because he was skinny dipping in a pond. He also had a girl’s T-shirt with him, and other items that a little girl would own were found nearby — there wasn’t a child with him.

Former Pleasant Grove doctor and convicted killer Martin MacNeill was back in court on Thursday, and his cases were again delayed. He’s still awaiting sentencing after being convicted last year of killing his wife in 2007 — a judge postponed arguments on a motion in that case on Thursday because the trial transcript isn’t ready. In his sex abuse case, there was a scheduling problem so attorneys didn’t argue motions in that case either.

He’ll be back in court again next week.

New Kids on the Block: 30 business rockstars in their 30s Next post