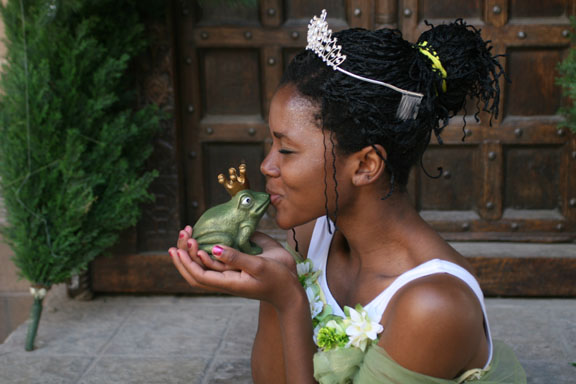 The princess kiss her frog in this photo courtesy the Princess Festival.

When you’ve got six daughters and 36 granddaughters, you know a thing or two about making little girls feel like princesses. In fact, Pleasant Grove developer Ron Hatfield has been giving tens of thousands of local girls the royal treatment at his annual community event, the Princess Festival, since 2008.

What started as a small gathering to raise money for Hatfield’s In Our Own Quiet Way  charity has evolved into a large-scale princess-party franchise with companion royal balls. (A portion of the proceeds still benefit the charity, and the Princess Festival also gives free tickets to dozens of other local charities.)

This summer, the Princess Festival will travel to five different Utah cities, as well as Mesa, Arizona. Hatfield says he expects between 40,000 and 45,000 attendees in all, up from the some 15,000 who came to last year’s festival at Thanksgiving Point.

In Utah County, the Princess Festival will be June 17-21 in the Main City Park in Vineyard. Utah tickets are $25 for one adult and child, with $10 for each additional attendee.

At the festival, visitors can mingle with more than 60 costumed cast members, who include both classic fairytale princesses (think Snow White and Cinderella) and princesses created just for the event. There are also “Hobbydukes” (wizened old people who help the princesses) and performers in the mix.

Attendees can watch short performances, listen to stories, go on “quests” where they complete simple tasks, and, of course, interact with royalty. Hatfield said the little girls who attend the festival are particularly enchanted by the abundance of princesses.

“It’s just astonishing to them. They just stand there in utter awe,” said Hatfield. “It’s easy access to these characters.”

Terry Marchbanks, 63, of Pleasant Grove, has taken several of her granddaughters to the festival for the past three years. She said she loves the whole concept of the event, particularly the emphasis on service and kindness.

‘More than a princess’

The Princess Festival isn’t just all toddlers and tiaras. Hatfield said he hopes to teach core values of service and selflessness to the little girls who attend. Attendees are taught they must become “more than a princess” by being kind and helping others, and they must “discover the magic within” by channeling their inner strength and solving their own problems — no Prince Charming required.

Dayna Magleby, 28, a Provo mother of three, has taken her daughter Jayne to the festival twice. She says she loves the happy atmosphere and the fact that most of the attendees arrive in costume. Jayne’s favorite part was having her face painted, Magleby said.

Both Magleby and Marchbanks said it’s been hot at the festival in years past, so attendees should come prepared with sunscreen and drink plenty of water. But Marchbanks said she’s happy to brave the heat.

“I’m sure we will go again this year,” she said. “Any time I can help my little ladies feel beautiful and special we are there!”

When and where: June 17-21 at Main City Park in Vineyard. Other dates and Utah and Arizona locations throughout the summer. See website for a list.

Etc: The Princess Festival organization also hosts Royal Balls of Everley, daddy-daughter dances that include dinner. The Utah County ball will be June 18 at 7 p.m. at Castle Park in Lindon. Tickets to this ball are $99 per couple. See website for additional locations and tickets.

Pool pro: Cathy Smits is the authority on all things aquatic in Provo Previous post