Home Sports BYU Is the Curse of Max Hall real?

Is the Curse of Max Hall real? 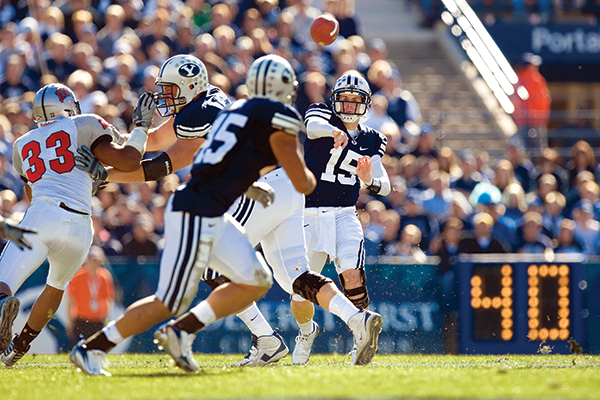 Who knew that a moment that brought me so much joy would later cause so much misery?

When Max Hall hit Andrew George for the game-winner in 2009, I went bonkers — absolutely nuts. Any win is a good win, but beating your rival on a gut-punch play in overtime is exhilarating.

When I was driving home listening to the post-game show and heard Max Hall’s rant for the first time, I thought to myself, “That’s not going to go over well. This is WAY worse than magic happens.” Little did I know the shadow those comments would cast over not only the rivalry, but also the program as a whole.

I’m not the first person to mention the Curse of Max Hall, but in the past it has focused strictly on the Cougars’ shortcomings against the University of Utah, but it goes much deeper than that. I’m usually not one to believe in curses, but the Curse of Max Hall is real. Don’t believe me? Check out the evidence below. Taken individually, you might say it’s just a coincidence, but taken collectively it’s hard to refute.

Tight ends not so tight

Prior to George catching that game-winning touchdown, the tight end had been an integral part of the Cougars’ offensive attack. BYU had morphed from Quarterback U to a tight end factory. Names like Chris Smith, Itula Mili, Chad Lewis, Doug Jolley, Spencer Nead, Daniel Coats, Jonny Harline, Dennis Pitta and Andrew George come to mind.

But ever since that fateful night, BYU’s tight ends have been a virtual non-factor. The drought in tight end production wasn’t because of a dearth of talent either. The Cougars had Richard Wilson and Austin Holt, who were both highly rated tight end prospects, come through the program during this time. The only explanation for this dip in production that comes to mind is Max Hall’s rant, which he was able to make because of the touchdown strike to George.

Harvey Unga was supposed to be the constant on offense as the team broke in a new quarterback in 2010. Unga was the school’s all-time leading rusher going into his senior season, but had to withdraw from school before the season started due to Honor Code violations. The presence of Unga would certainly have taken the pressure off of either Jake Heaps or Riley Nelson during the 2010 season, but without Unga the Cougars stumbled out of the gate losing four of the first five games of the season.

On the outside looking in

In the spring and summer of 2010, the landscape of college football was changing drastically — and on an almost daily basis. During this time, our chief rival was invited to eat at the big boy table, while we were left out in the cold. The past three years of independence have been better than toiling in anonymity on the MTN, but it still stings that Utah and TCU are positioned better than we are going forward.

Since 2009, there has been instability on the offensive coaching staff. After an uneven season in 2010, Robert Anae left BYU to coach the offensive line at Arizona. Quarterback’s coach Brandon Doman was promoted to offensive coordinator. At the time fans were excited about the change. Doman was young and popular with the players, but after two seasons of lackluster results, the entire offensive staff was asked to reapply for their jobs following the 2012 season. Doman’s services were not retained and much to the chagrin of many a Cougar fan, Anae was brought back in to install the go-fast-go-hard offense he learned under Rich Rodriguez at Arizona.

Losing to Utah State — Are you kidding me?

If you think everything you’ve read to this point is bad, just wait … it gets worse! For the first time since the Clinton administration, BYU lost to Utah State — and the game wasn’t even close. The Cougars followed up that game with two near misses. BYU narrowly beat the Aggies in 2011 after Riley Nelson was inserted in the game in the second half to ignite the offense. The following year BYU could only muster six points against Utah State and lost Taysom Hill for the year as the Cougars were attempting to run out the clock.

Inability to beat the Utes

Finally, since Max Hall let the Utes know how he really felt about them and their fans, the Cougars have gone winless against Utah. Some losses were close and some were embarrassing, but they all were devastating in their own way.

Breaking a curse can be difficult. Just ask any Cubs fan! As much as it sucks for the fans that the Holy War is on hiatus the next two years, this might be just what the Cougars need to get rid of the bad karma. Things already seem to be moving in the right direction. The offensive coaching staff seems to be stable. The Cougars have a star quarterback to build around. And there is no Holy War this year to distract the team. Only time will tell if this curse is real, or just something I’m using to distract myself during the summer doldrums while I wait for kickoff against UConn on August 29.