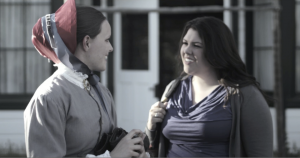 Lela Kovalenko as Martha Hughes Cannon and Katie Jarvis as Julianne in the 2014 film Women of Faith.

Martha Hughes Cannon made history in 1896 when she became the first female state senator elected in the United States, defeating both the odds and her own husband, who was also on the ballot.

Minerva Kohlhepp Teichert, an independent, opinionated woman who painted more than 400 murals during her life, left the West and a suitor to attend art school in New York City in the early 1900s.

And Mary Frances Sturlaugson became the first black LDS sister missionary after courageously joining the Church in 1976 — a time when her skin color precluded her from the Church’s highest blessings and covenants.

These three LDS heroines are linked through their shared experience of living with the challenges that come from being a woman of faith. And now, their stories have come to life in a new short film available for free streaming online (see trailer below).

“Women of Faith” began as a play, produced and performed at BYU by nine female theater students as part of a senior capstone requirement. The work follows the story of Julianne, a modern young woman who visits a familiar portrait gallery to find answers to pressing personal questions. When Julianne takes a close look at the six women in the portraits — women like Elaine Cannon, Irene Corbitt, and other LDS history greats — she discovers answers she never expected to find.

The play’s four-performance run was met with great praise, including a donation by one viewer who asked that the money be used to keep telling the story. Because the nine students were graduating and going in separate directions, it wasn’t feasible to continue performing. But that didn’t mean there weren’t other ways to continue spreading the message.

“We were prayerful about what to do with the money,” said Amber Richardson, who multi-tasked as the screenwriter, a producer, and an actor for the film. “We thought the best way would be to create a film. We received a lot of divine aid throughout the process.”

After launching a Kickstarter campaign to bring in additional funds, the crew raised about $7,000 to cover things like equipment rental, costuming, and technical needs.

“No one has been paid, though,” Richardson said. “We don’t have an agenda outside of telling these stories and sharing our testimonies and using our talents to build the kingdom.”

The film premiered earlier this year at the LDS Film Festival, and since then it’s been viewed thousands of times online. Richardson and fellow creator Anna Hargadon have also hosted screenings, which they call “Daughters Firesides,” where they share the lessons they learned about womanhood and the Gospel while creating the film. In a time when questions about gender roles within the Church are especially prevalent, these lessons are becoming increasingly important.

“The Gospel teaches us that men and women are completely equal, but it can be hard to see that in the structures that surround us,” Richardson says. “And oftentimes that equality isn’t actually manifested on a local level. All this has created confusion for me, and it’s been difficult to comprehend my worth in God’s eyes and to accept it and let it begin to guide my actions and choices. By engaging in these stories it’s difficult to deny that these women and many, many others really understood their worth and let it guide their choices. They were powerful people and powerful forces for good.”