Home Sports BYU What does Taysom Hill need to do to win the Heisman?

What does Taysom Hill need to do to win the Heisman? 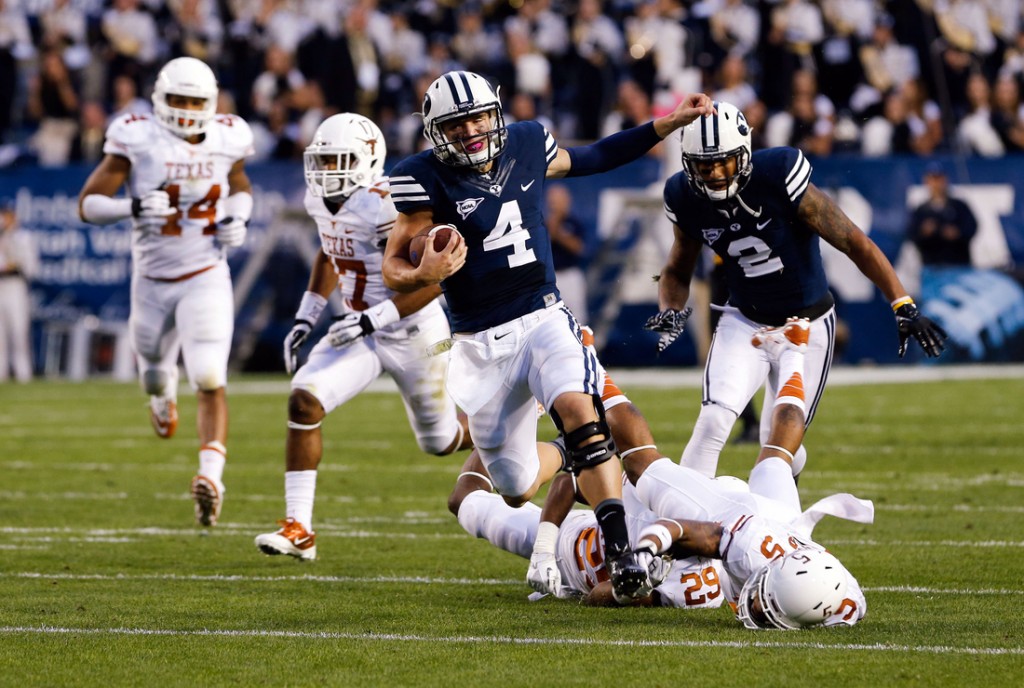 As a sophomore in 2013, Taysom Hill had a breakout season. But with that success comes the spotlight. Hill has already been named to a number of preseason watch lists, including one for the Heisman Trophy. Only time will tell if Hill really has a shot at winning the Heisman, but if he’s able to accomplish the following things he will at least be in the conversation.

Ty Detmer’s thrust himself onto many Heisman watch lists when he defeated defending national champion and No. 1-ranked Miami in the first game of his junior season. More recently, Robert Griffin jump-started his Heisman campaign when he led Baylor to a shootout victory over 14th ranked TCU in 2011. If Hill is able to have a repeat performance against Texas and lead the Cougars to victory in Austin, he could have a jump on the competition in the Heisman race.

Only five players in FBS history have passed for 3,000 yards and rushed for 1,000 yards in a season. Johnny Manziel was the most recent player to do this in 2012 when he won the Heisman Trophy as a redshirt freshman. Hill came about as close as you can to those marks last season when he passed for 2,938 and rushed for 1,344 yards. If Hill is able to improve on his paltry 54 percent completion percentage, he should be able to increase his passing numbers enough to reach the 3,000 yard plateau.

Take a licking and keep on ticking

It was a miracle that Hill was able to make it through last season without suffering a major injury. One of the main things that could keep him out of the Heisman conversation is if he were to miss an extended period of time due to an injury.

Have a killer marketing campaign

Men of a certain age like myself are sure to remember the Tysman for Heisman campaign. Players outside of power conferences face an uphill battle when competing for the Heisman Trophy, so the marketing department at BYU should do whatever it can to raise Hill’s profile with Heisman voters. I’ve taken the liberty to come up with an idea to help get them started.

Last season we found out from BYU linebacker Kyle Van Noy that the team jokingly called Hill “Taters” because he was from Idaho. The Cougars should steer into that one and get Hasbro on the line and have them whip up some Mr. Potato Heads emblazoned with Hill’s number 4 on his chest and a BYU helmet on his head. It might seem corny, but it’s definitely memorable.

Hope Jameis Winston keeps shooting himself in the foot

It’s been an odd off season for reigning Heisman Trophy winner Jameis Winston. This spring, Winston was cited for shoplifting crab legs at a local supermarket. If he continues to have off-field distractions like this one, his bid to become only the second player to win two Heisman Trophies could be derailed. This would open the door for a player like Hill to swoop in and claim the award.

The most important thing that Hill can do to secure himself a seat at the Downtown Athletic Club in December is win. Stats are important, but those stats will be irrelevant if the team isn’t successful. If Hill can lead the Cougars to the special season that everyone is hoping for, he might just be the second BYU player to hoist the most coveted award in college football.