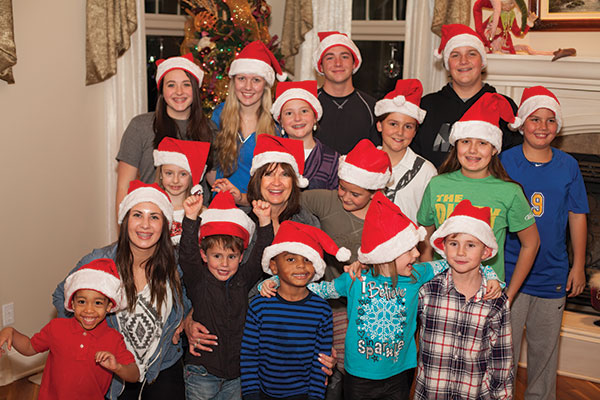 Lynnette Loveland has 17 grandchildren. Her four adult children all live within 10 minutes of her Alpine home. They are all entrepreneurs, with business credits including Blue Lemon, ModBod, Costa Vida and Xactware.

Lynnette Loveland’s name, fingerprints and generosity are all over the Loveland Living Planet Aquarium in Draper and the Museum of Natural Curiosity in Lehi. This twice-widowed Alpine grandmother also built the performing arts center for the Heritage School in Provo.

To the community, the Loveland name clearly means philanthropy and entrepreneurism. But to Lynnette, it means Sunday dinner every week for her posterity, who all live within 10 minutes of her home. It means “grandma camp” on Mondays in the summer. It means family trips to Lake Powell and Maui. But most of all, it means being a cheerleader.

“My role for my adult children is to be there for them and tell them they are doing great — I marvel at them,” she says. “There are many ways to say ‘I love you,’ and I want them to know I’m proud of them. But it hasn’t been easy and they haven’t always made choices I would make. But we have a strong feeling of love, and I’ve learned the small stuff doesn’t matter.”

Her philosophies and philanthropy both have their foundation in Xactware, which she founded with her first husband, James Loveland. Lynnette later sold the company after James passed away in 2005.

Lynnette fosters kindness and service in the next generation through a birthday tradition with her 17 grandchildren. She gifts each of them two $50 bills.

“They get to spend one of the $50 bills on themselves, but the other one they have to give away,” she says.

The grandchildren have donated to Primary Children’s Hospital or directly to people they know who have hardships.

“My granddaughter gave hers to a friend whose sister had been hit by a car,” Lynnette says. “It’s a fun tradition and it teaches them the joy of serving. It’s a big part of who we are as a family.”

Lynnette’s generous and soft character was defined and refined when her 3-year-old son drowned in Orem. She had two older boys (ages 7 and 8) and was expecting her first daughter (Amanda). Michael was the third boy to drown in that canal in one week.

“Everyone handles grief differently,” Lynnette says. “One of the families divorced after their child died. But for us, it brought us closer and made us stronger.”

That strength came in handy when James and Lynnette built a construction business together and then founded Xactware —neither of which were overnight successes. That strength was essential when James was diagnosed with cancer and died 13 months later. And Lynnette was again tested when her second husband died after only three years of marriage. 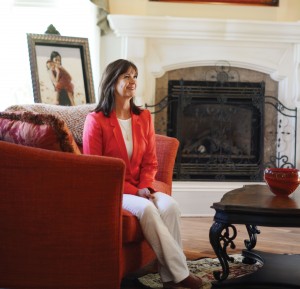 Lynnette Loveland “craves exercise” and is up by 5:30 or 6 each day to get her fix through yoga or swimming. The week before this interview, she hiked Angels Landing in Zion National Park. Her greatest strength, however, is her tight-knit family that has maintained its closeness even though her husband, James, passed away. The Xactware founder left his family a legacy of entrepreneurism and philanthropy.

All the world’s a stage

Lynnette has enjoyed each stage of parenthood, but “grandma” is her favorite. The teenage years were not.

“Teenagers are the hardest,” she says. “Honestly, it’s scary when they are in junior high and high school because so many things can go wrong.”

She could no longer keep her children at her knee like she did when her husband was in the Air Force in their early marriage.

“The three boys were with me constantly,” she says. “They never had a babysitter. We didn’t get away as a couple for 10 years.”

“The family is really close today because that’s how we started out,” she says. “It wasn’t about friends. It was about the family being together.”

Lynnette’s mothering strategy included music lessons when they were young.

“They all had to practice, and I would give them Smurfs as rewards if they learned so many pieces,” Lynnette says.

The children had various skill levels and love levels for their instruments, which Lynnette says requires a delicate balance.

“You can destroy their love for something — like music — if it’s pushed on them,” she says.

The Loveland family band included piano, saxophone, drums and violin. Every family Christmas video includes Lynnette at the piano with kids on their instruments. Now the tradition has expanded to include all the grandchildren.

“On Christmas Eve, I draw names and each child performs — music or dance or whatever they want to show us,” she says. “Holidays and every day are about family for me.”