Home Moms & Family Because I said so The dinnertime standoff 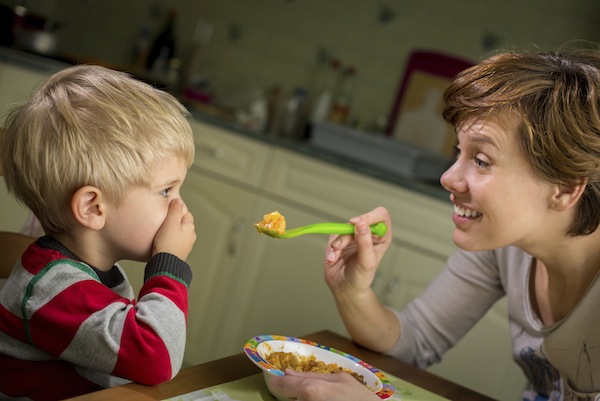 Every day around 5:30 p.m., one of my kids inevitably wanders into the kitchen and utters that dreaded four-word phrase: “Mom, what’s for dinner?”

I say “dreaded” not because I despise cooking and never meal plan and am constantly winging it for dinner. I actually love to cook — or at least I used to — and I think meal planning is fun. (Cookbook nerd alert!) The question is dreaded only because I know it’s the beginning of the dinnertime battle. Please tell me I’m not alone.

No matter what I say I’ve prepared for dinner, it will likely be met with protest. A nicer meal like honey lime chicken enchiladas with cilantro lime rice? They’ll protest the green stuff in the rice. Something simple like spaghetti and meatballs? My son prefers meat sauce to meatballs while my daughter likes her noodles plain; both will protest my use of whole-wheat spaghetti.

Even when dinner is a sure-fire kid favorite, like pizza, there is bound to be debate about the toppings. One child wants ham and pineapple, the other will only eat pepperoni. My take-out solution, by the way, is to pick up a Papa Murphy’s Perfect Pizza: half pepperoni, half Hawaiian, total genius.

Sometimes the protests aren’t because I prepared a meal they don’t like. It’s because I made food they love but I made it on the wrong day. You know, like on Sunday when I made pancakes for breakfast and my daughter was disappointed because I apparently always make pancakes and she loves crepes. So on Thursday I made her crepes for breakfast — which I loathe to do, by the way, because it takes so long to cook up the batch — and she complained that she would have preferred pancakes. Seriously.

There is part of me that wants to give up already and just serve them cereal and chicken nuggets and Cheetos every day — that would be their ideal meal plan — but I can’t do it. I care too much about the food my family eats because I know it has a huge impact on health and behavior. I try to stay motivated by telling myself that old parenting age: They’ll thank me when they’re older.

Occasionally I’ll tire of the mealtime battles and go on strike for a week. You could say I’m done with making dinner. Of course, my kids don’t really notice that I’m on strike because they’re too jazzed about the simple meals we’re having. Quesadillas! Hot dogs! Breakfast for dinner! Dinnertime is still a gong show on these days — my kids bicker about who sits where, get out of their seats way too many times to “check” on random things around the house and someone always spills their drink — but at least it’s a temporary respite from a steady stream of disapproval.

I’m slowly seeing enough progress to keep me from quitting the kitchen completely. All the kids have a few vegetables they actually like, and you better believe I serve those at every meal. I’m getting better at keeping foods separate when possible because the kids prefer to eat a la carte. They love dip, too, so I try to offer a sauce at most meals — tzatziki or hummus if I get my way, ranch or ketchup if my kids get their way.

Recently for dinner I made panko-crusted tilapia and couscous, one of the few dishes my oldest son wholeheartedly approves of. (Yes, I know his food preferences make no sense). In between bites he offered me praises including “This is so tasty,” and “Mom, you should open a restaurant.”

Next time I hear, “Mom, what’s for dinner?” I’ll try to keep those affirmations in mind.

5 ways to lead LDS youth without taking over Next post