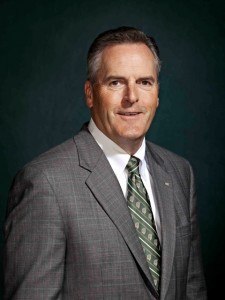 Val Hale is stepping down as the president and CEO of the Utah Valley Chamber of Commerce to take a position with the Utah state government.

The Utah Valley Chamber of Commerce announced today the resignation of the Chamber’s president and CEO Val Hale.

Hale has accepted a position as the executive director of the Governor’s Office of Economic Development after being appointed by Utah Governor Gary Herbert.

“The Chamber is losing a great leader today,” said Nathan Hyde, chairman of UV Chamber of Commerce and senior counsel at IM Flash, in a press release.

“During his tenure as president and CEO, Val transformed the Chamber into a stronger and more relevant voice for the business community.  Under his direction, the Chamber became a forceful advocate for important and difficult countywide topics like clean air initiatives, branding initiatives and economic development. He was also responsible for creating a new, tiered membership structure that allows businesses more flexibility in how they engage with the Chamber.”

During his time with the Chamber, Hale has made many changes including adjustments to governing bodies, including the establishment of the Executive Roundtable (consisting of 25 top Utah Valley CEOs), the Board of Governors (75 top business and civic leaders from throughout the valley) and the Regional Advisory Board. The Chamber also reports record revenue and membership growth over the past two years under Hale’s leadership.

Hale finishes his work with the Chamber on July 31 and begins working his new position as GOED on Aug. 4. While the UV Chamber Board of Directors searches for a new president and CEO, Chamber executive Vice President Donna Milakovic will oversee the Chamber.