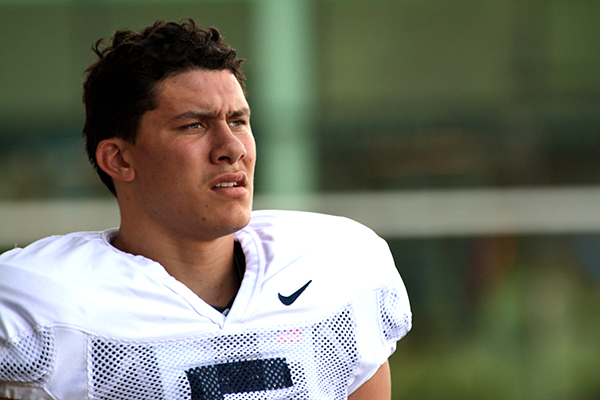 Alani Fua is one player that could take over Kyle Van Noy’s position this year. (Photo by Matt Bennett)

It’s been a long offseason for BYU fans. Whether it’s not getting invited to eat at the big boy table with the P5 conferences, “sockgate” or players getting kicked out of school before even playing a down, there hasn’t been a lot of good news for the Cougar faithful. But that’s all about to change.

Fall camp is just around the corner, and with that we can focus on what really matters — what happens on the field. There’s a lot of hope and uncertainty going into this season. Below are eight burning questions about this year’s team that may be answered during fall camp.

1. Who will replace Kyle Van Noy?

When Kyle Van Noy graduated to the NFL, he left a huge hole in the defense. The Cougars will miss not only his tackling, speed and eye for the ball, but also his leadership. Van Noy was the heart and soul of the Cougar defense the past two years, and it’s unknown who will step in to fill his shoes.

There are a number of candidates, including Alani Fua, Bronson Kafusi and Robertson Daniel. All three played key roles on last season’s defense, but do they have the charisma and leadership that Van Noy displayed throughout his career? Only time will tell.

2. How good will the secondary be?

This is a question that is often asked entering the season, but the Cougars seem to have speed and athleticism they lacked in the past. Daniel and Craig Bills bring experience to the two safety spots. There is also added depth with Nebraska transfer Harvey Jackson and the highly regarded Dallin Leavitt. The question marks come at the cornerback position.

Going into fall camp, Jordan Johnson and Trent Trammell are listed as the starters, with Trevor Bateman and Skye PoVey listed on the two-deep. How Johnson and Trammell recover from last year’s knee injuries will go a long way in telling how the Cougar secondary will fare this year.

3. Will the offensive line improve?

Fair or not, the offensive line took a lot of heat for some of the offensive shortcomings last year, especially the Cougars inability to score touchdowns in the red zone. This year the unit is teaming with experience and is projected to be one of the strengths of the team. Phil Steele even went so far as to rank the unit as the 15th best offensive line in the country.

One factor that may have aided in the inconsistency up front was learning Robert Anae’s new Go-Fast Go-Hard offense. In year two of the offense, you would expect to see fewer mistakes. If the Cougars are going to improve on last year’s disappointing 8–5 record and have the special season many are expecting, the offensive line will need to be a strength. 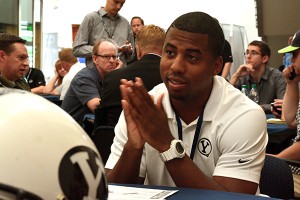 Jordan Johnson is listed as a starter going into fall camp. (Photo by Matt Bennett)

Before serving a mission, Corbin Kaufusi measured in at 6-8. But rumor has it that he sprouted a couple more inches while he was gone. It’s almost unheard of to see a player that tall on a football field. This had some Cougar fans pining for a trade with the basketball team, sending Kaufusi to Dave Rose for Luke Worthington who was an excellent offensive line prospect in Wisconsin before he signed to play basketball with the Cougars. But, according to recent Internet chatter, it appears that Kaufusi will join be joining the hoops team after all.

5. Is the long ball coming back to LaVell Edwards Stadium?

The Cougars will be breaking in a lot of new players this season, especially in the skill positions. If they are able to acclimate to life in Provo and to FBS competition, the Cougars offense could be explosive. Cougar fans are excited to see if the trio of Nick Kurtz, Devon Blackmon and Jordan Leslie will bring the deep ball back to Provo. Not since the days of John Beck tossing bombs to Todd Watkins and Austin Collie have the Cougars had a consistent home run threat. If the trio shows that BYU can go long, this should also open up the intermediate and short passing game.

6. Is this the year Cougar tight ends return to glory?

Harline’s still open! George is still running! Clay Brown in the Miracle Bowl! These are all great moments in Cougar history that involved tight ends. Those moments have been lacking the past few seasons. In the mid-2000s it seemed like whenever the Cougars needed a first down they would throw it across the middle to a tight end for an easy 15 yards, but that play has seemingly been eliminated from the playbook ever since George scampered into the end zone to defeat the Utes. With Devin Mahina returning for his senior season, there is hope among Cougar fans that the tight end position will return to the forefront.

7. Who will emerge as Taysom Hill’s backup?

With the departures of Ammon Olson and Billy Green in the offseason, questions arose about who would be Taysom Hill’s primary backup. Robert Anae has indicated that Christian Stewart is the BYU’s number 2 going into fall camp, but the lack of depth at that position is scary if Hill were to go down with an injury.

8. Will the Cougars improve in the red zone?

Last season BYU was abysmal in the red zone. Overall they ranked 63rd in red zone scoring percentage, which isn’t great by any stretch of the imagination. If you look closer, BYU only scored a touchdown on 48 percent of its red zone possessions, which ranked 115th in the nation. It is paramount for the Cougars to score touchdowns in the red zone if they are to be successful this season.

10 things to remember when your missionary comes home Next post