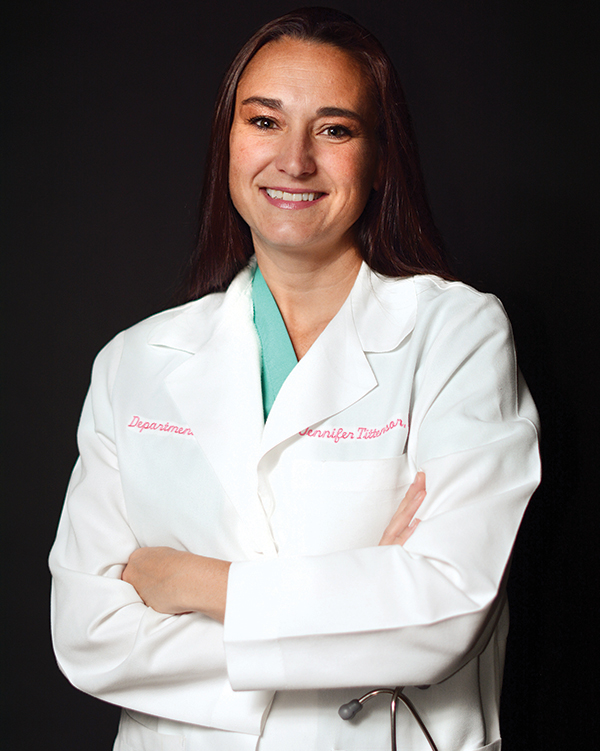 Dr. Jennifer Tittensor is the only female general surgeon in Utah County. Statistically speaking, Utah is behind the curve when it comes to female physicians. According to a 2012 report from The Utah Medical Education Council, 21 percent of Utah physicians (including residents and fellows) are female, compared to the national rate of 29 percent. (Photo by Dave Blackhurst)

Dr. Jennifer Tittensor is writing the prescription for women in medicine as the only female general surgeon in Utah County

In hollywood productions, surgeons are often stereotyped as egotistical, arrogant know-it-alls. But if you walk a mile in surgeon Jennifer Tittensor’s shoes, you’d quickly learn it’s less about being the hot shot of the hospital and more about being a risk-management strategist, a walking encyclopedia of human anatomy, the executive director of the surgical team and a patient advocate.

You would also be exhausted — her workdays average around 12 hours.

Growing up in Provo, Dr. Tittensor was interested in chemistry and math, which led her to medical school. Her desire to be a “doer” in the medical field led her to pursue surgery.

In her general surgery residency at the University of Arizona, she started making incisions on day one. When she became the chief resident, she learned about keeping calm and carrying on in stressful situations.

“There were times when we had every trauma bay with a serious injury,” she says. “You don’t have the time or luxury to freak out.”

In addition to managing the stress that comes with life or death situations, surgeons always have to be thinking of what complication could occur and how to fix it. Even in routine procedures, surgeons get handed surprises.

“Sometimes you open someone up for something simple like removing a gallbladder and find hundreds of tiny, cancerous tumors,” Dr. Tittensor says. “You have to be ready for anything.”

As the only female general surgeon in Utah County, Dr. Tittensor has also become a breast cancer surgical specialist since she came home to Utah to practice in 2006.

“I didn’t intend to become an expert in breast cancer, but after treating more women and seeing more breast cancer patients, it just happened,” she says. “Some female patients feel that I can empathize with them more than a male surgeon can.”

When breast cancer is diagnosed in early stages, the survival rates are relatively high — which means Jennifer often gets to form life-long relationships with patients she grows to love.

A big part of her job is also delivering life-changing news to her patients.

[pullquote]“I try to give them comfort, if their situation allows that I can do so. And when I can’t do that, I do my best to be upfront.” —Dr. Jennifer Tittensor[/pullquote]

“I try to give them comfort, if their situation allows that I can do so,” she says. “And when I can’t do that, I do my best to be upfront. Then I tell them the next steps and let things sink in. People are initially so shocked they won’t remember much of what I say. I am just happy when they leave my office feeling a little more peace.”

Dr. Tittensor is supportive when mentoring young women who are considering going into surgery, but she is also honest about the demands of the job. She is never completely off duty, even when she’s at her Highland home with her husband, Zach, and their two daughters, Darielle (9) and Kenzie (3).

“I’m lucky to have a husband who takes care of our girls and the house,” she says. “He has made sacrifices so that someone is always there for our daughters.”

Dr. Tittensor’s busy career also includes being a leader among her colleagues in her role as the Medical Staff President of Intermountain Healthcare. In this capacity, she meets with hospital administrators on a regular basis and acts as an advocate for her co-workers.

“I’ve learned a lot about the politics of medicine,” Jennifer says. “I hear about legislation that affects our industry, I learn about the insurance side of things, and I get to see the bigger picture. It’s easier to be more sympathetic to administration when you hear the whole story. At the same time, I definitely go to bat on certain things I think are important.”

Research and progress are important to Dr. Tittensor, and she has been involved in the use of a new technique — radioactive seed localization — that helps physicians locate and remove cancer more effectively.

She also gives back to her hometown through Community Health Connect, a local organization that gives low-income and uninsured patients free treatment from medical professionals who donate their time.

“The patients are extremely appreciative and I love being able to help them,” she says.

Made in UV: Princess aprons, planners and more Previous post