Home Life On the ball: Renee Tribe’s got game on the Utah County lacrosse scene

On the ball: Renee Tribe’s got game on the Utah County lacrosse scene 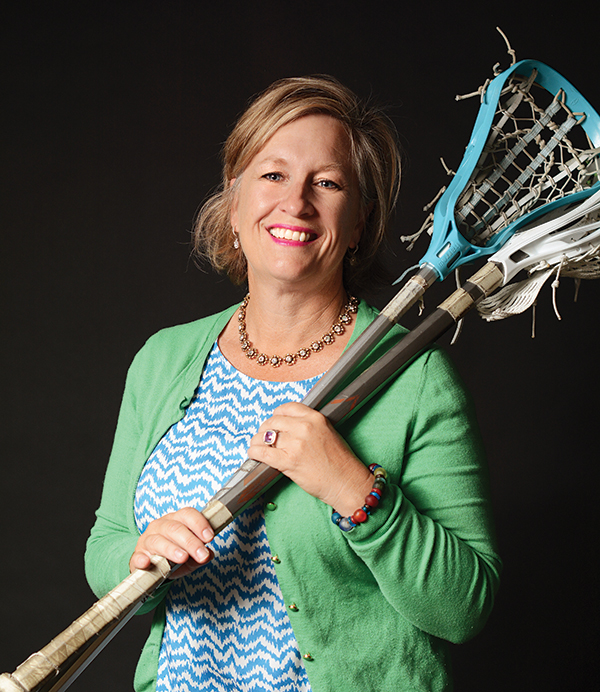 Renee Tribe grew up as a tomboy in a house full of girls. She liked to skateboard, and most of her friends were boys. It wasn’t until eighth grade that she thought, “I should probably wear a dress — I don’t look so bad in it.” Now,
Renee is the co-founder of the GULL lacrosse league and the mother of four boys and one girl. (Photo by Dave Blackhurst)

The world of sports is often portrayed as fiercely competitive and male-dominated. But when it comes to the Greater Utah Lacrosse League (GULL), a woman is leading the fierce competition.

Renee Tribe, co-founder and co-owner of GULL with Marty Wescott, has always been comfortable around guys and sports, but it wasn’t until her son started playing lacrosse in 2001 that Renee became a part of the sport she now eats, breathes and cradles.

A few years ago when Renee and Marty were involved in a lacrosse focus group together, they became serious about creating their own league.

“Marty and I just weren’t willing to drop it,” Renee says. “We kept asking questions and reaching out to people and gathering ideas. I had spent too much time on this and I knew too much — I was going to start a league. But I knew I couldn’t do it by myself.”

Prior to creating the lacrosse league, Renee was the youngest Gymboree Play & Music franchise owner in the nation at age 26. She also worked at an advertising agency in Silicon Valley and then went on to a financial firm where she was one of a few female employees. Renee still helps some of her previous clients, but it’s her experience running a household that truly prepared her to be a leader.

[/pullquote]“Women are assertive at home with their children by being organized, planning, setting ground rules and communicating,” she says. “When you get into a work environment, why would you fold? There’s nothing wrong with speaking up and sharing your opinions and ideas. Everybody has good ones.”

Renee also gained experience through volunteering. She’s served as president of parent-teacher programs and has been passionate about helping the community.

“I do what I say and say what I mean,” she says. “I gained a reputation of being able to get things done. We need to be more definitive in our talk. We’re all so wishy-washy sometimes. People ask me if I’m from New Jersey or New York all the time. They’re like, ‘You’re so different. You speak your mind.’ A lot of people appreciate that.”

When it comes to her straightforward personality, Renee and her husband, Troy, are similar. As type-A-color-red personalities, Troy and Renee have teamed together during their 28 years of marriage. She says his entrepreneurial spirit rubbed off on her, leading the couple to projects both together and separately.

“I couldn’t pursue all these hopes and dreams and ideas without a supportive husband,” Renee says. “He knows when to help me and he knows when to stay out of my way. That’s a good quality of any husband. We make a good team.”

Renee brings her team-orientation to GULL, which this past spring had 183 coaches — two of whom were women.

“I’ve taken an idea and made it happen and there’s a lot of satisfaction in that,” she says. “It’s not without its headaches and challenges, but it’s cool to look back and say, ‘I did that.’ I’m sure there are lots of women with hopes and dreams and they just don’t know how to go about it, but I think it’s OK to disrupt things in a good way.”

Managing the GULL league includes games, championships and clinics — all of which take a lot of work, attention and commitment.

But Renee says all of the effort is worth it because it is for the athletes. The Tribes still have former players come by their house to visit Renee and Troy (he has coached youth and high school level lacrosse teams as well).

“We do it for the kids at the core of it,” she says. “Lacrosse is such a great sport and we want more kids to have the opportunity to play and participate. There are so many great people who volunteer their time to come watch these kids, and they’re the ones who have the richer lives.”