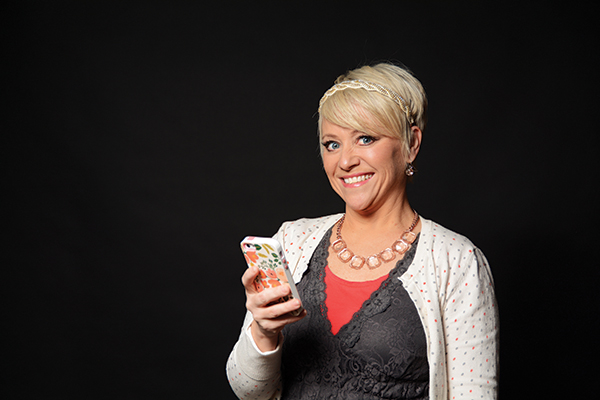 Orem’s Rhonna Farrer is more well-known by her app name — Rhonna Designs. She took her scrapbook layouts and turned them digital, and Instagram hasn’t been the same since. (Photo by Dave Blackhurst)

If you haven’t heard of the app Rhonna Designs, ask your wife, friend, or daughter — someone you know has it on her phone. And she’s no doubt using it to put your Instagram photos to shame.

In fact, during an Apple promotion where the app could be downloaded for free, Rhonna Designs was downloaded 300,000 times. But don’t think this app was an overnight success. It’s been 17 years in the making.

One year after graduating from BYU with a degree in art education, Rhonna and her husband, Jeff, left Provo and moved to Minnesota for Jeff’s graduate studies. Rhonna stayed home with their children but still looked for a creative outlet. Jeff asked what she would do if she could do anything she wanted.

“I told him I wanted to have my own line of greeting cards,” she says.

[pullquote]“When social media kicked in, I wanted to put art on the photos I shared. I thought others might, too.” —Rhonna Farrer[/pullquote]

With Jeff’s encouragement, her portfolio got off the ground. She then expanded her design line to include bags and accessories. In 2003, Rhonna took her ideas into the scrapbooking world. She developed hundreds of designs for scrapbooking pages, and she also kept them digitally.

“When social media kicked in, I wanted to put art on the photos I shared,” Rhonna says. “I thought others might, too.”

She launched Rhonna Designs, and it was quickly selected as one of the App Store’s Apps of the Week. In December 2013, Rhonna Designs added an Android version. Each month, Rhonna releases a new batch of designs available for in-app purchase of $1.

“If you would have asked me if I would be in the tech industry when I started designing years ago, I’d say ‘no!’” Rhonna says. “But technology has increased our ability to be creative on the go, and I’m thrilled it’s led me in this direction.”

One genius move by Rhonna was to include a hashtag (#rhonnadesigns) on each photo posted from her app. Talk about #genius. This automatic hashtag branded her app and built a community of users.

“Originally, I thought the 600 designs that come with the initial purchase of the app would be enough, but people keep asking for more,” Rhonna says.

Some of Rhonna’s fans have even influenced app updates, including high-resolution output and mirror rotation. She loves the collaboration and isn’t afraid of others succeeding in a similar space.

“There is room for everyone and I love using various apps,” Rhonna says. “I call it #appmashup.”

A key player in her success is Devin Pitcher, the app’s developer. The St. George-based app designer took what was in Rhonna’s imagination and put it into a usable format loved by thousands.

The app interface is true to Rhonna’s whimsical style with a feminine vibe and intuitive functionality.

Rhonna is excited to see where this adventure leads. She’s hired two collaborators who field questions and build the Rhonna Designs community. She makes videos and posts Rhonna’s Creative Recipes with a photo and step-by-step instructions.

5 social skills every child needs for school Next post