On patrol: One of Utah County’s few female police officers 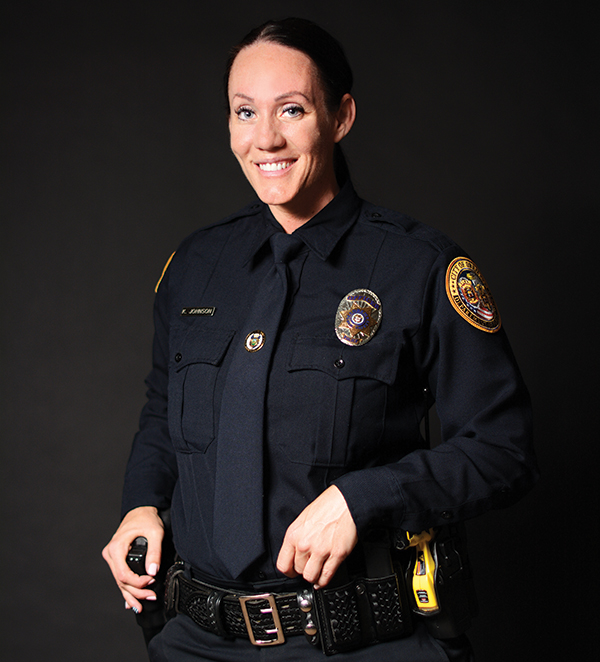 As a member of Utah County law enforcement for almost 16 years, Karalee Tracy is familiar with fear. But give her the choice between a crime scene and photo shoot and she knows where she’ll be. “I’m more afraid of having my photo taken than going into a firefight,” she laughs. (Photo by Dave Blackhurst)

There’s never a typical workday in law enforcement: one day it’s a headline-worthy trauma and the next it’s a noisy neighborhood dog.

Between the extremes, Karalee Tracy comes to work ready to face the day fearlessly as one of two women with the Orem City Police.

Karalee was born and raised in Delta, where her dad worked as a deputy. His example inspired Karalee to pursue law enforcement.

“I was around it my entire childhood,” she says. “I would dress up as a cop when I was 5 years old — that’s what I always wanted to be.”

Karalee spent eight years as a dispatcher for Provo City and has now been on the Orem Patrol for eight years. Her 16-year career in Utah County began when she came to UVU to study law enforcement. Two other women were in her classes, but she was the only one to pass and graduate.

“Many women can’t pass the physical fitness test — that’s where we lose a lot of women,” she says. “And a lot of them can’t emotionally handle what the job entails. It’s hard. There are days where you literally wake up with nightmares from what you have seen. There aren’t a lot of women who can handle that — and some days I can’t handle it either.”

To help her through the physical and emotional toll of work, Karalee turns to faith, exercise and her husband, Jeff, who also works in law enforcement.

Karalee and Jeff met through their shared careers and knew each other for six years before getting married. The Lehi couple makes home a safe place away from the stress of work.

“At work I don’t shy away from confrontation but at home I don’t like it,” she says. “It’s easy to go home because he doesn’t ask, he just knows. And it’s the same with him, I just know. He’s been there — he’s done the same calls and the same things.”

[pullquote]“We have to have humor and camaraderie to survive and cope with the things we do and see. But I give it as good as i get it.” —Karalee Tracy[/pullquote]

While there are calls Karalee wouldn’t choose to take, such as those involving child abuse, she knows her qualities as a woman bring a needed factor to law enforcement. She can de-escalate situations and bring a softer side that calms women and children.

“I’m not as scary or intimidating as the men — unless I need to be and then I don’t hesitate,” she says.

Karalee says while men and women bring different strengths to the field, her crew works well together, understanding each other’s struggles and teasing when necessary.

“We have to have humor and camaraderie to survive and cope with the things we do and see,” she says. “But I give it as good as I get it.”

Despite the stress, intensity and sometimes sheer terror Karalee has to face, she makes sacrifices for all the right reasons.

“We can do so much good in law enforcement, and that’s why I do what I do,” she says. “We’ve gotten kids out of abusive or neglectful situations, and we’re also able to be positive role models for little girls. They love seeing me.”

Karalee also likes to teach women that they can be powerful and feminine at the same time.

Hear and Now: Lori Ruth finds meaning and purpose in her life’s challenges Next post