Home Sports BYU 3 days to kickoff: Are you ready?

3 days to kickoff: Are you ready? 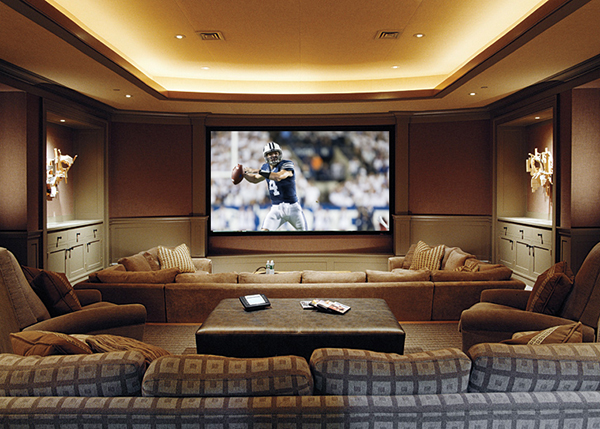 Growing up in the LDS Church, it was always hammered into my head to be prepared, whether it’s as a Boy Scout or for some impending natural or financial disaster.

But that’s not what this article is about. This article is to make sure you’re prepared for something way more important than the impending zombie apocalypse: Friday night’s game against UConn.

Below are a few essentials to ensure your viewing party goes off without a hitch.

The most important item for any football viewing party is a large HD television. The bigger the better!

My cousin and her husband, for example, have a 120-inch theater room screen. I’m not saying you have to go that big, but it can’t hurt.

If you don’t have a large TV, be sure to secure an invite from a friend who does.

But if you’re one of those guys who’ve cut the cord to cable and can’t stop talking about how much better your life is now that you’re not tethered to the boob tube, don’t even bother asking. No one likes you anymore.

In the days of smart phones, laptops and tablets, one screen just isn’t enough. So be sure to have your device of choice on hand so you can text, tweet and be part of the conversation online. One thing I like to do is have a couple of disses chambered in my drafts folder, so you can seem fast and witty when talking smack to your opponent. 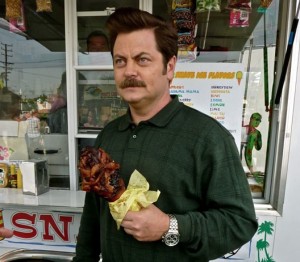 You had me at meat tornado

Side dishes are nice for the ward potluck, but football season is all about the meat.

This is the time of year where we need to channel our inner Ron Swanson. It might take a little more effort, but what I like to do is smoke a pork butt or large brisket. With the right amount of smoke and love, your friends will be singing your praises for days.

A couple of years ago a ragtag group of youngsters who go by the moniker Y.N.RichKids, penned an anthem for snack lovers everywhere titled “Hot Cheetos & Takis.” These kids definitely have their priorities straight!

In this life, the most important pursuit is figuring out how to get your next snack fix. Once your guests have recovered from the meat-induced coma you put them in, they will need salty snacks and ice-cold beverages to satiate their hunger and quench their thirst.

Be sure you have bags and bags of chips, nuts and pretzels on hand. During football season, don’t even think of going Paleo!

One of the most important skills you can acquire in your lifetime is the ability to use the previous channel button on your remote control.

With the advent of DVRs no one can tolerate watching commercials, so the ability to bounce back and forth between sporting events without missing any action is key.

To ensure a seamless transition between games it is paramount that you research who else is playing and on what channel so you don’t have to mess with the guide and risk seeing yet another Viagra commercial.

Earmuff it for me

Speaking of remote controls, I have broken my fair share while watching sporting events.

The first quarter against Hawaii in 2001 comes to mind.

[pullquote]It’s during times like that where I channel my inner J. Golden Kimball and “a steady torrent of obscenities and swearing” flows out of me.[/pullquote]

It’s during times like that where I channel my inner J. Golden Kimball and “a steady torrent of obscenities and swearing” flows out of me.

As a father of three, this is not something I’m proud of. To avoid this, I suggest either sending the wife and kids away during game time or provide them with earplugs so they won’t be exposed to the vitriol that might spew from your mouth.

No excuses — even if you’re a hermit like me who works from home and never leaves the house, you should be adorned in Cougar blue from head to toe on game day.

When the Cougars play an away game, we don’t have the benefit of the opening prayer like we do at LaVell Edwards Stadium, so I constantly have a prayer in my heart to help the team.

It’s probably not good that I’m bargaining with God that if we score here or make a big stop that I’ll be sure to be a 100 percent home teacher next month.

I mean nobody’s perfect and every little bit helps, or at least that’s what I tell myself.

A Pixar-inspired short with a Christian theme Previous post