15-year-old BYU recruit off to hot start for Westlake

Despite Chaz Ah You being a mere 15-years-old and his address being in the unsung Utah County town of Saratoga Springs, Utah — hardly a hotbed of local prep football talent — the Westlake High sophomore is known by the majority of head football coaches in the Big 12, Pac 12 and beyond.

This is the beginning of what will certainly be a hotly contested recruiting battle.

And it’s going to end with someone from BYU, Utah or any of dozens of out-of-state colleges with a broken heart.

Ah You, who’s ranked the No. 11 overall high school football recruit by 247Sports.com, has the size, athleticism and heart to attract attention from all corners of the college football spectrum. 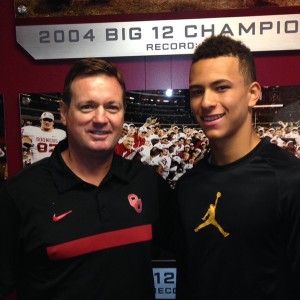 Chaz Ah You is being recruited by numerous Big 12 schools including Oklahoma and head coach Bob Stoops.

It’s true the Westlake athlete made his mark as a free safety a year ago. This season, however, Ah You is relishing the chance to return to his first love on the football field.

“It was actually my original position,” Ah You said. “I played quarterback all through little league. Last year was my first year playing defense. It’s nice to be back. I feel really comfortable back there.”

Ah You made his varsity debut at quarterback in the Thunder’s season opener — a 40-20 win over Spanish Fork. During that game Ah You rushed for three touchdowns.

This last Friday night Ah You’s Westlake team took down Ogden 45-0. Ah You rushed for two more scores and threw for two touchdowns during that game — giving him five rushing touchdowns and two passing TDs on the year so far. 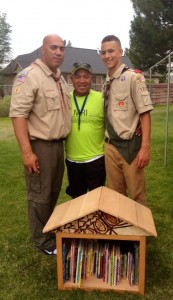 Although Chaz Ah You is an excellent football player, he still finds time to lead a balanced life.

Thunder coach Steve Clements, a former BYU quarterback, says Ah You is naturally dynamic as an athlete. Clements believes the sophomore has the tools to develop into a potent dual-threat quarterback as the season progresses.

Ah You made a name for himself in the Westlake secondary a season ago. He registered 42 tackles and an interception as a freshman in 2013.

These family members and others have had an impact in helping Ah You develop his football skills to their full potential.

Ah You is doing his best to live up to those expectations. His number one goal at the moment is to make sure Westlake does not finish at the bottom of Region 4 again this season.

Given how Ah You’s teammates view him, he might be just the player the Thunder need at the controls to climb that region ladder.

“The kids really respect him,” Clements said. “He does the right things. He’s a good character kid and comes from a really good family.”

Helping kids love the temple at every age Previous post

How to lean in to your career AND motherhood Next post