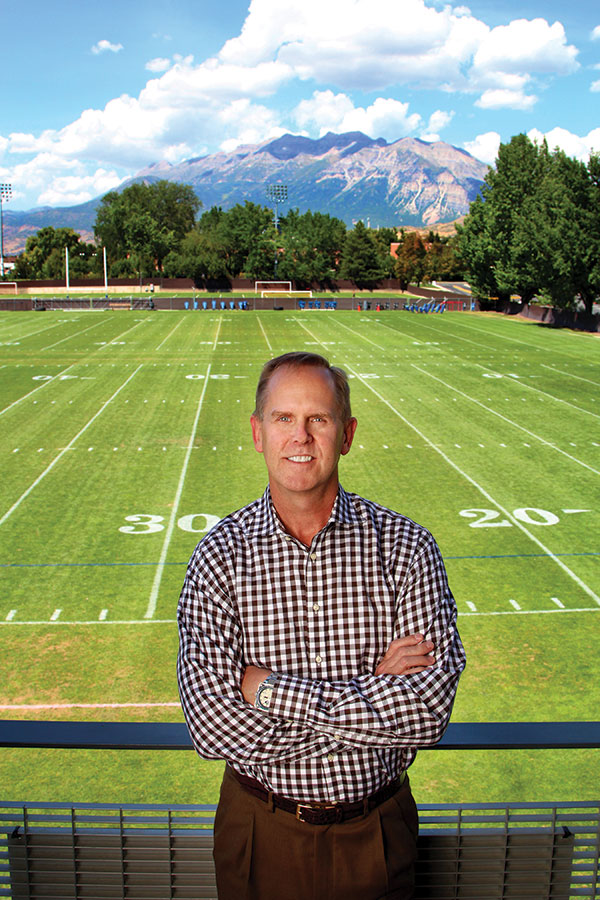 Tom Holmoe’s favorite part of his job is interacting with the student-athletes.

Tom Holmoe has been Athletic Director at BYU for 10 years, and his favorite job description has everything to do with the players.

“I arrived at AD in a different fashion — others have come through fundraising or compliance,” he says. “I came through being a player and a coach. My experience and my passion is with the athletes.”

He likes to hop in the dugout and be on as many sidelines as possible. And he talks to the basketball players after their games — “win, lose or draw.”

“I like to be with the athletes and coaches,” he says. “There aren’t too many things they come up against that I haven’t already seen or experienced.”

Tom conducts exit interviews with senior athletes to express gratitude and welcome them to the role of BYU alumni. He asks them to rate their BYU experience on a scale of 1 to 10. Most say 8 or 9. Almost nobody says 10. “It’s not perfect here,” he says. In fact, 20 percent of the student athletes didn’t have the experience they were hoping for, but Tom doesn’t shy away from student difficulties.

“If I’m at my computer all day answering emails, that’s not a great day,” he says. He much prefers heading to the baseball field or the soccer field or the indoor practice facility where he maintains his role as administrator and cheerleader — not “coach.”

“Bronco has a crazy-hard job,” Tom says. “We are very different, but we get along great and I have tremendous respect for him. I don’t give him the Xs and Os. Sometimes he’ll ask me what I think or if I’ve noticed certain things. But I let him coach.”