Listen up lookalike lovers — we’ve got a collection of not-so-evil twins who are carbon copies of their celebrity counterparts. From Matt Damon to Ferris Bueller, these separated-at-birth local lookalikes will leave you starstruck. 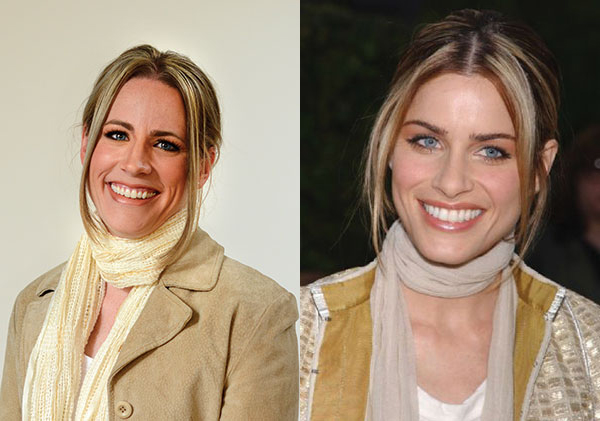 Who is Amanda Peet?

Amanda Peet is a film, stage and television actress who has appeared in films including “Saving Silverman” and “Something’s Gotta Give” as well as TV shows including “The Good Wife.”

My husband showed someone a picture of us and was asked, “Did you meet Amanda Peet when you were in California?”

Are you a fan of Amanda peet?

Yes! She seems to have a spunky and fun personality.

I previously worked at a bank, and a customer stared at me and said, “Wow! You look just like the girl in ‘The Whole Nine Yards!’” I hadn’t seen it so I had to go home and Google it. That’s when I first learned Amanda Peet’s name.

It would be fun to hang with co-stars like Jack Black, Ashley Judd, Bruce Willis, Diane Keaton, Matthew Perry, Morgan Freeman, Melissa McCarthy, and Ben Affleck — and let a studio pick up the tab!

FUN FACT: Tami and Amanda both spent time growing up in New York and love eating out.

Who is Matt Damon?

Award-winning actor, screenwriter and producer Matt Damon has starred in “Good Will Hunting,” “Saving Private Ryan,” the “Ocean’s” trilogy and the Bourne series. In 2007 he was named the Sexiest Man Alive by People Magazine.

My neighbor Charise was the first to notice. She said, “Hey, I was watching ‘The Bourne Identity’ last night and was blown away by how much you look like him.” I looked at the DVD cover and thought, “Yeah I can see that.” I could do a lot worse than Matt Damon.

Right after the first “Bourne Identity” came out, I couldn’t go anywhere without people mentioning it. In Las Vegas, someone in a casino actually thought I WAS Matt Damon. I regret that I didn’t play it out. I should’ve taken the photo and given the autograph.

If you could live your lookalike’s life for one day, what would you do?  I would go through his phone, call up all the boys — Brad Pitt, Matthew McConaughey, Leonardo DiCaprio, Ben Affleck and we’d all go out for a night down the Sunset Strip. I’ll let the audience decide what would happen with a wolf pack like that howling out on the LA streets at night!

FUN FACT: The one major difference between Matt Damon and Sean? Matt Damon is from Boston, which means he likes the Celtics and Red Sox, while Sean is a Los Angeles Lakers and New York Yankees fan.

Who is Rick Moranis?

Canadian actor Rick Moranis is best-known for his role in “Honey, I Shrunk the Kids” and its sequels. He has also been in “Strange Brew,” “Ghostbusters” and “Spaceballs.” Rick is a Grammy nominated musician.

When did you first notice you were a lookalike?

Only after other people pointed it out.  I have to admit I do see a resemblance.

Who first noticed the resemblance?

During my college years, perfect strangers would come up to me and say, “Hey, you look like Rick Moranis.”  My initial reaction was “Do I really?” but this happened so frequently I became used to it.

What is the craziest experience you have had as a celebrity lookalike?

I went to the “Honey, I Shrunk the Audience” exhibit at Disneyland and caused quite a stir. Several children were pointing at me and whispering,“Look, it’s him!”

Are there similarities between you and rick other than your physical appearance?

We both have lived in the micro world and we both like silly songs.

FUN FACT: Michael is a scientist in real-life, just like his celebrity look-alike in “Honey, I Shrunk the Kids.” 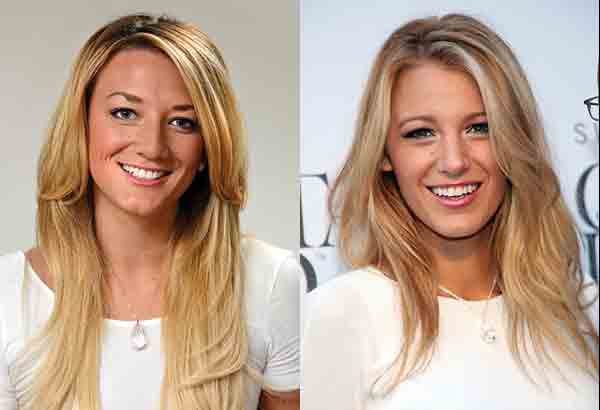 Who is Blake Lively?

Blake Lively stars as Serena in the teen series “Gossip Girl.” She has been in “The Sisterhood of the Traveling Pants,” “The Private Lives of Pippa Lee” and “The Town.” Blake met her now-husband actor Ryan Reynolds on the set of “Green Lantern.”

When did you first notice you looked like a celebrity?

I didn’t really believe it until everyone was saying I looked like her.

What is the craziest experience you have had as a celebrity lookalike?

I was in New York, and my driver was taking me to the airport. He could not get over the fact that I wasn’t her. He kept asking over and over, “Are you sure you’re not her?” Which I thought was so funny.

Are there similarities between you and blake other than your physical appearance?

We’re both very family oriented and she’s never been in the party scene, which I love about her. I’ve read that she doesn’t care what people think about her or how she dresses and that’s how I’ve always been.

Who first noticed that you resembled a celebrity?

About six years ago, I was working with a bunch of photographers and producers, and they went crazy over how much I looked like her. To be honest, I didn’t even really know who she was.

Probably hang out with her husband, Ryan Reynolds and have lots of fun if you know what I mean 🙂

FUN FACT: Whitney has won other lookalike contests due to her resemblance to Blake Lively. 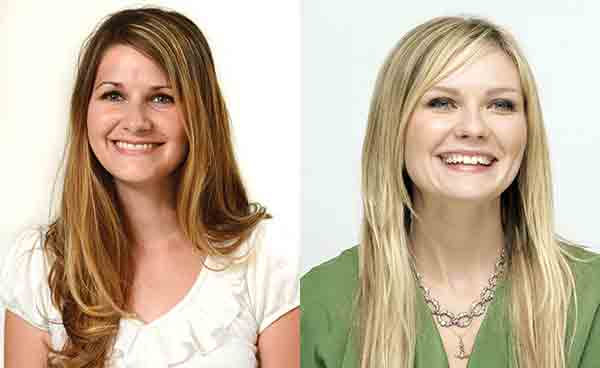 Who is Kirsten Dunst?

Kirsten Dunst’s breakout role in the film “Interview with the Vampire” put her on the map with a nomination for a Golden Globe Award for Best Supporting Actress. She went on to star as Mary Jane in the “Spider-Man” trilogy.

When did you first notice  you looked like a celebrity? It all started in high school. Everyone said I looked just like Kirsten Dunst. I went home and watched every movie of hers. I was given the nickname of MJ, after Mary Jane, the character Kirsten plays in the Spider-Man movies. I even went to a few school dances dressed up as Mary Jane.

What is the best experience you have had as a lookalike? One time at a party someone was convinced I was her! I went along with it, because it was pretty funny. By the end of the night I had signed a few autographs and was in a few pictures.

Are there similarities between you and kirsten other than your physical appearance?

We both have the same ethnicity — Swedish and German.

If you could live kirsten’s life for one day, what would you do? Make another Spider-Man movie!! I can’t get enough!

FUN FACT: Shantell went to a few school dances dressed up as Mary Jane, the female lead in “Spider-Man.”

Who is Ferris Bueller?

When did you first notice you were a lookalike?

Three years ago my friends and family started to tell me I looked like Ferris Bueller.

What is the best experience you have had as a lookalike? When a pretty girl told me I looked like Ferris Bueller.

Who first noticed you resembled a celebrity? What WAS YOUR Reaction?

My aunt and uncle told me first.  They had just watched the movie and couldn’t get over how similar we looked.  My reaction was to Google Ferris Bueller.

If you could live your lookalike’s life for one day, what would you do? I would start off by having the best sleep-in ever — I’d probably sleep till 2. Then I would get my friend. We would rampage throughout the city in his father’s Ferrari, and we would party with all of the prettiest girls around. Let’s just say it would be awesome!

FUN FACT: Jaden has two sisters, but unlike Ferris, he loves watching out for them. 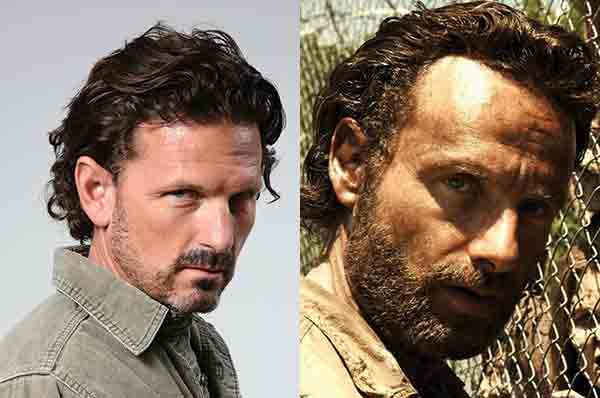 Who is Andrew Lincoln?

English actor Andrew Lincoln is best known for his portrayal of the character Rick Grimes in the AMC television series “The Walking Dead.”

Are you a fan of your celebrity lookalike? Sure. I think he does a great job playing the character Rick Grimes and I’m impressed with his ability to imitate an American accent.

Are there similarities between you and your lookalike other than your physical appearance? We are close to the same age. He is married to the daughter of a rock star, and I am married to a rock star.

Who first noticed that you resemble a celebrity? My sister-in-law, Cyd LeMone, who is a huge fan of “The Walking Dead.” I laughed, we debated, Cyd won. Cyd always wins.

If you could live your lookalike’s life for one day, what would you do? Are you kidding, I’d slay some zombies! 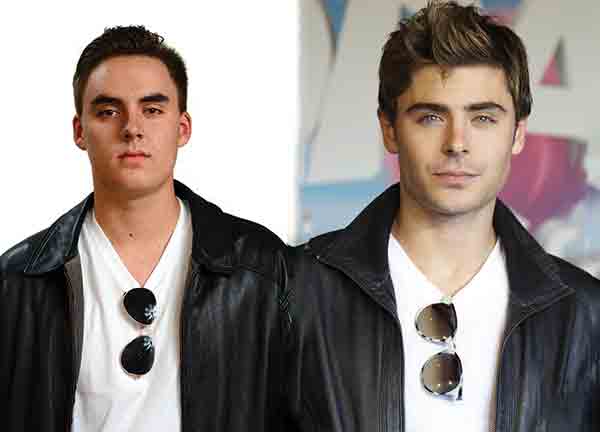 Who is Zach Efron?

Teen idol Zac Efron is an actor and singer best known for his lead role in the Disney Channel Original Movie “High School Musical.” He has starred in “Summerland” and the 2007 film version of the Broadway musical “Hairspray.”

When did you first notice you looked like a celebrity?

When I was about 12 years old, my friend’s mom said I looked like Zac Efron.

Are you a fan of your celebrity lookalike?

Yes, I watched all the High School Musical movies back in the day.

Are there similarities between you are your lookalike other than your physical appearance?

Personality and attitude. I wish I had his six pack!

I would fly to Switzerland and ski the Alps, maybe buy an expensive sports car and eat pizza all day long.

Chalk it out: Chalk the Block returns to the Shops at the Riverwoods Next post