3 reasons BYU could be in for a letdown against Houston 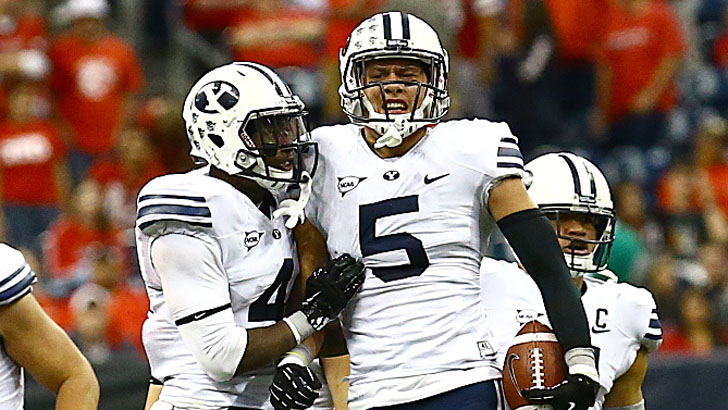 Fua, starting outside linebacker for BYU, celebrates with teammates during BYU’s narrow victory over Houston in 2013. (Photo courtesy BYU Photo)

Most Cougar fans are probably still basking in the afterglow of BYU’s epic beat down of Texas for the second year in a row, but just how long will that joy last? If history bears itself out, not much longer.

Below are three reasons the Cougars could be in for a letdown this week against Houston.

1. Third time’s not a charm

Despite all of the success Bronco has achieved at BYU, his teams have often struggled out of the gate — most notably in the third game of the season where he has compiled a 1–8 record.

The games have run the gamut from heartbreakers against TCU, Boston College and Tulsa, to blowouts against Florida State, and most recently losses the past three seasons against Utah.

2. Houston, we have a problem

Luckily, the Cougars won’t be facing the Utes this season, but a victory against Houston isn’t a foregone conclusion.

Last year, BYU was lucky to escape Reliant Stadium with a win, needing a 28-yard touchdown strike from Taysom Hill to Skyler Ridley with just under 2 minutes to go to seal the one-point victory over the Cougars in red.

The good news for BYU is that O’Korn and the Houston offense struggled early this season, losing to University of Texas-San Antonio in its opener before recovering with a blowout victory against Grambling.

The last time BYU opened the season with two victories on the road was 2009, when the Cougars went into Jerry World and beat Oklahoma and then followed it up with a win against Tulane.

That year BYU came into its home opener with a lot of hype and hope for a special season, but that hope was quickly dashed when Florida State came to town and capitalized on five Cougar turnovers to earn a 54–28 victory.

It will be interesting to see how this year’s team responds to success. It is a small sample size, but they seem to be more prepared and focused than in years past. The offense already seems to be in midseason form and the defense, despite the loss of several starters and key contributors from last year, has been solid.

But we still don’t know how this team will react when the chips are down. Even though the offense sputtered somewhat in the first half against Texas, the team has yet to trail this season. Will they founder like in years past or show resolve like they did in eking out a victory against Houston last year. My guess is the latter rather than the former, but only time will tell.